Boy, Do We Get Mail…

The U.S. House of Representatives yesterday voted in favor of a resolution formalizing the impeachment process against President Trump. Debate on the House floor was fractious, which prompted me last night to re-watch Frank Capra’s political melodrama Mr. Smith Goes to Washington (1939).

In this iconic movie, public opinion is symbolized by overflowing baskets of letters. The image prompted me to answer reader letters today. In my case, the apt image would be a rapidly filling email inbox. Digital or hard copy, it’s all the same.

I’ve been overwhelmed lately with emails from readers… and that’s a good thing. My high volume of reader email shows that Mind Over Markets is grabbing your attention in a meaningful way.

I strive to create an interactive community with my readers, because your questions and feedback help make this newsletter more relevant to your investment needs.

As of this writing Friday afternoon, all three main U.S. stock indices were trading sharply higher, after today’s U.S. employment report for October beat expectations. The S&P 500 and Nasdaq hit fresh records and the Dow Jones Industrial Average was up by more than 200 points. But let’s step back from the daily gyrations of the market.

Now’s a good time to dive into my figurative “mailbag,” to address a few timely letters that stood out. In my answers, I’ll pinpoint some of the surest ways to profit from this relentless bull market.

“There’s an interesting article in the October issue of the American Association of Individual Investors journal that contrasts ‘old era’ and ‘new era’ business spending over decades. Conventional manufacturing and related equipment purchases have been flat since 2014, whereas IT equipment and intellectual property products have risen steadily since 2002.

You’re right: the global implementation of 5G wireless technology is one of the biggest investment opportunities you can find. For our special report on 5G, click here. The report reveals a $5 stock that conveys staggering growth potential. The following chart tells the story about 5G’s growth trajectory: 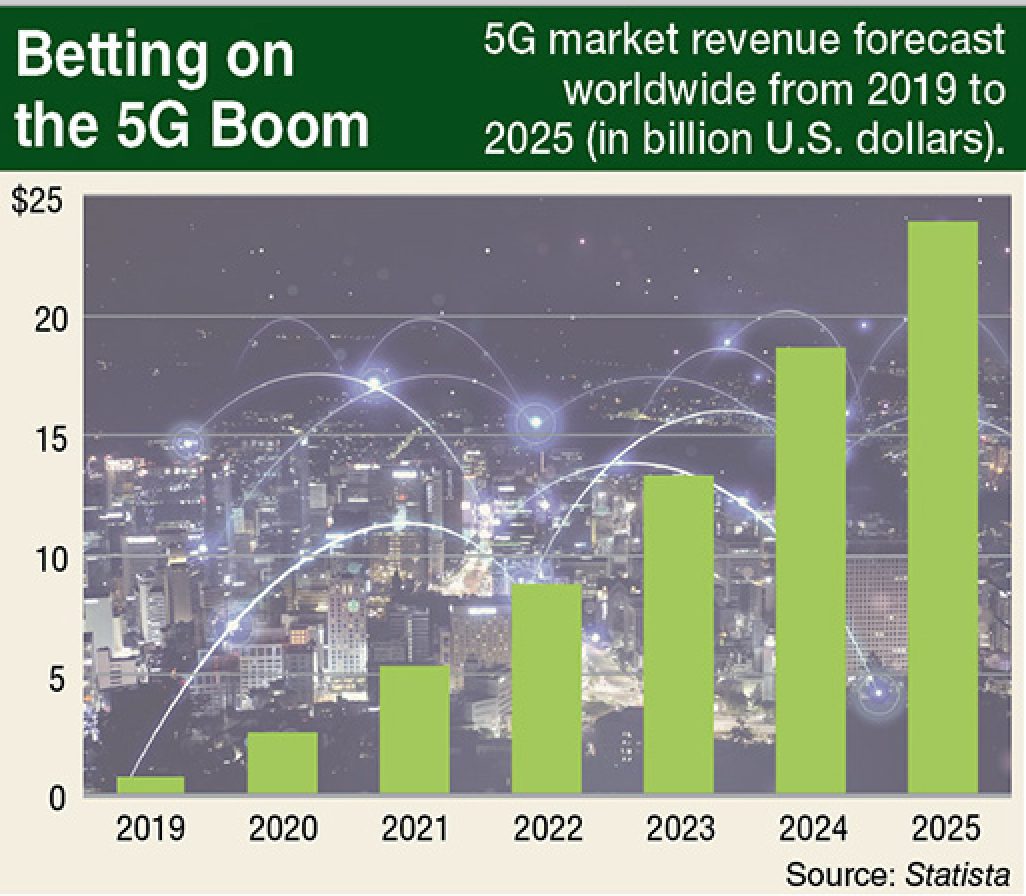 Technology for 3D-sensing also fits the bill as a new-era investment. Makers of chips and other components that support three-dimensional sensors embedded in smartphones face growing demand. These capabilities are crucial to the exploding field of virtual/augmented reality, which is migrating beyond video games and into commercial applications.

“Average corporate earnings results this quarter are not as bad as feared and they’re beating expectations. You keep saying the market is overvalued, but won’t this trend keep the bull market aloft?” — Tom A.

Tom, let’s hop into the “way back machine” and set the controls for the year 2000, when Federal Reserve Chairman Alan Greenspan made this pronouncement:

Yeah. Sure. Right. Instead of going up and up and up, as Greenspan predicted, the market that year fell and fell and fell. And then fell some more. In fact, his expectations turned out to be so wrong, he later admitted that his essential beliefs about the market, patterned after the laissez-faire philosophies of Ayn Rand and Adam Smith, were shaken to the core. It was a startling admission for a powerful man once seen as virtually infallible.

The projected earnings decline for the third quarter of 2019 is -3.7%. As for the high percentage of companies that are beating expectations this earnings season, that’s something of a con game. Corporate managers habitually set the bar low, so they can more easily beat estimates and get a lift in share prices.

The forward price-to-earnings ratio (FPE) for the S&P 500 is 17.1, which is above the five-year average (15.1) and the 10-year average (14.0). At first glance, the current FPE doesn’t seem to be all that much of whack, but consider the fact that earnings growth is expected to come in at -3.7% this quarter, after posting negative growth in the first and second quarter. The fourth quarter isn’t expected to be much better. An “earnings recession,” combined with high valuations, is a dangerous mix. Hedge your portfolio and stick to quality.

“After losing half my position in Aurora Cannabis I’m looking to buy back in. I got a house call at $4.65. My belief is ACB will drop until its Nov. 11 earnings release date followed by a drop on Nov. 12, because I do not think they will be cash flow positive just yet. What are your thoughts on this matter?”— Ken D.

Ken, securities law prevents me from giving you individualized investment advice. But I can tell you that I’m long-term bullish on Canada-based Aurora Cannabis (NYSE: ACB, TSX: ACB).

Aurora Cannabis produces and distributes a wide variety of medical marijuana products, which is a hot industry right now.

I like Aurora’s business model. The company’s products consist of dried cannabis and cannabis oil, CanniMed vegan capsules, and hemp products. The company also sells vaporizers, vaporizer accessories, and herb mills. The firm strives to create distinctive consumer brands, which is what cannabis companies must do to survive.

Another enticing aspect of Aurora is its suitability as a takeover target. The fast-growing marijuana industry is consolidating. A major drug or consumer foods/beverage company could come along as a suitor for ACB, attracted not just by the company’s broad product portfolio but also by its entrenched foothold in Canada, which has legalized marijuana at the federal level.

America’s northern neighbor holds strategic value in the booming marijuana industry. If the federal ban in the U.S. is removed (and I think it’s only a matter of time), a company with a supply chain throughout North America would hit the jackpot.

Overall, the marijuana industry is the source of huge potential profits, if you know where to look. That’s why we launched a new investment advisory that provides the latest, most promising marijuana plays available. This publication is called Precision Pot Trader.

We’re so confident about the money-making potential of this publication, we’re offering you a bold promise: if you don’t get 52 “turbo” pot trades from Precision Pot Trader in the next year, which averages out to a triple or quadruple-digit profit opportunity once a week, let us know and we’ll give you another year of the publication, on the house.

Want to find the best pot stocks, for market-crushing gains? Click here to get started.

John Persinos is the managing editor of Investing Daily. He also serves as the editor-in-chief of Marijuana Investing Daily, which covers the latest news and trends in “canna-business.” You can reach John at: mailbag@investingdaily.com