GE: Cash Flow Brings a Good Trade Back to Life

Earlier this week, I shared with you a trade I made in my personal account that worked out great. Two months ago, I bought a long-term call option, or “LEAP,” on Tata Motors (NYSE: TTM) that has gained 150% since then.

In that case, my timing was just about perfect. But that isn’t always the case. Sometimes, I have to wait a lot longer to score a fat profit.

Today, I’ll discuss another LEAP trade I made a year ago that is still at breakeven. That’s bad news for me, but it may be good news for you since it isn’t too late to get in on it. 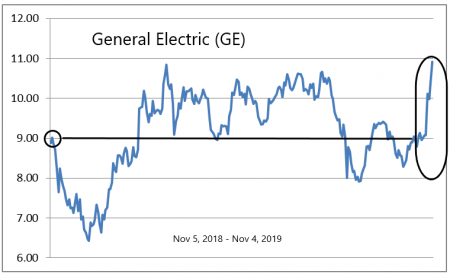 In November 2018, I bought a LEAP on General Electric (NYSE: GE) when the stock was trading near $9. I believed then that GE was close to bottoming out after losing half its value over the preceding 12 months.

In this case, my timing on General Electric’s stock price was premature. One month after I bought my option, GE bottomed out below $7. I could have paid a lot less for my option if I had waited until then.

Less than three months ago GE was trading below $8. The stock market simply wasn’t buying what CEO Larry Culp was selling. That is, until a few days ago. After releasing better-than-expected Q3 results on October 30, GE is up nearly 20%.

This week, that same option could be bought for exactly what I paid for it a year ago. I haven’t lost any money on this trade yet, but I haven’t made any, either.

You may be wondering why my option is not worth more than I paid for it. I bought it when GE was near $9 and today it is closer to $11.

Although I now have nearly $1 of “intrinsic value” in my option, I also have only 14 months until it expires. Intrinsic value is the positive difference between the strike price of an option and the current share price of the underlying security.

A year ago, my option had no intrinsic value but it did have more than two years until it expired. Until a week ago, the past year was basically a waste of time.

What I gained in share price appreciation, I lost in time decay. In this case, twelve months of time decay was equal to a $2 rise in GE’s share price.

That means I can make the same decision today that I made a year ago. If I am no longer confident that GE will rise above $12.40 within the next 14 months, I can sell my option and get all my money back.

I’m not going to do that. I like the way Culp is running the company and believe General Electric will continue to show improvement through next year.

Culp was wise to take his medicine last fall, while the stock market was going through a correction. He cut the quarterly cash dividend to a penny and sold off under-performing assets.

Now, the company is starting to show some life. Along with better-than-expected Q3 earnings, GE raised its cash flow guidance for 2019 by at least $1 billion.

With only three months left in the year, General Electric wouldn’t make that bold of a prediction unless it already knew it could achieve it. So, I’m not worried about how its Q4 numbers will affect the value of my option.

What I am worried about is another stock market correction. Despite its huge drop in value, General Electric is still a component of the S&P 500 Index. If the index takes a hit, so will most of the stocks that comprise the index.

At this point, there isn’t much I can do to guard against that risk. Sure, I could buy a put option on General Electric at the same $10 strike price also expiring in January 2021.

On the downside, GE would have to fall below $6.60 for me to recoup my investment. I don’t think that could happen unless the stock market completely crashes next year.

So, I’m just going to wait it out and hope for the best.

We’re so confident about this publication, we’re making you a bold promise: if you don’t get 52 “turbo” pot trades from Precision Pot Trader in the next year—which averages out to a triple or quadruple-digit profit opportunity once a week—let us know and we’ll give you another year of the publication, on the house.

Want to find the absolutely best pot stocks, for market-crushing gains? Click here to get started.