I now turn your attention to hemp, a highly versatile plant that’s often ignored by Wall Street and the media. Hemp, a cannabis cousin of marijuana, has gotten a bad rap for many years. However, I view hemp as “the next big thing.”

You don’t read much about it, but hemp is an emerging investment theme that offers market-beating gains far into the future. Companies involved in growing and utilizing hemp occupy a promising niche, as the hemp plant gains respectability and increasingly becomes a cash crop and base material for a huge variety of products.

The fact that most people don’t pay much attention to hemp is welcome news for you as an investor, because public companies involved in the hemp industry haven’t been bid to the nosebleed heights we’re seeing with marijuana.

Hemp received a major tailwind with passage of the 2018 Farm Bill. Signed into law on December 20, 2018 by President Trump, the sweeping agricultural legislation essentially decriminalizes hemp.

Growing industrial hemp became illegal in the 1970s when the federal government strengthened the criminal code on marijuana and related products. Hemp got caught up in the “war on drugs,” but it contains very little of the psychoactive component tetrahydrocannabinol (THC) found in marijuana that makes people high.

Hemp vs. Marijuana: What’s the Difference?

Most people are confused about the difference between hemp and marijuana. Let’s first get the terminology straight.

Cannabis the drug and hemp the industrial product both contain THC, but they are distinct strains with unique chemical compositions and uses.

Hemp is naturally high in cannabidiol (CBD) and low in THC; the reverse is true of cannabis. Hemp has a long and illustrious history: people first spun the plant into usable fiber 10,000 years go. Many academics believe that hemp was the first crop ever cultivated by mankind and served as a catalyst for the earliest innovations in civilization.

Hemp is the strongest natural fiber in the world and boasts up to 50,000 uses, as this chart shows: 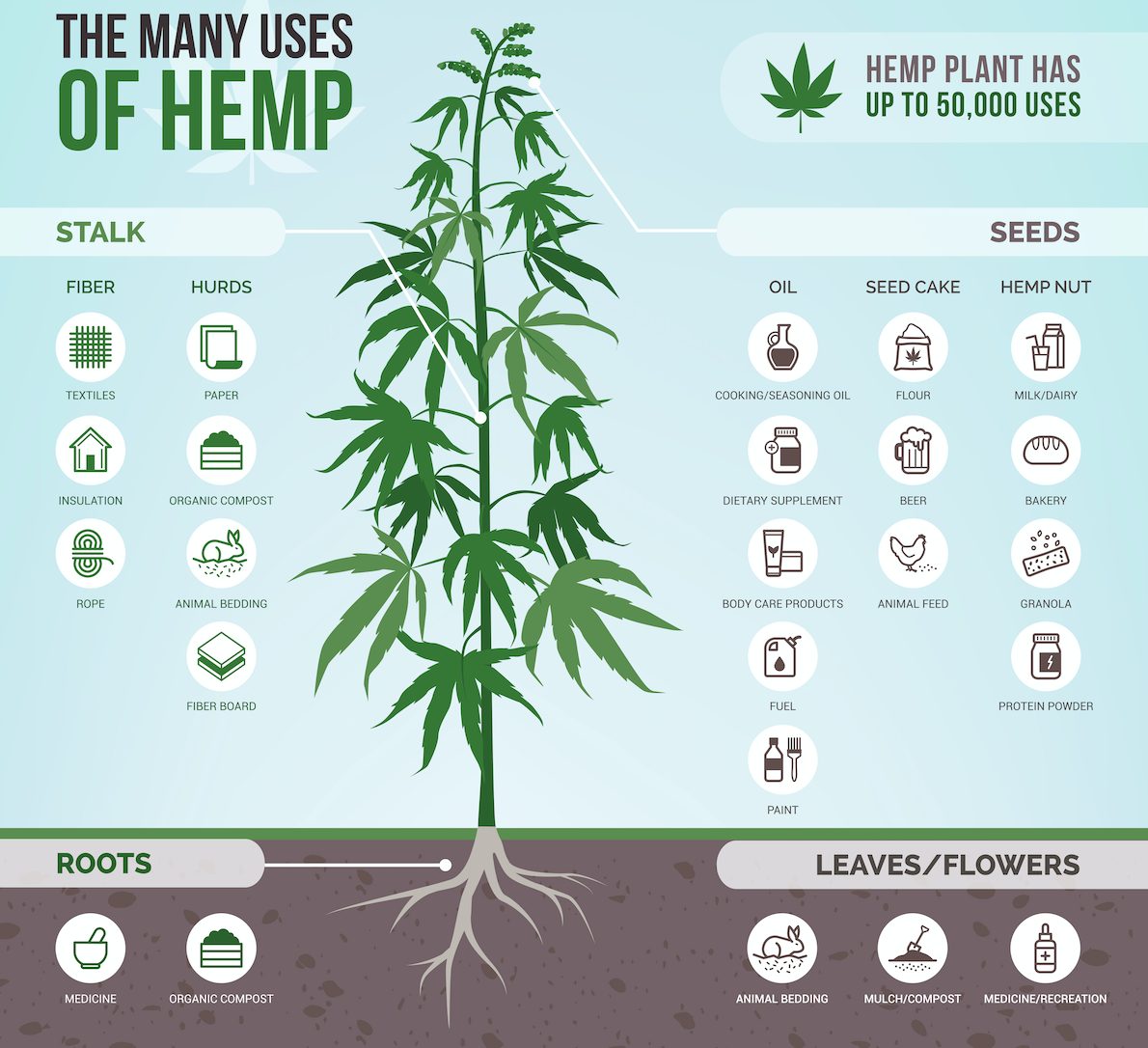 Ever since that landmark U.S. farm bill legalized hemp, the plant has gone mainstream. Case in point: On Monday, November 4, a senior official with the U.S. Department of Agriculture (USDA) said that the hemp industry “has clearly shown interest” in paying fees to promote hemp. The idea among the USDA and hemp growers is to roll-out a nationwide marketing campaign to publicize the virtues of hemp.

Consumers are starting to realize that hemp confers many health benefits. The plant is an abundant source of omega-3 and omega-6, proteins, and amino acids. These nutrients assist with cardiac function, mood stability, insulin balance, and skin and joint health. Companies in the consumer foods, health services, and cosmetics industries are taking notice and increasingly infusing their products with hemp.

It’s only a matter of time before hemp becomes a nationwide health fad, with the friendly help of a federal government that once banned it.

As such, hemp would be regaining its former glory. For centuries, hemp has been one of the main crops grown around the world. Ancient societies especially prized hemp for its medicinal purposes. (Fun fact: In 1533, King Henry VIII commanded farmers to grow hemp or face a fine.)

Get out the picks-and-shovels…

When an industry is subject to massive hype, as we’re seeing with cannabis, shrewd investors turn to the “picks-and-shovels” plays. These plays are especially appealing in the hemp industry, which is more agricultural in nature that the marijuana business.

Picks-and-shovels is a Wall Street term that refers to the 19th century California gold rush, when the few people who actually got rich weren’t the prospectors themselves — they were the shopkeepers who sold the picks and shovels to the gold-seekers.

Worried that an economic recession is about to hit? The growth trajectory of hemp appears unassailable, offering a safe haven of “defensive growth.”

According to the research firm Research and Markets, the global industrial hemp market is projected to grow from USD 4.6 billion in 2019 to USD 26.6 billion by 2025, posting a compound annual growth rate of 34%.

The U.S. farm bill represented an inflection point. The legalization of the cultivation of industrial hemp is a boon for major agricultural companies but also for the smaller entrepreneurial outfits that are devising new uses for hemp. These research and development efforts are leveraging hemp seed and hemp seed oil for applicability in a wide range of industries.

Hemp fiber is used in the textile and paper industries, due to its long and strong fibers compared to cotton. As a renewable material, hemp demonstrates applicability in energy production, clothing, construction, paint, insulation, animal feed, agriculture, furniture, automobile manufacturing… you name it.

Hemp also is a source material for biofuels and bioplastics, two areas of growing demand. Big Pharma, as well as smaller biotechs, are applying hemp for the creation of new medicines to treat chronic diseases that have proven resistant to conventional therapies.

An increasing number of these small-cap technology innovators in the hemp industry are going public, offering early investors a chance for outsized gains.

I’ll be keeping an eye on hemp’s emergence as an investment opportunity. You won’t hear anyone on financial television discuss hemp, but that’s a good thing. Shrewd contrarians know that the best time to strike is before the rest of the investment herd catches on.