Snap quiz. Identify the government official who made the following statement:

“Our assessment is for slower growth, but positive growth, going into next year.”

Bernanke said the U.S. economy didn’t seem headed for recession, but warned growth could unexpectedly weaken and inflation move higher. In 2007, the Fed cut rates in September, stocks topped in October, and the Great Recession started in December.

“We’re not forecasting or expecting a recession. The most likely outlook is still moderate growth, a strong labor market and inflation continuing to move back up.”

Back in the fateful autumn of 2007, economic and earnings growth were slowing, the yield curve inversion reared its head, the Fed was cutting rates, and stocks were trading at all-time highs. Through it all, the chair of the U.S. central bank was offering assurances that a recession was not on the horizon.

In other words, the backdrop was uncannily similar to the one we’re witnessing now.

We know what happened in 2008: the global financial meltdown, followed by the worst economic downturn since the Great Depression.

Do we now face the same fate? Not necessarily. But it tells us at least one thing: the pronouncements of Fed chairs often don’t count for much. For better guidance about the future direction of the stock market, let’s look at the earnings picture.

The earnings recession is here…

The first two quarters of 2019 posted negative year-over-year growth in corporate earnings. The third and fourth quarters are heading in the same direction.

For the fourth quarter, projections for earnings growth have been declining for several months (see chart). 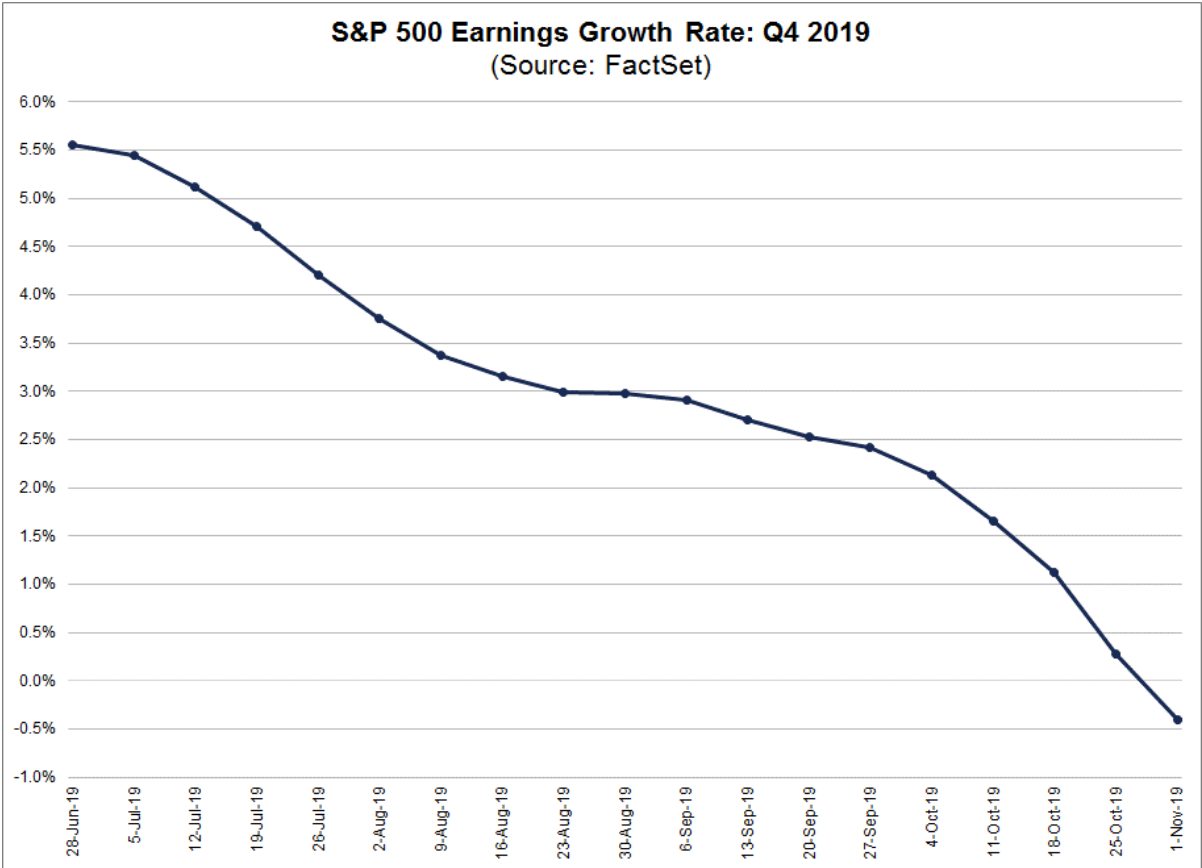 Five of the 11 sectors are now projected to report a year-over-year decrease in earnings for the fourth quarter, led by the energy (-29.7%) and consumer discretionary (-10.3%) sectors.

If the index reports a year-over-year decline in earnings in both the third quarter and the fourth quarter, it will mark the first time the index will have reported four consecutive quarters of year-over-year earnings declines since Q3 2015 through Q2 2016.

The culprits for declining earnings growth are a slowing global economy and headwinds from the Sino-American trade war.

After soaring Monday on trade optimism, stocks wavered Tuesday and closed mixed in choppy trading. The Dow Jones Industrial Average and NASDAQ both notched new record highs but the S&P 500 ended in the red. The rally was kept in check by fresh doubts about a trade deal.

China started pushing back on trade yesterday, making demands that certain tariffs get rescinded. President Trump is unlikely to cave.

Speaking at a Chinese trade show Monday, President Xi Jinping vaguely promised moves to open Chinese markets to foreign investors, but offered no new initiatives to alleviate trade tensions. Even if some sort of trade deal is signed by Trump and Xi, it wouldn’t undo the damage that tariffs have already caused to corporate revenues, profits and confidence.

On Wednesday morning, all three main U.S. stock indices opened in the red, as doubts emerged about a trade truce.

In a note to clients Tuesday, economists at the investment bank UBS Group (NYSE: UBS) warned that negative earnings growth could trigger a correction. They warned that the year-over-year growth rate for S&P 500 forward earnings has fallen to less than 1%, from 23% about 14 months ago.

According to the UBS report:

“Declines in S&P 500 forward earnings are uncommon and rarely good for equities. The index typically tops out just as earnings start to decline.”

The utilities and real estate sectors are poised to buck the negative earnings trend and post healthy year-over-year earnings growth in Q4. Take a look at the chart: 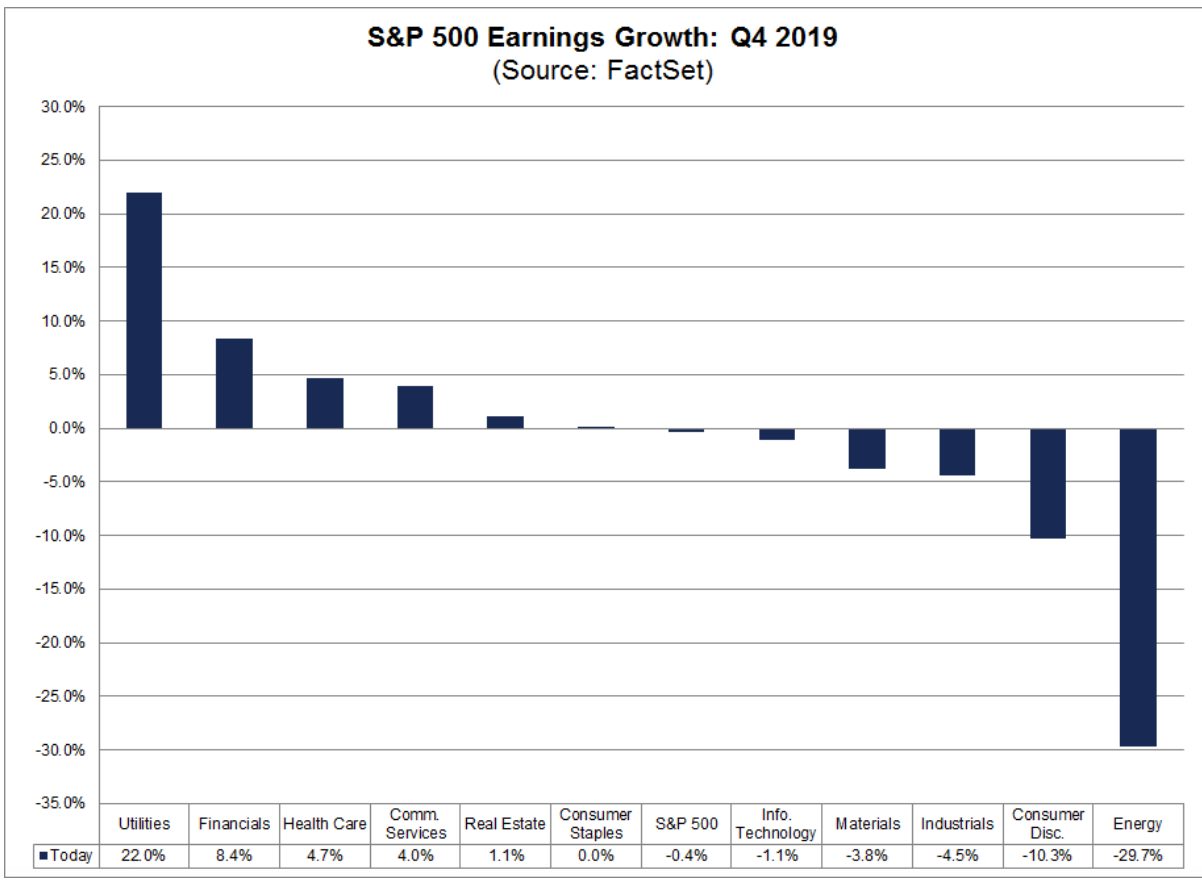 Utilities and real estate are expected to post solid profits for Q3 as well.

The decade-long era of ultra-low interest rates has been beneficial for dividend-paying stocks such as utilities. Not only can utility stocks offer payouts greater than the yield on 10-year Treasuries, but they’ve also racked up spectacular share price appreciation so far this year.

Another well-positioned sector is real estate. Both sectors tend to perform well during the late phase of economic expansion, which we’re in now.

Robust earnings growth in 2018 was a major factor keeping the bull market alive (despite a nasty tumble in December of that year). The 2017 U.S. tax cut fueled stock market gains as companies used their tax windfalls to launch share buyback programs.

What the tax cut has not done is stimulate business investment and economic growth, as its backers claimed it would. Instead, it produced a “sugar high” that’s wearing off. The tax cut also generated a massive federal budget deficit that will come back to haunt investors in the form of higher interest rates.

I’m not necessarily saying that another 2008-type crash is imminent. Maybe the next market downturn will be relatively mild, and maybe it will be postponed for a few more months. Even with Wall Street’s recent volatility, the major indices currently hover at record highs. If you get too bearish in your investment decisions, you’ll leave money on the table.

However, prudent investors should get ready now in the late cycle, before it’s too late. Elevate your portfolio’s cash levels and increase your exposure to “defensive” sectors such as utilities and real estate.

Utilities stocks have gotten a bit pricey, but you can still find reasonably priced gems. For the best plays in the utilities sector, click here for our “dividend map” of high yielders.

Final note: Remember leveraged synthetic collateralized debt obligations, aka CDOs? They were the villains of the 2007-2008 financial crisis.

CDOs are securities that hold different types of debt, such as corporate bonds and mortgage-backed securities, which are then sliced into varying levels of risk and sold to investors. In the run-up to the last crisis, they were billed as safe. Instead, they blew up and worsened the financial contagion.

Well, CDOs are coming back into vogue, as major investment banks such as JPMorgan Chase (NYSE: JPM) and Deutsche Bank (NYSE: DB) start offering them again. At the same time, regulations that were put in place to prevent the abuses and imbalances that created the last crisis are quickly getting dismantled. I’m reminded of the lyrics to one of my favorite songs, by Steely Dan: “You go back, Jack, do it again.”

Stay in the stock market. But stay cautious.