The Inside Scoop on NextCure’s Sudden Rise

There is one surefire way to know that inside information has leaked out on Wall Street. To illustrate, consider the recent trading activity in cancer immunotherapy developer NextCure (NSDQ: NXTC).

Until a few days ago, NextCure was just another small biopharma stock burning through a lot of cash. The company’s most recent press release was an announcement last month regarding the appointment of its new Chief Operating Officer. Nothing exciting there.

On November 4, NXTC closed at $26.42 on volume of 111,800 shares. The stock had been sliding down over the past two months on low volume, seemingly of no interest to anyone. However, the following day NXTC took off like a rocket. It traded up to $109 as nearly 8 million shares changed hands. 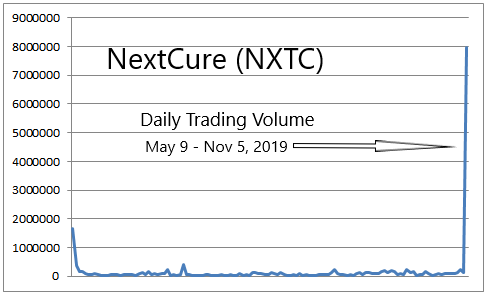 You might think NextCure made some sort of momentous announcement regarding one of the company’s experimental cancer treatments. Nope.

Or you might assume that the company released Q3 results that blew away analysts’ estimates. No, that didn’t happen either. That isn’t scheduled until after the market close on November 11.

That being case, what else might explain why the stock increased more than fourfold in value in a single day? Clearly, someone wanted to load up on NXTC fast and was willing to pay a lot of money to do it.

The buyer could have chosen to spread those orders over several days to lessen the imbalance between supply and demand for the stock. That probably would have kept NextCure’s share price from going through the roof, and save the buyer millions of dollars.

Whoever is behind all the buying this week clearly wanted to own the stock right away, and was willing to pay just about any price to get it.

The question begs, why?

The answer to that question may be found in a seemingly innocuous press release that NextCure issued on October 1:

“NextCure, Inc. (Nasdaq: NXTC), a clinical-stage biopharmaceutical company committed to discovering and developing novel, first-in-class immunomedicines to treat cancer and other immune-related diseases, today announced that clinical data from the Phase 1 portion of its ongoing Phase 1/2 clinical trial of NC318 in patients with advanced or metastatic solid tumors will be presented in an oral session at the 34th Annual Meeting of the Society for Immunotherapy of Cancer (SITC) being held November 6-10, 2019 in National Harbor, Maryland.”

It just so happens that the date the conference begins, November 6, is the day after someone bought a boatload of NXTC stock. It appears the company may have very good news to share regarding the NC318 trial and word leaked out.

If the company does make a pivotal announcement during the conference, you can bet the U.S. Securities and Exchange Commission (SEC) will want to know who bought all that stock last week, and why.

If that happens, I don’t envy that person one bit. My father spent most of his career as a prosecuting attorney in the enforcement division of the SEC and he relished moments like this.

It is highly unlikely that someone would risk that much money on only a hunch that the company might report stellar news. If nothing happens and the stock reverts to its level just one week ago, that investor stands to lose a fortune.

My guess is the unknown buyer resides overseas outside the jurisdiction of the SEC. And if he (or she) is smart, they executed the trades through an offshore bank that will mask their identity.

Even if the SEC is unable to identify the buyer now, one day that person will presumably want to sell that stock. When that happens, their identity may be harder to conceal.

That’s because about 80% of NextCure’s publicly traded stock is held by institutional investors. Every trade they make is reportable to the SEC and easy to track.

The other 20% is owned mostly by thousands of individual investors, each owning a tiny percentage of NXTC stock. When one of them eventually gives their broker a sell order for a few million shares of NextCure, someone is bound to notice.

That being the case, whoever made this trade may already be in a no-win situation. If the trade was made on a hunch that turns out wrong, the stock will most likely fall precipitously in which case they will lose a lot of money.

If that trade was made on inside information that turns out to be correct, it may only be a matter of time until they find themselves sitting across a courtroom from someone like my father.

Not only will they have to disgorge any profit made on the trade, but they will most likely spend time in prison. If they’re lucky, they may be able to negotiate a settlement with the SEC that avoids jail time in exchange for surrendering their stock along with a hefty fine.

When that’s the best-case scenario for a situation, you know you’re in trouble. Whoever made this NextCure trade may one day live to regret it.

Successful investors know that you don’t need to break the law to beat the market. You just need to know where the smart money is heading.

That’s where my colleague Amber Hestla comes in. If anyone has an instinct for the smart money’s direction, it’s Amber.

We’re so confident about this publication, we’re making you a bold promise: if you don’t get 52 “turbo” pot trades from Precision Pot Trader in the next year, which averages out to a triple or quadruple-digit profit opportunity once a week, let us know and we’ll give you another year of the publication, on the house.

Want to reap market-crushing gains in marijuana, the hottest industry around? Well, you don’t have to break the law to make a fortune in cannabis. Click here for all the details.