Seeds of Wealth: Why Agriculture Is a Smart Bet

I have diverse reading habits. When I’m not reading books on finance, you’ll find me seeking wisdom in, say, Eastern philosophy. In fact, a touch of Zen can come in handy, when making investment decisions.

The ancient Chinese poet and philosopher Lao Tzu, one of my favorite thinkers, wrote: “To see things in the seed, that is genius.”

The metaphor is apt for the agricultural sector, which stands out right now as an effective “defensive growth” hedge.

The broader stock market has rallied this week. If you’ve been making big profits from this long bull run, congratulations! Give yourself a pat on the back.

Now ask yourself: are you prepared for the inevitable downturn?

No bull market lasts forever. Valuations are high but earnings growth is contracting. That’s a recipe for a stock market correction. We’re also witnessing the late-stage of the economic expansion.

You can protect your portfolio by rotating toward plays that confer the opportunity for growth but also serve as a hedge against tough times.

These sectors include not just agriculture but also utilities, real estate, consumer staples, and health services. Among the publications that I edit is our premium trading service Utility Forecaster. Accordingly, I’ve given ample coverage to the appeal of utilities stocks under current market conditions.

Utility stocks have risen dramatically in price so far this year, but you can still find bargains if you know where to look. For our “dividend map” of reasonably priced dividend-payers in the utility industry, click here.

Another well-positioned sector now is agriculture, which I haven’t covered in depth lately. Fact is, the financial press tends to ignore agriculture. After all, it’s not as sexy as the high-tech story stocks that the carnival barkers on CNBC like to prattle on about. But agriculture has the properties of an inflation hedge and a late-cycle investment because of the industry’s projected robust and stable growth for decades to come.

In today’s uncertain conditions, providers of “essential services” are good bets for investors. And everybody needs food.

According to a recent United Nations report, the world must increase food production to meet demand by 50% by the year 2030, and by 80% by the year 2050. So yeah, the long-term demand is there.

Major news developments have emerged this week in agriculture, prompting me to turn a spotlight today on the sector.

China promises to pony up…

This week, officials in Washington and Beijing have asserted that a pending trade deal between the U.S. and China reportedly includes promises from China to make huge purchases of agricultural products from American farmers, who have greatly suffered from the trade war.

What’s more, a study released this week shows that China faces an acute protein shortage, which positions U.S. livestock and soybean producers for a surge in demand.

These are just the latest indications that it’s time to increase exposure in your portfolio to agriculture.

One time-proven strategy to build wealth is to tap into a trend with sustainable momentum that will unfold regardless of financial and economic ups and downs. By investing in plays that benefit from sweeping global transformations, you can settle in for the long haul and tune out the white noise.

As the following chart shows, the world will only get hungrier over time. 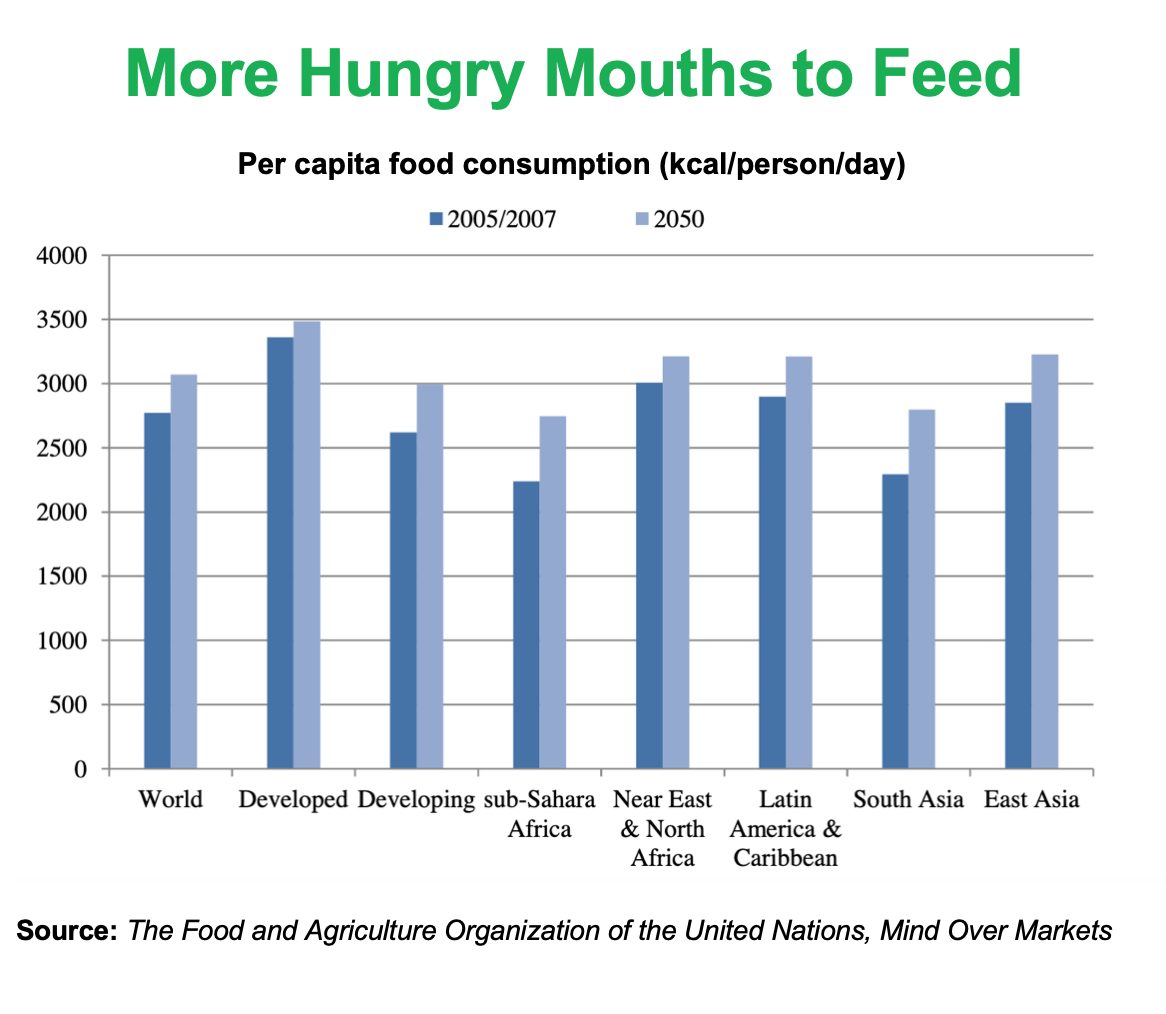 Agricultural assets face multiyear tailwinds, as the globe contends with a looming food crisis. According to a recent report from the research group Global Harvest Initiative, exploding demand for food, feed, and fiber will soon outpace agricultural output if demand and production levels remain the same.

Climate change poses a particular threat to agriculture, as farmers try to get greater yields from less and less arable land, to feed ever-growing populations.

According to a recent report from the National Oceanic and Atmospheric Administration reports, in 2019 (as of October 8) there have been 10 weather and climate disaster events with losses exceeding $1 billion each across the U.S,

Whether the culprit for the rising incidence of ferocious storms is climate change or something else, violently erratic weather is a new global reality that the public and private sectors are scrambling to mitigate. The most devastating effect is on agriculture.

The journal Nature reports that droughts, floods, extreme temperatures, and hurricanes have destroyed about a tenth of the globe’s wheat, corn, and other cereal crops over the last five decades.

A separate report from Nature found that the world’s stores of groundwater, which accumulates over millennia in aquifers, are vanishing at an “alarming” rate, putting further pressure on agriculture and making viable producers of food all the more valuable.

What’s more, a recent report in Science magazine estimates that the world population is unlikely to stop growing this century. Based on United Nations data, the magazine states there is an 80% probability that world population, now 7.2 billion people, will increase to between 9.6 billion and 12.3 billion in 2100.

The upshot: societies around the world will have a lot of mouths to feed.

Another tailwind for the agricultural sector is the rising affluence in emerging markets, especially in Asia and South America, which in turn is creating greater numbers of hungry middle-class consumers.

According to the Brookings Institution: “We are witnessing the most rapid expansion of the middle class, at a global level, that the world has ever seen… Within a few years, based on current forecasts, a majority of the world’s population could have middle-class or rich lifestyles for the first time ever.”

Countries such as South Korea, India, Taiwan, Indonesia, and the Philippines are showing an insatiable appetite for grain, as rising middle classes in those regions pocket more disposable income and embrace a Western diet that’s heavy on meat and processed convenience foods.

This year, pressure on commodity prices and uncertain growth in emerging markets have weighed on agricultural funds and equities, making them reasonably priced now. These investments should rise in 2020 and beyond as commodity prices recover and socio-political forces (combined with environmental anomalies) create greater food shortages.

Commodities in general represent fast-moving investments, and as such deliver the potential for market-beating gains. The agricultural sector in particular serves as a classic inflation hedge. Although inflation still appears relatively tame, signs are emerging that it’s gaining momentum, which compels proactive measures to protect your portfolio.

Agricultural commodity equities and ETFs are a hedge against inflation because food prices often head higher first. These investments are currently out of favor and in my view undervalued, but long-term investors should expect a reversion to the mean.

The time to buy inflation hedges is when they’re still cheap, not when their prices are getting bid higher because inflation has become more obvious. Remember my mantra: bet against the herd.

Questions or comments about sector rotation? We welcome your letters: mailbag@investingdaily.com