Coping With The Cannabis Cash Crunch

The bloom is off the marijuana flower. It was bound to happen. But I assure you, the buzzkill is only temporary.

The latest challenge: an industry-wide cash crunch. The recent correction in marijuana sector stocks is impeding the ability of many pot companies to raise capital, exactly at a time when they need it the most.

The cash crunch underscores the need for investors to be selective. Scarcity of new capital favors companies that are already well-funded. The overall correction in pot stocks also puts certain intrinsically valuable companies onto the bargain shelf. Below, I’ll explain how to pinpoint the ultimate winners during this perilous time for the industry.

The level of capital getting raised by marijuana companies has plunged in tandem with the decline in market values. As struggling marijuana companies seek loans, they’re getting saddled with onerous terms. At the same time, raising cash by issuing new shares at low valuations is unappetizing for management.

Traditional sources of capital are drying up, as bankers get spooked by the recent plunge in marijuana stocks. Balance sheets are deteriorating throughout the industry, making it difficult for pot companies to consummate expansion or merger plans. Many ambitious strategic plans touted with hyperbolic rhetoric on marijuana company websites have gone up in a blue haze. It reminds me of the dot.com bust of the late 1990s, although not as severe.

Banks are hesitant to lend to marijuana companies, because pot remains illegal at the federal level in the U.S. Bankers are worried about unforeseen liabilities. Lenders are by nature conservative and they fear a potential legal backlash against pot. The correction in share prices has exacerbated this caution.

This grim reality underscores the industry’s need for legislation to bring marijuana into the financial mainstream. Some lawmakers are heeding the call.

The House of Representatives in late September advanced a bill that would protect banks that service the cannabis industry from being penalized by federal regulators. Called the Secure And Fair Enforcement (SAFE) Banking Act, the legislation seeks to expedite the provision of financial services to cannabis companies by removing the fear of potential federal action against lenders.

The SAFE bill is now in the Senate, where the odds of passage look good. President Trump hasn’t indicated whether he would sign the legislation, but he has other things on his mind right now, as televised impeachment hearings proceed this week in Congress. When the dust settles on Capitol Hill, politicians will get back to the job of legislating and the SAFE bill is almost certain to move to the forefront.

It’s my view that governments around the world will continue to boost the marijuana industry, through decriminalization and by making it easier for pot companies to get loans. Why? In the words of Deep Throat in the 1976 movie All the President’s Men: “Follow the money.”

Marijuana taxes are an abundant source of existing and potential revenue for governments. Politicos can’t resist all that money. “Sin” taxes are a politically palatable way for cash-strapped governments to fund operations, without raising, say, property or income taxes (see chart). 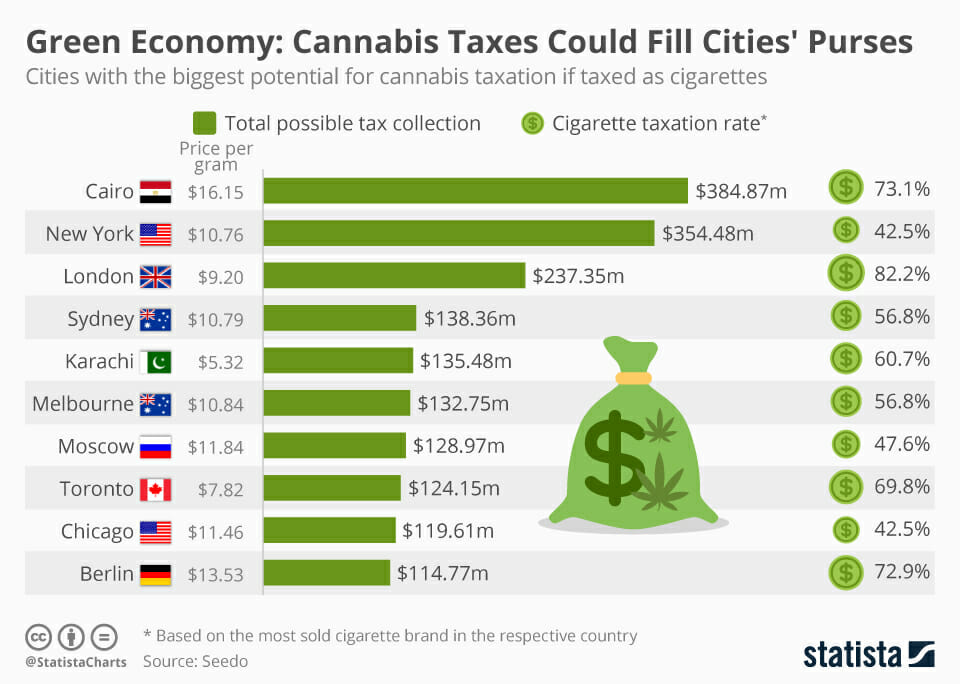 Marijuana creates jobs and fills the coffers of federal, state and local treasuries. Out of self-interest, lawmakers will make sure that bankers come around. No one wants to derail the revenue gravy train, especially in this era of gigantic federal deficits.

The White House occasionally spouts anti-pot language, to appease its socially conservative base. But there’s no stemming the tide of legalization. At the end of the day, the Trump administration is pro-business. Marijuana companies will eventually overcome the current cash crunch and get back to the business of minting new millionaires.

The sudden paucity of funding especially hurts marijuana biotechs. A growing number of micro-cap, cannabinoid drug companies are running out of cash. Many of these biotechs are clinical-stage companies, with no drugs getting prescribed.

Consequently, their future prospects depend on how clinical trials turn out. If their drugs make it through the regulatory gauntlet, these firms hit the jackpot and enrich early investors. If their drugs fail in trials, they’re dead in the water. It takes millions of dollars for a drug to get approved by the FDA. Most fledgling companies either run out of cash or see their drug candidates crash and burn.

When investing in the biotech sector, go with companies that have at least one drug on the market that’s making money. Investing in clinical-stage pharma stocks is akin to gambling in Las Vegas. It’s exciting, but the odds are against you. The risks are even greater when marijuana-based therapies are involved.

Whether in the recreational or medicinal arena, many struggling pot companies have purposely positioned themselves as takeover targets. Deep-pocketed blue-chip companies, in consumer foods and beverages, tobacco or pharmaceuticals, are eager to acquire marijuana firms. The Big Boys want a piece of the marijuana action. But for many marijuana small fry, takeover hopes are unrealistic because they don’t have enough to offer.

A source of financial strength for small, cash-starved marijuana companies is partnership with larger, established companies that boast national or global infrastructures. The ability to piggy-back branded recreational marijuana products onto a consumer company’s existing supply network, or the ability to receive milestone payments and/or royalties from Big Pharma, can mean the difference between profitability and red ink, between survival and extinction.

The caffeine of the 21st century…

Marijuana penny stocks have been the worst victims in recent months of declining stock prices and the drying up of capital in the sector.

Penny stocks. Those two words can strike fear, or greed, in the hearts of investors.

There are two sides to the penny stock coin. One side entails market-crushing gains, instant wealth, and 20-something millionaires flaunting their yachts and Maseratis. The other side? Fraud, pump-and-dump schemes, broken promises, bankrupt companies, and massive losses.

Will the entire marijuana industry implode? Absolutely not. The marijuana boom represents one of the greatest investment opportunities that you’ll ever see in your lifetime. The global trend toward marijuana legalization is unstoppable.

Public opinion has grown far more tolerant toward pot. Now that they’re senior citizens, baby boomers are using pot not so much to get high, as to treat their various aches and pains. The Summer of Love has given way to the suffering of arthritis. For younger consumers, marijuana is the caffeine of the 21st century.

However, as with any industry, you must stick to the fundamentals. Look beneath the razzle-dazzle and study the financial statements. The words “cannabis” or “marijuana” in a company’s title don’t guarantee success.

When looking to buy pot stocks, scrutinize company balance sheets. Make sure there’s reasonable cash flow to cover operating expenses. Too many investors are jumping aboard the marijuana bandwagon without first examining the financial fundamentals. The cash crunch can be a real downer, but only for companies that are inherently weak.

John Persinos is the editor-in-chief of Marijuana Investing Daily. Questions or comments? Drop him a line: mailbag@investingdaily.com