How to Profit on the “Comeback Kids”

Regardless of sector, from consumer discretionary to industrials to even marijuana, situations periodically arise whereby inherently valuable stocks take a brutal pounding. That’s when value-conscious contrarians should strike. Below, I’ll show you some of my favorite ways to capitalize on bargains that are poised for a comeback.

Let’s start with WW International (NSDQ: WW). Three months ago, I identified WW as an undervalued stock on the move. The company formerly known as Weight Watchers had recently changed its name and expanded its product line to appeal to a wider range of customers.

It looks like that plan is working. On November 5, WW released strong Q3 results and raised its earnings guidance for 2019. Over the next two weeks, WW climbed 20% to reach its highest price since January and is up 32% since I wrote about it on August 12. 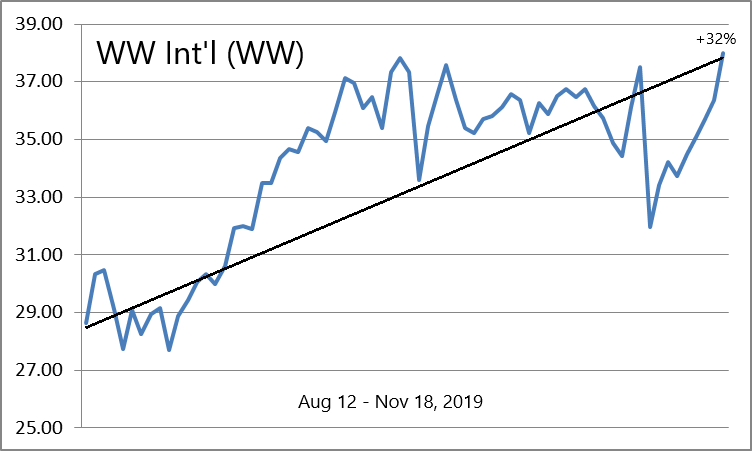 Of course, I love it when a stock performs exactly the way I think it will. Especially in cases like this, when just about everyone else on Wall Street was looking the other way.

The herd mentality that dominates most stock market trading can be a dangerous thing. It’s wonderful when you own a stock that is benefiting from other investors’ newfound affection.

But it can be frustrating when a stock you know is fundamentally undervalued doesn’t get the respect it deserves. In those cases, you have to ask yourself how much longer you are willing to wait before cutting your losses and moving on.

That’s where I am right now with a handful of stocks I own, including International Business Machines (NYSE: IBM). I believe its strategy to transition to more of a cloud-based revenue stream will work, but it’s taking longer than I expected.

At times, I’ve been tempted to sell IBM and be done with it. However, I abhor the idea of taking a loss on a stock that I believe could break out to the upside any day.

One reason I haven’t sold IBM is that it pays a healthy dividend that I can reinvest elsewhere. In fact, I recently showed you how I used some of that cash to score a quick 90% profit on call options on IBM.

As I explained in that same article, I also bought call options on General Electric (NSYE: GE) a year ago. At the time, I felt GE had become oversold and was likely to rebound quickly.

The bad news is my timing was early. After buying those options, GE’s share price fell even further as the overall stock market went in the tank last December.

The good news is I bought a long-term call option, or “LEAP,” that does not expire until January 2021. There is still plenty of time for GE to turn around. Similar to IBM, I feel GE is a stock that is fundamentally undervalued.

Read This Story: Boosting Returns By LEAPS and Bounds

When I wrote that article two months ago, GE closed near $9. That meant I was still “out of the money” on my options trade since it has a strike price of $10.

Since then, my faith in General Electric has been vindicated. After releasing stronger than expected quarterly results three weeks ago, GE’s share price has raced above $11. In less than a month, my option trade went from being at a 22% loss to a 17% gain!

I also hold similar call options on Ford Motor (NYSE: F), Texas Instruments (NSDQ: TXN), and Western Digital (NSDQ: WDC). At the moment, I am showing a small loss on each of those trades. But as with General Electric and IBM, I believe it is only a matter of time until they become profitable.

The Next Big Profit Opportunity

Admittedly, my approach to capitalizing on undervalued companies is not for the faint of heart. If I turn out to be wrong about a stock, my call options could end up being worthless.

That’s why I wait until a stock has taken a beating before I make my move. That way, even if I am a bit early in my timing (as I was with GE), I don’t have to wait too long to get the rebound I am expecting.

For that reason, I always keep a shortlist of companies (and sectors) that appear oversold and on the verge of recovery. That’s how I feel now about the medical marijuana industry, which has undergone a correction.

Read This Story: Coping With the Cannabis Cash Crunch

To be sure, most “pot stocks” were overvalued in 2018 when Canada became the first industrialized nation to legalize the recreational use of marijuana. But since then, many of them have fallen to bargain-basement prices despite positive growth trends here and abroad.

There are several ways you could profit from this opportunity. Of course, you could simply buy a few stocks that you feel are most likely to become industry leaders. Or you could invest in an exchange-traded fund (ETF) that provides broad diversification across the entire sector.

For my money, the biggest profit opportunities stem from buying call options on those marijuana stocks that appear the most undervalued and likely to rebound soon. If I turn out to be right, the potential pot sector gains could be far greater than what I’ve made on stocks such as IBM and General Electric.

Unfortunately, I’m not an expert when it comes to the legal marijuana business. But we have analysts on staff who closely study marijuana trends. These marijuana specialists are brilliant at pinpointing the best pot plays now. Marijuana stocks have swooned lately, but our experts remain convinced that the sector is on the verge of a big comeback.

Want to find the most compelling value plays in marijuana? Click here for our special report.