America is fighting a trade war with China and the rest of the world that resembles trench warfare. The conflict drags on despite repeated truce attempts, with no end in sight. The pointless ruin affects all sides, with no apparent winner.

This comparison occurred to me yesterday, during an important historical milestone. The Battle of the Somme ended November 18, 1916, after 140 days. The World War I battle, fought in the trenches, claimed one million dead and wounded among the Allies and Germans. There was no clear victor.

But for the current trade war, I bring good news from the front.

A study released November 18 by the research firm FactSet is encouraging. FactSet searched for the term “tariff” in the conference call transcripts of 451 S&P 500 companies that had conducted earnings conference calls between September 15 and November 14.

The trade war hasn’t ended and it’s still negatively affecting global growth, corporate results, and consumer pocketbooks. However, based on the latest evidence, it seems that companies are successfully adjusting operations to better cope with tariffs.

Companies affected by trade sanctions are increasingly altering supply and distribution chains, finding alternate sources of valuable inputs, and incorporating tariffs in strategic planning. As I wrote on Monday, trade tensions are becoming “the new normal.”

Read This Story: How to Ride The Bull…Without Falling Off

In another positive and perhaps related development, earnings growth in the third quarter of 2019 has come in better-than-expected, with plenty of “beats” on both the top and bottom lines.

To date, about 92% of S&P 500 companies have reported actual results for the third quarter. In terms of earnings per share (EPS), the percentage of companies reporting actual EPS above estimates is 75%. As a whole, companies are reporting earnings that are 3.9% above the estimates.

The blended EPS earnings decline for the third quarter is -2.3%. If -2.3% turns out to be the actual decline for the quarter, it will represent the first time the index has reported three consecutive quarters of year-over-year declines in earnings since Q4 2015 through Q2 2016. It also will mark the largest year-over-year decline in earnings reported by the index since Q2 2016, when profits came in at -3.2%. 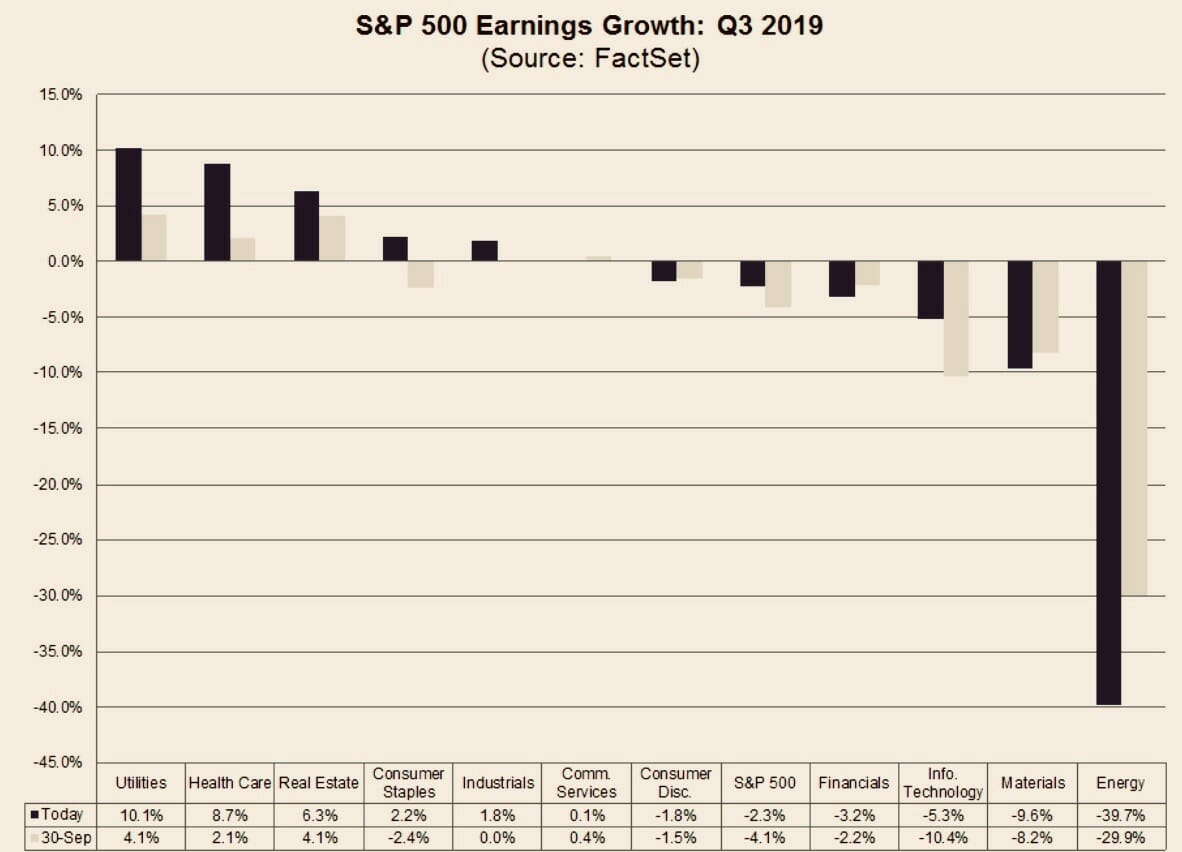 Analysts don’t expect positive earnings growth for the fourth quarter. Even though Q3 generally beat expectations, we’re still looking at a negative growth trend for earnings. And although companies are learning to cope with tariffs, these weapons of trade warfare still pack a punch.

Will the Federal Reserve come to the rescue with some stimulus, when it meets in December? For clues, investors will be closely watching the minutes from the Federal Reserve Open Market Committee’s latest policy meeting, when the U.S. central bank reduced interest rates for the third time this year. The FOMC’s minutes are scheduled for release tomorrow.

In this good news/bad news environment, I recommend increasing you exposure to dividend-paying stocks. These equities exhibit superior investment qualities for at least four reasons:

1. Regular income. With investments that don’t pay dividends, investors only realize profits when they sell. Dividend-paying stocks pay out cash in regular installments that can be reinvested, saved, or spent.

2. Higher earnings growth. According to the findings of research group Research Affiliates, many companies that don’t pay dividends misallocate capital towards projects that don’t benefit shareholders. Requiring company executives to pay out cash dividends to shareholders imposes discipline on their management decisions and compels them to only invest in the highest-return projects.

3. Higher earnings quality. Typically, companies only pay dividends if they believe that they are financially healthy enough. This results in a “natural selection” whereby companies with strong and stable earnings streams decide to pay dividends.

4. Easier to value. Because it is much easier to value a company based on future dividend payments than on predicted future earnings, dividend-paying stocks tend to be less volatile than non-dividend paying companies.

Dividend yields can vary greatly from company to company, based on the market’s perception of the company’s riskiness and growth prospects.

As always, investors must be mindful of the trade-off between risk and reward. If a company suddenly can’t generate enough cash flow to support its dividend, it may cut the dividend or get rid of it altogether.

When judging the merits of a dividend stock, always look for healthy payout ratios, plenty of cash on hand, and earnings growth. These quality dividend payers demonstrate greater resilience when overall corporate earnings growth and stock valuations show a disconnect, as they do now.

A particularly appealing sector at this point is consumer staples (see the earnings growth chart above). These are the companies that make laundry detergent, toothpaste, razor blades, dish soap, paper towels, cough drops…you name it.

Not exactly sexy stuff. But here’s the thing about consumer staples companies: in good years they perform well and in bad years they’re typically stable. It’s a Warren Buffett truism: invest in companies that provide products and services that people actually need.

The same can be said of utilities, which are traditional safe havens that provide essential services and pay high dividends. For a “dividend map” to the best high-yielding utilities stocks, click here now.

In a shooting war or a trade war, the most adaptable will survive. Calibrate your portfolio now, for long-term survival.

John Persinos is the managing editor of Investing Daily. Send your comments or questions to: mailbag@investingdaily.com