Your Investment Guide to The Marijuana Small Fry

Do you need more evidence that marijuana is permanently in the mainstream? Look no further than the latest Democratic presidential debate.

“I heard him literally say ‘I don’t think we should legalize marijuana,’” Booker said of Biden. “I thought you might have been high when you said it.”

I laughed out loud when I heard a United States Senator facetiously accuse an ex-VP of smoking dope…in front of millions of TV viewers. It drove home for me how times have changed since the bygone days of “Just Say No.”

Fact is, since the Democrats took control of the U.S. Congress in the 2018 midterm elections, we’re witnessing the most marijuana-friendly legislative environment in history.

Indeed, cannabis stocks rallied across the board Thursday, in the wake of a historic vote in the U.S. House in favor of legislation that would lift the federal ban on marijuana. Several larger-cap marijuana stocks rallied by more than 10%.

The bill, introduced by House Judiciary Committee Chairman Jerrold Nadler (D-NY), passed Wednesday by a 24-10 vote in favor. The bill includes provisions to expunge past criminal records for marijuana violations and would implement a 5% cannabis sales tax.

The House vote was just a first step toward a complete lifting of the federal ban, but it was symbolically important and cheered pot investors who have been down in the dumps lately.

As for Joe Biden, he’s been staking out a position on marijuana that’s to the right of the other Democratic presidential contenders. Biden is a moderate who served in the Senate before Barack Obama chose him as his running mate. Biden is probably posturing on the issue of pot to appeal to the socially conservative voters he needs to form a winning coalition.

The marijuana industry has evolved into a multi-billion-dollar juggernaut and not even a President Biden could stop it. Corporate lobbying, growing state tax revenue, and robust public demand all ensure that marijuana legalization is here to stay.

That’s not to say there won’t be twists and turns along the way. 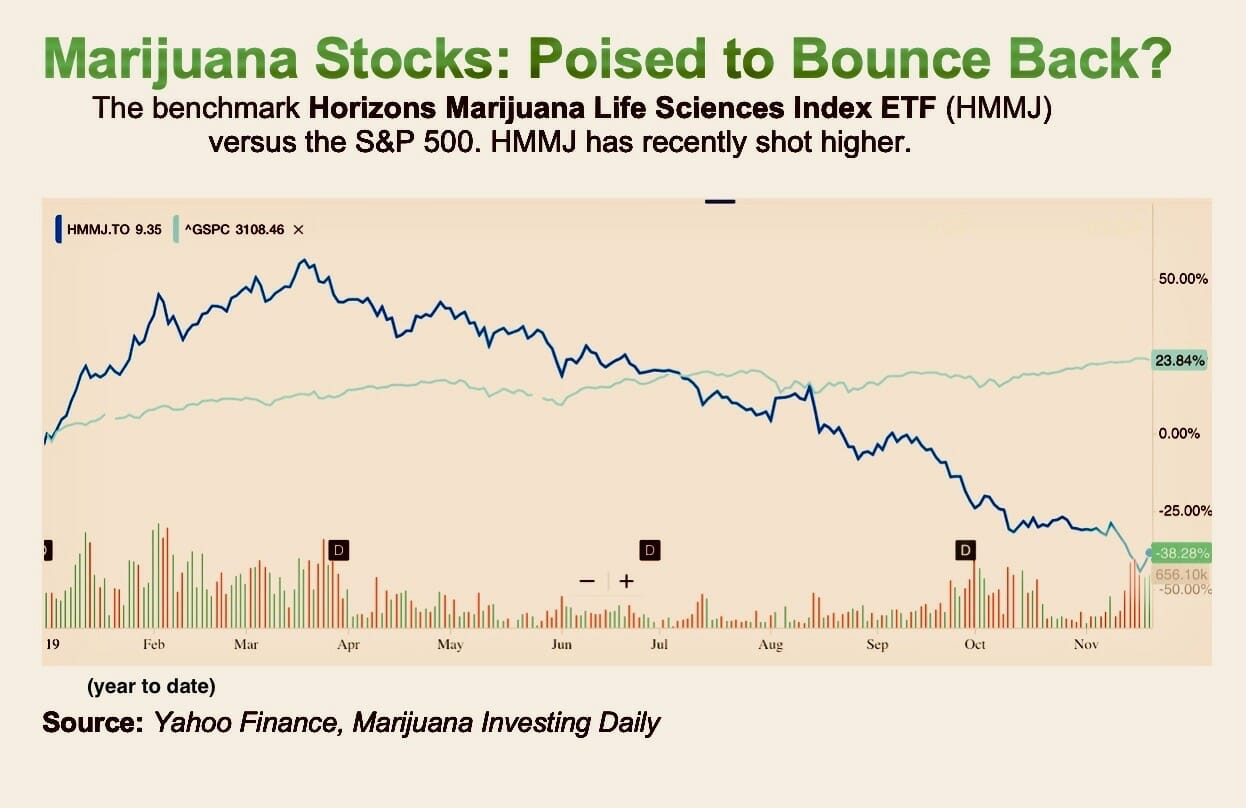 The marijuana sector has swooned lately, especially the penny stocks that dot the cannabis landscape. However, as the chart shows, the sector has shot higher in recent days, in the wake of encouraging operating results from major marijuana companies.

In this issue of Marijuana Investing Daily, I’ll focus on marijuana penny stocks, so you can determine whether they’re right for you.

The Ins and Outs of Penny Stocks

Penny stocks have popped up in the marijuana industry like mushrooms in the rain. Some of these penny stocks are future growth companies and they’re worth a look by aggressive investors. But most of them, sad to say, are toxic investments. In recent weeks, many of them have crashed and burned.

There are two sides to the penny stock coin.

Are penny stocks tiny, undervalued entrepreneurial “disruptors” poised for greatness and massive riches? Yep. Think Apple (NSDQ: AAPL), the proverbial garage start-up that was founded in 1976 and went on to become one of the biggest corporations on the planet.

Fact is, investing in penny stocks isn’t for everyone. If you’re risk averse, stay away. But if you can shoulder added risk and you’re eager to turbo-charge your portfolio, penny stocks might be for you.

What exactly is a penny stock, anyway?

A penny stock usually trades outside the main market exchanges at a relatively low price per share (often below a dollar, hence the name penny stock). It’s viewed as highly speculative because of small market capitalization, low liquidity, large bid-ask spreads, and limited following by analysts.

Penny stocks often (but don’t always) trade over-the-counter (OTC) through the OTC Bulletin Board and the pink sheets.

Pink sheets are daily publications compiled by the National Quotation Bureau with bid and ask prices of OTC stocks. Unlike companies on a major stock exchange such as the NYSE or NASDAQ, companies quoted on the pink sheets aren’t required to meet minimum exchange requirements or file with the SEC. Accordingly, these stocks are easier to manipulate and they’re often the center of pump-and-dump schemes. Buyer beware.

Sometimes you’ll witness a penny pot stock that spikes sharply higher (and then lower), depending on hype-filled headlines. When I see this phenomenon, I catch a powerful aroma and it’s not marijuana. I smell a possible pump-and-dump scheme.

Several companies engage in what is called stock promotion. These are usually penny stocks that have no coverage by any analyst or publication. In an effort to generate publicity and buying interest around the stock, the company will hire a stock promotion firm.

It is not illegal for a company to hire stock promotion firms. The SEC states, however, that if a company pays someone to publish or publicize articles about its stock, it must be disclosed to the investing public.

What Qualifies as a Top Penny Stock?

The company must have strong fundamentals and quality management. Look for a solid balance sheet, growing earnings and revenue, and a competitive edge against industry rivals. A common red flag is excessive debt, without sufficient revenue to cover liabilities.

Insider ownership is always a plus; it shows that management has “skin in the game,” which lessens the chance of financial gimmickry. The company’s niche should be rapidly expanding and its products and/or services distinctive.

Companies that are developing breakthrough marijuana technologies are particularly promising. These entrepreneurial firms are poised to transform the status quo, which means they’ll probably survive and thrive over the long haul. Marijuana biotechs with unconventional drug treatments in the pipeline could hit the jackpot. For all marijuana penny stocks, the key is to conduct due diligence.

Here’s the good news: We’ve already done the homework for you. Now’s a good time to consider marijuana value plays, before the market gets frothy again. For our team’s latest research on the best pot stocks, click here.

John Persinos is the editor-in-chief of Marijuana Investing Daily. Send your questions or comments to: mailbag@investingdaily.com