Target: The Retailer that Survived Amazon

Do you want to know what makes me really happy? Seeing a stock I own appear on a list of the stock market’s biggest gainers.

That’s what happened on November 20 after Target (NYSE: TGT) released Q3 results that stunned the market. The company also raised its earnings guidance for 2019. That day, TGT jumped nearly 15% to close at its highest price ever.

I can’t say I’m surprised that Target once again proved its naysayers wrong. In fact, I added Target to the Personal Finance Growth Portfolio in April 2017 because I believed that is exactly what the stock would do. Personal Finance is the flagship newsletter in the Investing Daily portfolio of publications. I serve as PF’s chief investment strategist.

I added TGT to the Growth Portfolio because in my view, the stock had become grossly oversold due to inflated fears over e-tailing giant Amazon.com (NSDQ: AMZN).

Two years ago, I identified Target as one of “3 Retailers that Will Survive Amazon” and bought all three stocks for my personal brokerage account. In addition to Target, I also felt Walgreens Boots Alliance (NSDQ: WBA) and Dick’s Sporting Goods (NYSE: DKS) would eventually thrive. 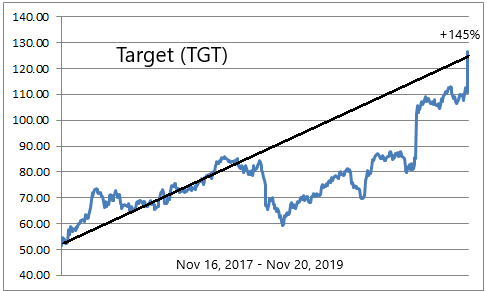 Since then, TGT has returned 145% while DKS is up 50%. My only mistake was WBA, down 9% but I still believe that stock will soon turn positive, too. As a group, this trio of stocks has generated an average return of 62% over the past two years while AMZN has gained 53%.

However, don’t misinterpret those results to think that the retail sector has not been adversely impacted by the rise of Amazon. The sector-specific SPDR S&P Retail ETF (XRT) is up only 10% over the past two years. That’s less than half the 26% gain of the broadly diversified SPDR S&P 500 ETF (SPY).

The point is, when a sector is under immense pressure, only the strongest will thrive while the weakest will crumble.

Take a look at the following list of last week’s daily winners and you’ll notice something else. Besides Target, a store best known for selling kitchen merchandise and inexpensive clothes, the other three biggest gainers that day were all “pot stocks,” a sector that has taken a beating lately. 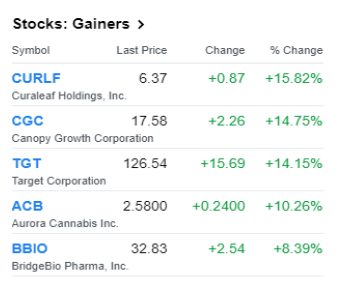 In this case, it is not the presence of a category killer like Amazon that has brought the sector down. Instead, the legal marijuana industry is going through its first major shakeout. Most of these companies went public long before they might ever become profitable and are now running out of money.

Read This Story: Coping With the Cannabis Cash Crunch

That’s what happened 20 years ago during the first phase of the Internet boom. Back then, dozens of “dot com” businesses collapsed as advertising revenue failed to live up to expectations.

The weaker companies were either acquired by bigger competitors or went out of business altogether. As a result, the stronger companies gained market share. Some of them have since grown into big businesses worth billions of dollars.

There’s nothing wrong with that. For better or worse, industry consolidation is an unavoidable consequence of free-market enterprise. And it doesn’t only happen once. As an industry matures, it will go through several consolidation phases until only a small number of competitors remain.

That’s what happened in the automobile manufacturing sector during the 20th century, and what appears to be happening in the retail sector now. Just as Ford (NYSE: F), General Motors (NYSE: GM), and Chrysler (NYSE: FCAU) came to dominate the automobile sector, perhaps Amazon, Target, and Walmart (NYSE: WMT) will be the only three American retailers left by the end of this century.

Even if that doesn’t happen, more consolidation in the retail sector is inevitable. As that occurs, there will be numerous opportunities for investors to cash in.

The Best of Both Worlds

As happy as I am with my profit in Target, I know I could have done a lot better. Recently, my colleague Scott Chan explained how using long-term call options, or “LEAPs,” can amplify your investment results.

The 145% gain I achieved over two years by owning Target stock could have been accomplished in a single week had I owned a call option on TGT. Actually, if I had bought a LEAP on Target a year ago, my return would be much greater than that.

Of course, as the old saying goes hindsight is 20/20. I could have just as easily lost money if Target had been unsuccessful in fending off Amazon.

For that reason, a prudent investment strategy would include a safety net that limits losses on unprofitable trades. I’m okay with owning an underperformer like Walgreens provided it doesn’t ruin the performance of my overall portfolio.

There are several ways to accomplish that, the simplest of which is using stop orders to sell you out of a stock if its price drops too low. That method works well if you are only trying to make money when the price of a stock goes up.

What you may not know is that there is a way to make money on a stock even if its price does not rise. Even better, you can limit the amount of risk you are taking to precisely whatever level is suitable to you.

Already, my colleague Jim Fink has booked gains of 66%, 36%, and 61% this year using such a method. In fact, Jim has closed 26 trades like that this year, every single one of them for a profit!

Our team has put together a presentation to explain how you can profit from paragon. Click here to watch.