The Bulls Face a Fork in the Road

In the words of the late, great baseball legend Yogi Berra: “When you come to a fork in the road, take it.”

New York Yankees Manager Berra was infamous for mangling the English language. But his aphorism is applicable to stocks right now. The bull market, which is more than 10 years old, could be facing an inflection point. Which direction should investors take, toward risk assets or safe havens? The answer is both. I’ll show you how.

Earnings growth is negative but valuations are high. The economic expansion continues but recessionary signs are emerging. Stocks hover at record highs, but investors are sitting on huge amounts of cash. With the start of 2020 looming on the calendar, investors truly face a fork in the road.

The three indices opened in the green Friday, on track to snapping their losing streak, as President Trump said a trade deal was close. Stocks wobbled as the day wore on, though, because investors remain jittery. Beijing yesterday warned Washington that a trade deal would be even less likely if Trump signs legislation supporting Hong Kong protestors.

The U.S. Senate passed a bill Tuesday condemning the crackdown and affirming support for Hong Kong. The House followed suit on Wednesday. Trump hasn’t indicated whether he’d sign the bill.

In economic news yesterday, the Philadelphia Fed Manufacturing index for current general activity rose by 4.8 points from the previous month to 10.4 in November 2019 (see chart). 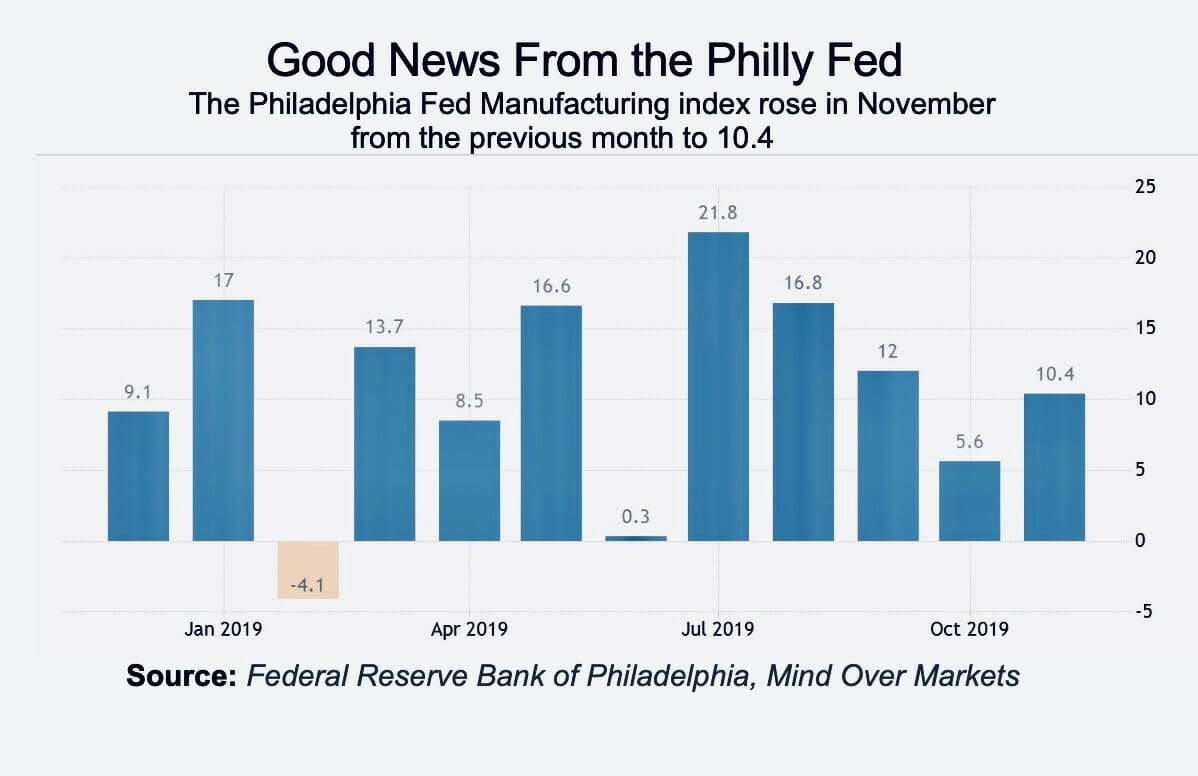 The latest Philly Fed reading surpassed consensus expectations of 7.0, but keep in mind, it’s still far below the 21.8 reading in July.

The U.S. Labor Department reported yesterday that the weekly number of new jobless claims exceeded estimates for the second consecutive week, coming in at 227,000. That’s the highest level since last June and another indication that the U.S. economy and hiring are slowing.

Now that third-quarter earnings season is essentially over, the numbers say that the S&P 500 reported a decline in earnings (-2.2%) for the third straight quarter, with 75% of companies exceeding estimates.

The prognosis for stocks, then, remains mixed. There’s another factor you need to consider: interest rates. Will investors enjoy low interest rates, forever and ever? Sorry. It just doesn’t work that way.

Most retail investors are fixated on the major stock market indices. But don’t lose sight of another benchmark: the yield on the 10-year U.S. Treasury note.

This yield is used to help set the cost of money for everything from mortgage rates to corporate borrowing. That makes its movement (the yield rises as Treasury prices fall) extremely important for dividend stocks, as well as the broader market.

Movement in the Treasury market is mostly driven by U.S. Federal Reserve policy, inflation projections, and the magnitude of government borrowing. Government bond issuances are expected to soar in the coming months, as the federal government finances a massive deficit.

The higher the interest rate offered by a bond, the greater its appeal for investors. Higher interest rates translate into greater demand. When the budget deficit is high, as it is now, a large quantity of bonds must be sold to finance the deficit, which in turn means the government is compelled to offer higher rates of interest to sell a sufficient quantity of bonds.

The interest rate on Treasury bonds is the single most important rate of interest within the broader economy. When bond rates rise, all borrowing rates tend to rise.

Together, these factors should push Treasury yields higher over time. The 10-year Treasury rose yesterday to 1.77%, reversing some of this week’s decline.

At this crossroads in the market, a generally appropriate portfolio allocation is 50% stocks, 25% hedges, 15% cash, and 10% bonds.

For the growth portion of your stock sleeve, I strongly recommend quality investments in the marijuana sector. To be sure, pot stocks have been in a slump this year, but they’re poised to bounce back. Marijuana investments are resistant to broader cyclical trends in the economy and external risks such trade war. Legalization serves as a powerful tailwind.

Cannabis stocks rallied across the board Thursday, in the wake of a historic vote in the U.S. House in favor of legislation that would lift the federal ban on marijuana. Several larger-cap marijuana stocks soared by more than 10%.

The bill, introduced by House Judiciary Committee Chairman Jerrold Nadler (D-NY), passed Wednesday by a 24-10 vote in favor. The bill includes provisions to expunge past criminal records for marijuana violations and would implement a 5% cannabis sales tax. The prospect of greater tax revenue is catnip for lawmakers.

The House vote was just a first step toward a complete lifting of the federal ban, but it was symbolically important and cheered pot investors who have been down in the dumps lately. If you’re looking for the best pot stocks, click here for our report.

So as you come to this investment fork in the road, with growth in one direction and safety in the other, I echo Yogi Berra’s advice: Take it.