Despite the increasing public scrutiny over how social media giant Facebook (NSDQ: FB) handles its users’ private data, its share price keeps going up. Currently trading near $200, FB has gained more than 60% since bottoming out below $125 less than one year ago. 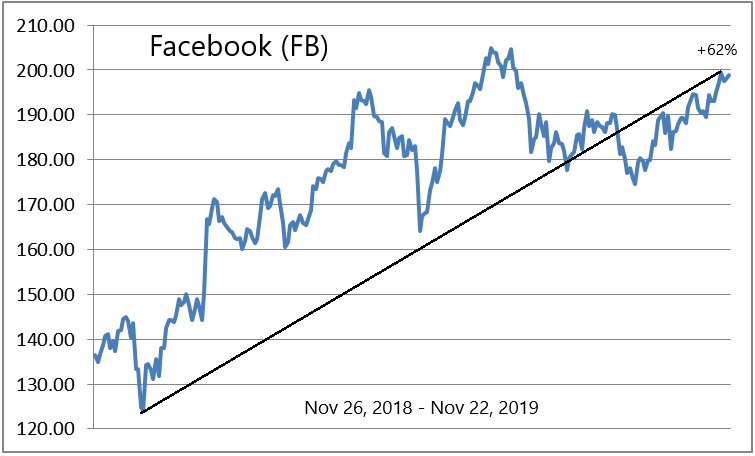 I believe Facebook’s share price could revisit $125 within the next 12 to 18 months for reasons I’ll get to in a moment. But first, let’s take a quick look at why Facebook is so valuable in the first place.

Facebook has a market capitalization (total stock market value) of $570 billion. That makes it the fifth most valuable company in the S&P 500. It ranks behind only Microsoft (NSDQ: MSFT), Apple (NSDQ: AAPL), Alphabet (NSDQ: GOOGL), and Amazon (NSDQ: AMZN).

That’s pretty stunning when you consider Facebook did not come into existence until 2004 and only started trading publicly seven years ago. Perhaps more so than any company in the world, Facebook has capitalized on the basic human need to communicate.

Even after removing 3 billion fake accounts six months ago, Facebook still had 2.4 billion monthly active users (MAUs). That means roughly one-third of the world’s entire population is regularly using Facebook to share recipes, post funny pictures of their pets, and brag about their grandchildren.

In addition, they are buying stuff from ads that run on Facebook. In fact, they are buying so much stuff that Facebook earned more than $17 billion in ad revenue during the most recent quarter. That is a 28% increase over ad sales during the same quarter the year prior.

Ad sales account for more than 98% of Facebook’s total revenue. For that reason, anything that threatens Facebook’s ability to sell ads could send the company’s share price tumbling.

All Politics Is Local

Former Speaker of the House Tip O’Neill famously observed that “All politics is local.” By that, he meant that to get elected a candidate must always prioritize the needs of his constituents above all else.

That thinking makes sense when it comes to creating jobs and improving transportation in a specific area. It’s no accident that the most expensive highway project in U.S. history, Boston’s “Big Dig,” broke ground in Tip O’Neill’s home state of Massachusetts while he was in office.

Facebook is headquartered in Menlo Park, California at the heart of Silicon Valley. However, less than half of the company’s 43,000 employees live or work there. In a recent survey, Facebook ranked #30 on a list of California’s biggest employers.

In addition, the community that exists on Facebook does not share a single city, state, or country of citizenship. The United States is not even home to Facebook’s biggest audience. That honor goes to India with 269 million MAUs, nearly 50% more than the company’s 183 million users living in the USA.

That degree of geographic dispersion creates a political problem for Facebook. The same ubiquitous aspect of Facebook’s existence that allowed it to grow so fast could also pose an existential threat. If Facebook is everywhere and nowhere all at once, there are no politicians to protect its local interests.

That is why the 2020 presidential election could have a direct impact on Facebook’s future profitability. Already, several democratic candidates have assailed Facebook as an example of the type of business that must be more tightly regulated to avoid a repeat of the outside election interference that occurred in 2016.

Facebook founder and CEO Mark Zuckerberg has repeatedly stated his commitment to preventing outside influences from accessing user data during the next election. Whether he can make good on that promise, or whether he is sincere, remains to be seen.

It may not really matter. Even if next year’s election goes off without a hitch, there will still be the suspicion that the victor was somehow able to access Facebook’s user data to manipulate the outcome.

For that reason, I would not be comfortable holding Facebook stock into next year’s election cycle. If you do own it, I suggest either placing a stop order beneath it or buying a put option on it to protect your profit.

Facebook has staged a remarkable rally over the past 12 months. Now priced at roughly 22 times forward earnings and more than eight times annual sales, the stock appears fully valued to me. As well as FB has performed in the past, it is unlikely to repeat that performance going forward.

Editor’s Note: Jim Pearce is the chief investment strategist of our flagship publication Personal Finance. As such, he’s one of the smartest investment advisors around. But his article today merely scratches the surface of how Investing Daily can help you build wealth.

A case in point is our new initiative, called the “Income Millionaire Project.” The goal of this program is simple: Show 1,000 regular investors how to quickly make $1 million in retirement income… without taking on extraordinary amounts of risk.

That’s $1 million…each. Do the math: we’re talking about a total of one billion dollars.

Want to get in on the action? There’s still time. Click here now for details.