This Is a Bust: Why Pot Policing Trends Matter

With poll numbers favoring marijuana legalization now showing majority support in the U.S., you’d think it would be easy for cannabis consumers to be open about their use of this increasingly popular herb.

Think again. Stigma against marijuana lingers. And that’s why marijuana investors need to be careful. Nothing is preordained in this still risky sector.

Consider this 1905 Washington Post article, in which an anthropology professor describes his experimental smoking of marijuana and the symptoms that he claims to have experienced:

“Everything seems to move around the smoker, this whirl becoming faster and faster, until all sense of his surroundings is lost…

The next step of his intoxication is full of terrors. Troops of ferocious wild animals march before the vision of the smoker. Lions, tigers, panthers, and other wild beasts occupy his vision. The wild animals are then attacked by hosts of devils and monsters of unheard of shapes. The smoker becomes brave and possessed of superhuman strength. It is at this stage of the debauch that murders are committed by the smoker.”

Mmmkay. Fast forward to 2019 and marijuana is increasingly legal, as well as lucrative. Legalization enjoys powerful momentum, but investors should realize that there will be setbacks along the way.

You need to pick pot stocks with demonstrated staying power. That means solid balance sheets, growing revenue and earnings, competent management, and a compelling business model. It’s not enough to simply be a “weed” stock.

Sure, marijuana legalization continues apace, with a growing number of states loosening prohibitions against cannabis.

But at the same time, the number of persons arrested in the U.S. for violating marijuana laws has risen for the third consecutive year, according to the most recently available data from the U.S. Federal Bureau of Investigation.

According to the FBI’s Uniform Crime Report, police made 663,367 arrests for marijuana-related violations in 2018, which comes to an arrest every 48 seconds. That’s more than 21% higher than the total number of persons arrested for the commission of violent crimes (521,103). The national increase in marijuana arrests has occurred in every year of the Trump administration.

Social conservatives form a core political constituency of President Trump, so it’s no surprise that law enforcement has taken a harsh stance against pot users. Maybe in college you saw the infamous 1936 anti-pot film Reefer Madness. For many people, such views aren’t campy fun. They’re reality.

Among those arrested for cannabis-related activities, about 90% (608,776) were arrested for marijuana possession offenses only (see chart). 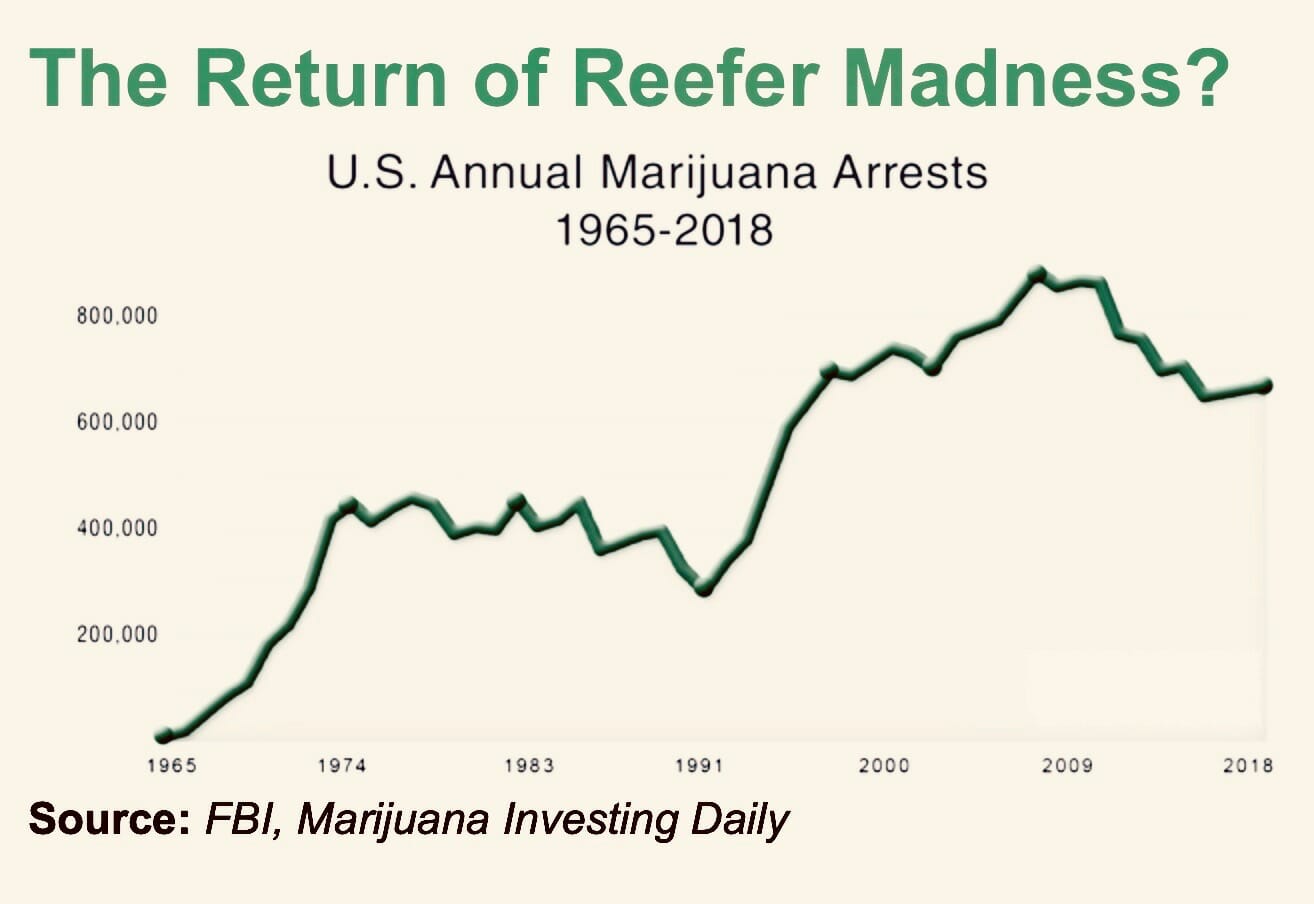 These statistics reflect the reversal of a trend of declining arrests that began following the year 2007, when police made a record 872,721 total marijuana-related arrests throughout the U.S.

Marijuana-related arrests were least likely to occur in western states, where most have legalized pot. Arrests were more prevalent in the northeast, where they made up 53% of all drug arrests.

The Cheech and Chong stereotype is being challenged every day, as more people tell their own stories of how cannabis has been beneficial to their health and well-being.

Firsthand testimony before city councils and state legislatures, network news stories and documentaries on CNN, National Geographic and Discovery Channels, print media and the Internet have helped many non-users understand the importance of cannabis to people suffering from chronic pain, cancer, AIDS, epilepsy, MS, arthritis, depression, insomnia, glaucoma, and a host of other common ailments.

After being penalized for failing drug tests, professional football and basketball players are coming out to testify how cannabis is a much better treatment for their pain, injuries, and concussions than prescription drugs and a healthier alternative to alcohol for relaxation after a game. As a result, sports organizations are starting to reassess their policies.

Late night TV hosts still joke about the stereotype that all pot smokers want to do is sit around getting high, eating Doritos, playing video games, and forgetting to vote or study.

While we laugh, it’s easy to forget that a multi-billion-dollar biotechnology industry is emerging to create cannabis-oriented treatments for chronic diseases and ailments. Many of these fledgling marijuana biotechs are publicly traded and they’ve made early investors rich.

It’s also easy to forget that a diverse recreational industry is arising around marijuana: branded edibles and cigarettes, pot tourism, paraphernalia, cookbooks…you name it. Many of the companies catering to this demand are small-cap stocks with exponential growth potential.

Read This Story: Your Investment Guide to The Marijuana Small Fry

When it comes to the morality of marijuana legalization, Marijuana Investing Daily is strictly agnostic. Successful investors take the world not as they wish it to be, but the way it really exists.

Marijuana legalization is a fact of life and it’s here to stay. But if you want to make money on the trend, you need to understand and prepare for the inevitable headwinds. This publication is here to help you, every step of the way.

Questions or comments about marijuana policing trends and how they might affect investors? Drop me a line: mailbag@investingdaily.com.