Will Coal’s Sunset Cast a Shadow on Oil?

The once-dominant energy source known as “King Coal” has been dethroned by cleaner alternatives. Over the past decade, the U.S. coal industry has been decimated. After a steady rise in demand that lasted nearly 50 years, U.S. coal consumption peaked about a decade ago.

Among investors looking to make money in the energy sector, It begs the question: will oil suffer the same fate as coal? I examine oil’s likely trajectory, below.

One thing is clear: coal’s decline appears unstoppable. Since its peak in 2007, coal consumption in the U.S. has fallen an astounding 44% (see chart). 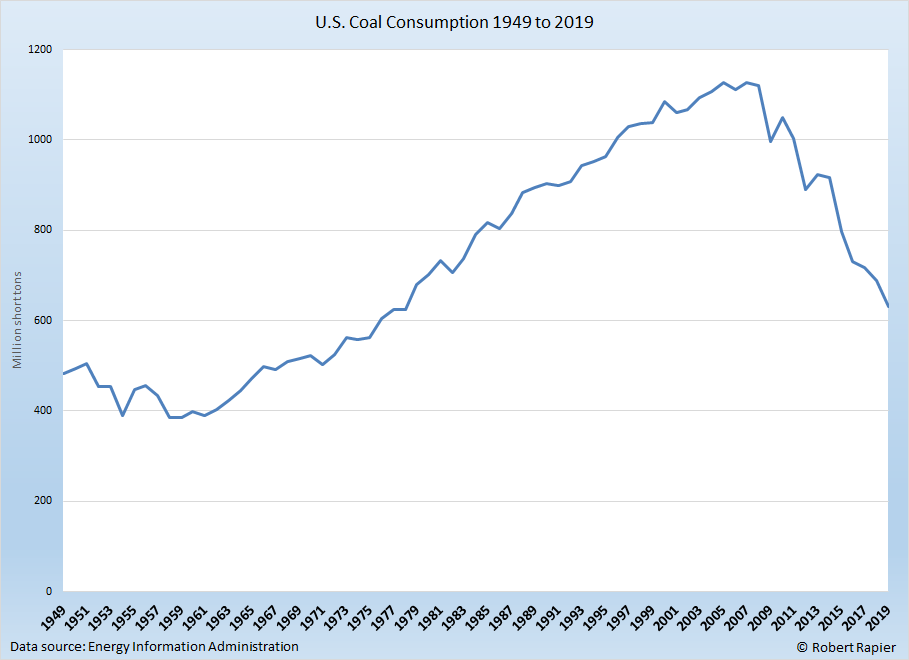 There are two primary reasons behind coal’s death spiral. Both were aided by legislation aimed at reducing carbon dioxide emissions from power plants.

The first was that the shale gas boom in the U.S. unleashed massive new supplies of cheap natural gas. This made it economical for power plants to switch from coal to natural gas. Power produced from natural gas has lower associated carbon dioxide emissions.

Numerous coal companies declared bankruptcy as demand for coal declined. The one coal-focused fund I know about, the VanEck Vectors Coal ETF (KOL), has lost 70% of its value over the past decade.

There are those who have suggested that oil will soon follow this pattern. In fact, such beliefs are partially behind the bearish sentiment in the oil sector. But there are important reasons to believe that oil’s (eventual) decline won’t be like coal’s.

The continued electrification of transportation is the reason some believe that the world is on the cusp of steep demand declines for oil.

But consider the evidence.

First, while I do agree that electric vehicle (EV) growth will remain robust for many years, the turnover of the transportation fleet is a slow process. Many power plants were in a position to rapidly switch from coal to natural gas as legislation and economics made the switch appealing. They didn’t have to wait for the coal-fired plants to reach the end of their useful life. If they had, the transition would have been a much slower process.

Let’s look at three important markets for EVs to highlight highlight the differences between oil and coal.

Norway leads the world in the penetration of EVs. From 2009, EV sales in Norway grew by triple digits for seven years. EV market penetration reached 5% in Norway in December 2016, and 10% less than two years later in October 2018. This is five times the new vehicle market share of EVs in the U.S.

But according to the 2019 BP Statistical Review of World Energy, Norway’s oil consumption in 2018 grew by 5% over 2017 to the highest annual consumption number on record. There are signs that Norway’s transportation fuel usage has been declining, but that only fell by 4% from 2014 to 2018. Diesel demand was actually higher in 2018 relative to 2014. Further, that decline lagged all the countries around Norway, which don’t have nearly Norway’s EV usage.

A 4% decline in four years is something, but consider that U.S. coal demand has been falling by nearly 5% per year. In other words, even if EVs were driving the decline, it’s very small compared to coal’s. Keep in mind that no other country comes close to matching Norway’s EV penetration numbers.

The largest EV market in the U.S. is California, where the EV market share reached 4.8% in 2017, and surged to 7.8% in 2018. But data from the Energy Information Administration (EIA) shows that California’s oil consumption has risen each year since 2012.

The California Department of Tax and Fee Administration (CDTFA) did show a 0.4% decline in Net Taxable Gasoline gallons in 2018, but that followed a 10-year high gasoline consumption level in 2017.

China is the largest EV market in the world. EV sales in China were over three times those of the U.S. last year, with EVs hitting a 4.2% share of all new vehicles. Meanwhile, China’s oil demand grew 5.3% last year. This was a new all-time high above 13 million barrels per day (BPD), and above the 10-year average annual growth rate of 5.1%.

There are a couple of reasons behind the lack of a major oil response. Population growth and low gasoline prices have helped push the total number of annual vehicle miles traveled to record highs. That helps offset, and in some cases can completely offset, the impact from an increase in the number of electric vehicles on the roads.

The three most important EV markets in the world have shown little to no reduction in oil demand as EV sales have ramped up. I do expect EVs to eventually impact oil demand, but there are two clear lessons.

First, the impact won’t happen quickly. The world as a whole significantly lags the three EV markets discussed here. As a result, global oil demand will continue to grow at an average of more than a million BPD for several more years. Global oil demand isn’t on the cusp of peaking.

Second, when the decline begins, it won’t be nearly as steep as coal’s. The turnover in the transportation fleet can’t happen nearly as quickly as power plants could switch from coal to natural gas.

The oil industry has suffered sharp losses in the stock market this year, but that’s primarily a function of too much supply, not because of softening demand. It’s an important distinction, because oversupply can be resolved. U.S. shale oil production will slow, and OPEC will continue to try to adjust production to account for shale oil output.

It will take a while for bearish sentiment to shift, but the fundamentals for oil look quite different than those for coal. The bottom line: Investors should not abandon oil-related opportunities, not by a long shot.

Editor’s Note: As you’ve seen in the above article, our colleague Robert Rapier is an expert in the energy sector. But maybe you don’t have the appetite for energy’s volatility. The good news is, our investing team has developed a steady and reliable way for average investors to beat the market…consistently and with less risk.

This technique is so powerful – and safe – we’re guaranteeing when you use it, you’ll have the opportunity to generate $1 million (or more) in retirement cash. And we’ll even send you a $1,000 check to launch your journey.

Spaces are going fast. Click here to get started.