You should never squelch the sense of wonderment in a kid’s life. My daughter was well into the second grade before she figured out on her own that there was no Santa Claus.

In the more innocent time of 1897, an eight-year-old girl named Virginia O’Hanlon wrote to the New York Sun, asking if there was a Santa Claus. The newspaper’s editors wrote a poignant reply that touched upon the eternal love behind the message of Christmas, to conclude metaphorically that “Yes, Virginia, there is a Santa Claus.”

That famous phrase has become part of American folklore. Which brings me to the phenomenon known as the Santa Claus Rally, the tendency of stocks to rise during the last month of the year. Can we believe in the rally this year? Yes, Virginia, we can. Let’s look at the backdrop.

The Grinches of Wall Street…

As of this writing on Monday morning, all three main U.S. stock market indices were trading in the red. President Trump’s tweet today, announcing that he would restore tariffs on U.S. steel and aluminum imports from Brazil and Argentina, has thrown investors for a loop.

Because of such risks, I’ve been counseling caution and “defensive growth,” with an emphasis on recession-resistant safe havens such as utilities stocks. These calibrations have paid off.

But if you’ve been heeding the advice of the professional Grinches…well, you’ve left a lot of money on the table.

The perpetual doomsters are a predictable and tiresome bunch. They warn of imminent catastrophe, regardless of fundamentals. The real agenda of these advisers is to separate you from your money. The only people they enrich are themselves.

You’ve seen their advertising pitches: “Sell stocks, sell the house, sell the kids!” These hucksters predict a dystopian world right out of a Mad Max movie…and if you’ve been listening to them, you’ve missed the greatest bull market in history.

And what about last week? For investors, it was another reason to give thanks. 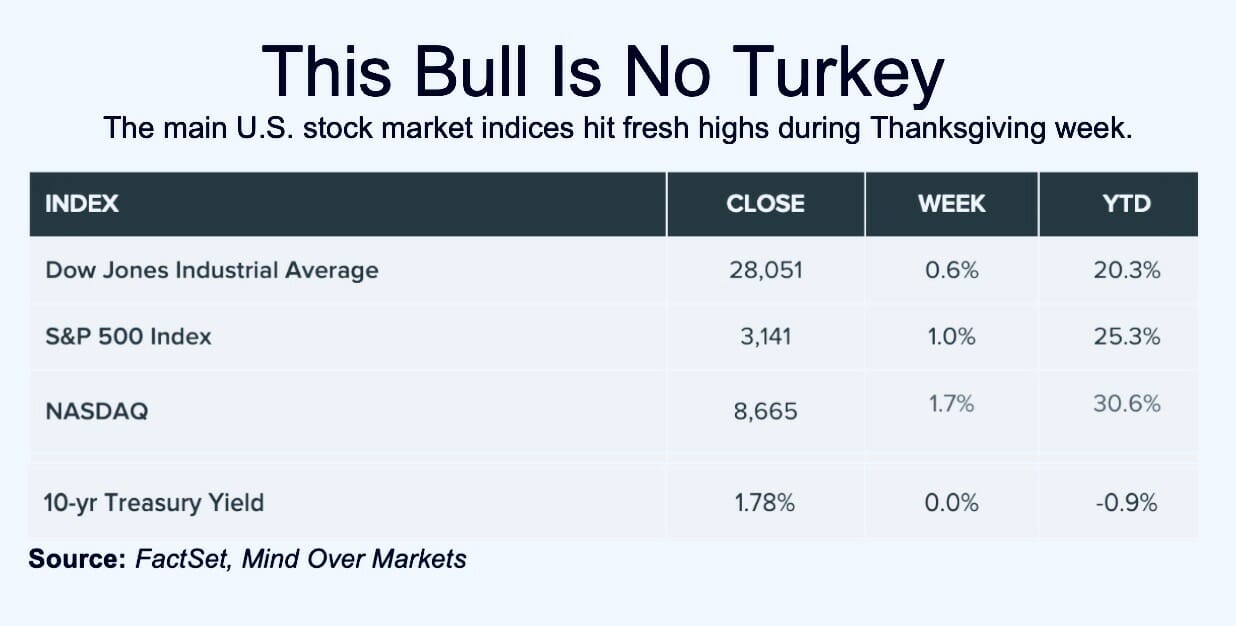 I think hopes for a trade truce are illusory. But more importantly, the exuberance on Wall Street is justified by the latest economic statistics, which show a resilient recovery.

There’s been a decrease in the number of people applying for first-time unemployment benefits and a rise in October personal spending, signs that we approach the crucial holiday shopping season in decent shape.

Stocks are enjoying their best year in more than half a decade and bonds are up by the most in 17 years.

Here’s even more good news for you: stocks typically perform well after Thanksgiving. Since 1950, the average return in December has been 1.5%.

You should rotate toward defensive sectors and dividend-paying stocks, which generate income and growth but also ballast.

You also should tap into trends that boast multi-year momentum, regardless of seasonal fluctuations.

Put aside trade talks. In my mind, they constitute the Theater of the Absurd. I don’t believe a single word uttered by any government official about the trade war. Neither should you.

A major source of investor confidence is the consumer, and rightfully so. As we face the final weeks of 2019, what matters most are the fundamentals as they pertain to consumer spending. Roughly 70% of U.S. gross domestic product is consumer spending and that’s where the rubber meets the road, especially during the holiday season.

Robust third-quarter retail sales presage a prosperous holiday season this month, paving the way for a probable Santa Claus Rally. Bellwether retailers in the most recent quarter blew away expectations on both the top and bottom lines.

The consumer is in a mood to spend. Unemployment hovers at a 50-year low of 3.6%, wages are rising at a rate that exceeds 3%, and household debt is falling.

According to a recent survey by the National Retail Federation (NRF), consumers on average already have finished 24% of their planned shopping, compared with 16% at this same time a decade ago. The NRF survey reveals that consumers plan to spend 4% more this year versus 2018.

Today is “Cyber Monday,” which is expected to be even more lucrative than Black Friday. Cyber Monday 2019 is projected to rack-up $9.4 billion in e-commerce revenue, representing an increase of about 19% over last year.

Traditional retailers, notably Target (NYSE: TGT) and Walmart (NYSE: WMT), played it smart this year. Ahead of the holiday, they preempted declines at physical locations by beefing up their websites. They improved delivery and made it easier to return merchandise.

Target, in particular, has stayed relevant in the e-commerce age by making each physical store a pleasant and convenient shopping experience. The company is betting that ambiance still matters and its efforts have been rewarded with growing foot traffic and earnings. Target’s stock has nearly doubled this year, rewarding patient investors who weren’t scared off by the threat from Amazon (NSDQ: AMZN).

Read This Story: Target: The Retailer that Survived Amazon

Economic indicators are strong. Retail sales are soaring. Demand for homes is rising, but inventory is limited. That pushes up home prices, which boosts the psychological “wealth effect.” The United States has become the global growth engine.

The Federal Reserve meets again December 10-11. Wall Street doesn’t expect another rate cut. But it’s a moot point. The aforementioned tailwinds for stocks should persist without fiscal stimulus. Sure, stocks are overvalued. But for now, worries about a correction are out the window.

The stock market drops when consumers get stingy. The converse is true. Despite Monday’s turbulence, all signs point to a year-end pop in stocks.

Make no mistake. The Grinches could still come along to steal the rally. Risks remain, in the form of trade war escalation, geopolitical flare-ups, or negative economic data. We’re always just a few presidential tweets away from a stock market rout. But right now for investors, it’s beginning to look a lot like Christmas.