With apologies to William Shakespeare, trade talks are a tale told by an idiot, full of sound and fury, signifying nothing.

Despite the reassuring blather we’ve been hearing all year from officials in Washington and Beijing, we’ve seen zero progress on trade. One day a deal is supposedly close. The next day, there’s renewed antagonism. In the process, investors get whipsawed.

As of this writing on Tuesday morning, all three main U.S. stock market indices were trading deeply in the red, with the Dow down by more than 400 points. Investors ran for the exits after President Trump suggested today that he may want to delay a trade deal with China until after the 2020 election. Also today, China hinted that it would soon release a blacklist of sanctioned U.S. companies.

And yet, only a few days ago, official sources assured the American public that a Phase 1 trade deal was “close.” A sure way to lose money is to take the Sunday morning news shows seriously.

Ever since the Trump administration launched the U.S.-China trade war in January 2018 with tariffs on solar panels and washing machines, I’ve been warning you to reduce your exposure to companies most affected by the trade war, such as export-dependent manufacturers. Indeed, these stocks have been under the worst pressure lately. The pain won’t end anytime soon, as tariffs dampen manufacturing activity.

Case in point: The Institute for Supply Management (ISM) reported Monday that its Purchasing Managers’ Index (PMI) of U.S. factory activity dropped 0.2 to a reading of 48.1 last month. A reading below 50 indicates contraction in the manufacturing sector. 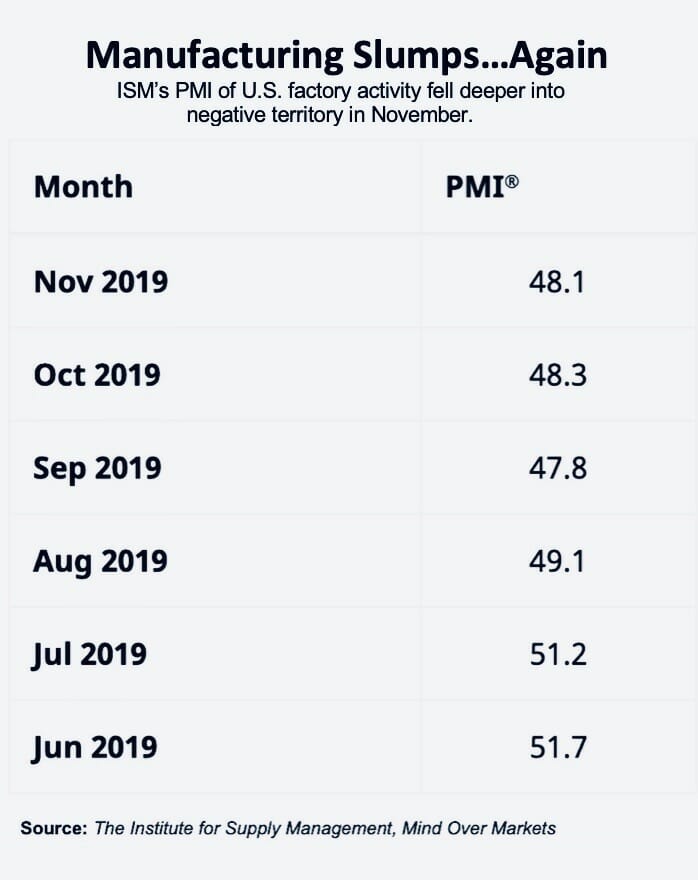 In a separate report Monday, the U.S. Commerce Department reported that construction spending dropped 0.8% as investment in private projects fell to its lowest level in three years.

Unless the global trade war abates, economic growth is unlikely to pick up. And on trade, the news keeps getting worse.

House Speaker Nancy Pelosi yesterday said Democrats are still in discussions with the White House to reconcile different approaches on how to enforce the pending U.S.-Mexico-Canada Agreement (USMCA).

USMCA, which replaced the North American Free Trade Agreement (NAFTA), was ratified by Mexico in June but awaits ratification by the legislatures of the U.S. and Canada.

Although the White House touts USMCA as a vastly better deal, it barely differs from NAFTA. USMCA is essentially the status quo, with a new name. Think of USMCA as the “new Coke” of trade pacts.

The U.S. Congress this month is struggling to muster the votes for USMCA ratification, but opposition remains, especially from Democratic members who want greater protections for American workers.

Chaos over trade policy is undermining business confidence; this uncertainty will only grow worse as the 2020 election gets closer. Which is a pity. As the retail sector thrives and consumers indicate a willingness to spend, conditions are in place for a Santa Claus Rally this month. But trade tensions could derail it.

President Trump took Wall Street by surprise on Monday and sent stocks into a tailspin, when he tweeted his intention to slap tariffs on steel and aluminum from Brazil and Argentina.

Trump complained that the two South American countries “have been presiding over a massive devaluation of their currencies, which is not good for our farmers.”

China is the world’s biggest soybean importer. Brazil and Argentina (and Russia) have become alternative suppliers of soybeans and other key agricultural products to China, siphoning market share away from the U.S. farm belt. American farmers are experiencing record bankruptcy rates as the trade war drags on.

Soybeans were the biggest U.S. agriculture export to China last year at a value of $12.3 billion. Soybeans are a crucial foodstuff with a wide variety of uses, such as in animal feed and vegetable oils.

The Trump administration is immediately adding new 25% tariffs on steel and 10% on aluminum from Brazil and Argentina. Both countries were blindsided.

But here’s the irony: the two countries stand to gain more from selling farm products and soybeans to China than they would lose from reduced steel and aluminum sales. Meanwhile, U.S. manufacturers (notably Detroit automakers) face greater input costs because of the new tariffs.

The tit-for-tat trade war cycle won’t end before the 2020 election. Both Beijing and Washington have dug in their heels.

Don’t expect USMCA to get fully ratified before the end of the year, either. The Democratic-controlled House isn’t in a hurry to hand Trump a “win” on USMCA.

Exacerbating the nervousness of investors, Trump yesterday pressured the Federal Reserve to take steps to devalue the U.S. dollar. Trump is suggesting that the Fed follow the path of European central bankers and embrace interest rates of zero or less.

Trump wants to give the U.S. economy a shot in the arm for obvious reasons: increasing signs of a recession threaten his 2020 re-election prospects.

The Fed holds its final monetary meeting of the year next week. The expectation on Wall Street is that the Fed won’t cut rates this time around, despite the weakness of recent economic reports. If the Fed cuts rates further, the implication would be that the central bank expects a recession, a bearish signal that could topple stocks.

One way to cope with all of this policy chaos is to focus on investment mega-trends that enjoy powerful tailwinds. One such trend is the global implementation of 5G (“fifth generation”) wireless technology. 5G will serve as the infrastructure for the Internet of Things. 5G is largely resistant to policy machinations over tariffs and interest rates. To learn our favorite 5G plays, click here now.

Industrials got clobbered yesterday (and they’re getting hit again today) because of weak PMI numbers and trade hostilities, but utilities stocks remain relatively strong, which has been the case all year. For the best utilities stocks, consult our “dividend map” of high-yielders.

I’m also keen on the marijuana industry. The recent swoon of pot stocks has put several intrinsically sound cannabis investments on the bargain shelf. For the cream of the crop in marijuana stocks, click here for a free presentation.

So ignore the bloviating from trade negotiators and media pundits. Like the Energizer bunny in the TV commercial, the trade war will keep going and going and going. Stick to investment trends (e.g., utilities, 5G and marijuana) that will outlive unpredictable public policy.