A Ray of Financial Hope for Hemp

Stereotypes die hard. Even though marijuana and hemp companies have joined the mainstream of capitalism, many banks still treat them as sinister back alley entities.

This reluctance of financial institutions to lend money to “canna-business” has generated a severe cash crunch among pot and hemp companies, in turn weighing on their shares.

But relief came this week, at least for the hemp sector. On Tuesday, U.S. and state regulators announced to bankers that hemp businesses should not be regarded with any more wariness than other clients.

Hemp is now legal in the U.S., thanks to passage of the 2018 Farm Bill. Signed into law on December 20, 2018 by President Trump, the sweeping agricultural legislation essentially decriminalizes hemp (see chart). 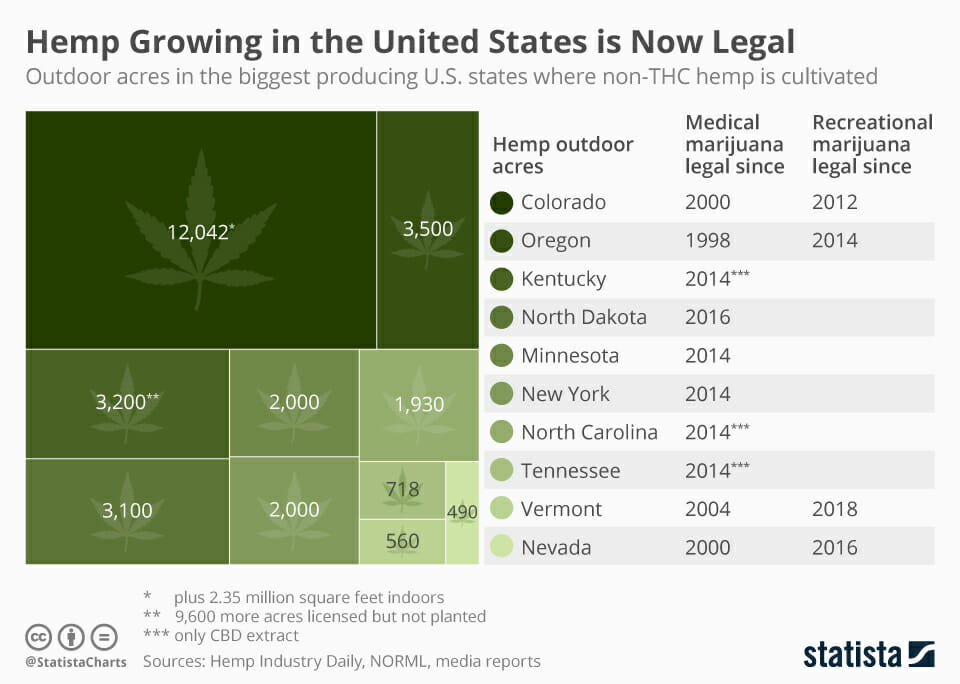 States and localities are starting to get accustomed to the tax revenue from hemp growers, a trend that will further cement hemp’s newly legal status. But the inherently cautious banking industry has been slow to come around.

Growing industrial hemp became illegal in the 1970s when the federal government strengthened the criminal code on marijuana and related products. Hemp got caught up in the “war on drugs,” but it contains very little of the psychoactive component tetrahydrocannabinol (THC) found in marijuana that makes people high.

Hemp is a sturdy and versatile fiber with a myriad of industrial and medical uses, but hemp producers have grappled with an inability to receive loans and banking services. No longer. A regulatory change announced Tuesday should pave the way for easier credit.

Federal and state bank regulators announced Tuesday that they were jettisoning an onerous mandate that dis-incentivized banks from lending to hemp companies.

Banks are now freed of the requirement to treat their hemp customers as suspicious and file copious paperwork for each interaction. The red tape was born of largely unfounded fears that hemp producers could be fronts for illegal money launderers.

U.S. Rep. Ed Perlmutter (D-CO) tweeted about Tuesday’s federal and state banking guidance, stating: “This is a good step forward and will help Colorado’s hemp industry and hemp businesses across the country. Now we need to pass the #SAFEBankingAct to ensure greater access to the banking system for all marijuana, hemp and CBD businesses.”

Perlmutter is referring to one of the most auspicious legislative developments for cannabis in many years.

The House of Representatives in late September advanced a bill that would protect banks that service the cannabis industry from being penalized by federal regulators. Called the Secure And Fair Enforcement (SAFE) Banking Act, the legislation seeks to expedite the provision of financial services to cannabis companies by removing the fear of potential federal action against lenders.

The SAFE bill is now in the Senate, where the odds of passage look good. President Trump hasn’t indicated whether he would sign the legislation, but he has other things on his mind right now, as televised impeachment hearings proceed this week in Congress. When the dust settles on Capitol Hill, politicians will get back to the job of legislating and the SAFE bill is almost certain to move to the forefront.

Cannabis has been used for medicinal purposes for thousands of years. Chemical components in cannabis called cannabinoids activate specific receptors in our bodies that produce pharmacological effects in the nervous and immune system.

Cannabinoids provide benefits in the treatment of cancer and treatment-related side effects. Cannabinoids can be taken by mouth, inhaled or sprayed under the tongue.

Cannabis has been studied in laboratories and clinics for relief of pain, nausea and vomiting, anxiety, and loss of appetite. Studies demonstrate that it can be useful in the symptoms of cancer and has been shown to kill cancer cells in the lab.

THC is the main component responsible for marijuana’s mind-altering effects. Cannabinol and cannabidiol are compounds that have some of the properties of THC, but cause fewer psychoactive effects — i.e., the high.

The bottom line? The legalization of marijuana is a once-in-a-lifetime investment opportunity. But don’t give short shrift to hemp.

According to the research firm Research and Markets, the global industrial hemp market is projected to grow from USD 4.6 billion in 2019 to USD 26.6 billion by 2025, posting a compound annual growth rate of 34%.

The U.S. farm bill represented an inflection point. The legalization of the cultivation of industrial hemp is a boon for major agricultural companies but also for the smaller entrepreneurial outfits that are devising new uses for hemp. These research and development efforts are leveraging hemp seed and hemp seed oil for applicability in a wide range of industries.

Tuesday’s statement about hemp was issued by the Federal Reserve, the Federal Deposit Insurance Company, and other state and federal regulators. The official notice tells banks that they can now treat hemp producers like other customers.

This regulatory change could provide a huge lift for the hemp industry. We’ll soon see if bankers step up to the challenge.