Did Merck Buy a “Lottery Ticket” in ArQule?

Sometimes, there is just no pleasing anyone. Case in point: medical research company ArQule (NSDQ: ARQL). Until a few days ago, ARQL was just another small-cap biopharma stock losing gobs of money.

That all changed on December 9 when global health care giant Merck (NYSE: MRK) announced that it will buy ArQule for $20 per share, in cash. The deal, assuming it is approved by a majority of ArQule shareholders, should close within a few months.

ARQL began 2019 under $3 and was trading below $10 prior to this development. You might think all of ArQule’s shareholders would be ecstatic to double their money overnight and realize a nearly seven-fold gain in less than a year. 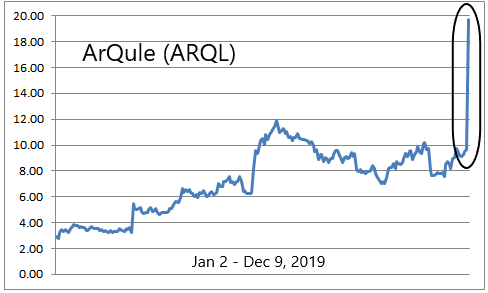 Apparently not. Just hours after this deal was announced, a bevy of class-action lawsuit notices was issued by the usual array of Wall Street ambulance chasers. They allege that the company could have gotten a better price had it negotiated with other potential buyers.

That may be true but is nearly impossible to prove. Buying a profitable company with tangible assets is a fairly straightforward task. The value of everything being bought can be easily quantified.

However, finding a willing buyer for a company like ArQule is considerably more difficult. Like most small biopharma firms, ArQule is highly unprofitable. During its most recent quarter, ArQule reported a loss of $10.7 million. That’s nearly double its loss during the previous quarter.

Also, ArQule’s most valuable assets are its human capital and intellectual property. Assigning a monetary value to those items is at best an educated guess. No matter how many Ivy League business professors are called to the witness stand, there simply is no way to establish an agreed-upon value for ArQule.

In fact, a strong argument can be made that Merck is overpaying for ArQule. Even after its share price doubled, ARQL was still valued at 500 times annual sales. That’s because sales declined from $5 million to only $200,000 during the last quarter. But even that’s not a dealbreaker since nobody really expects a research company like ArQule to make much money.

In that regard, owning a small biopharma stock like ARQL is more akin to buying a lottery ticket. It trades based on the perceived likelihood of future income. Assuming, of course, that one of its drugs gains FDA approval.

ArQule’s most promising drug just began the phase 2 trial stage, far from being a shoo-in to win FDA approval. A lot of things can still go wrong that could torpedo this drug’s chances of ever hitting the market.

ArQule was burning through a lot of cash and might soon run out of money. A secondary stock offering would be one way to raise more cash, but that would dilute existing shareholders and drive down its share price.

In that case, I could see why a disgruntled shareholder might sue the company. Especially if it came to light that ArQule had an offer on the table to be acquired for twice its current share price.

ArQule’s board took the path most advantageous to its shareholders and accepted Merck’s generous offer. Yes, those same directors own stock that is now twice as valuable as it was a week ago. There is nothing illegal about that and is their reward for successfully guiding the company to this lucrative endpoint.

I believe there is a more likely explanation for the legal challenge to this deal. Perhaps one of Merck’s rivals had been contemplating acquiring ArQule and is now trying to horn in on the deal.

That ploy seldom works. Eventually, the scorned suitor sulks away with nothing to show for it other than a tacit admission that one of its competitors outfoxed them.

Assuming this deal closes, only Merck will have the opportunity to profit from its investment in ArQule. We may not know how that turns out for a few more years.

By the way, you know who really made a lot of money off of this deal right now? Traders that owned call options on ARQL expiring next week, that’s who.

Prior to last week, the $10 call option had no intrinsic value at all. Intrinsic value is the difference between the option’s strike price and the underlying stock’s current market price.

In a single day, that same option gained nearly $10 of intrinsic value. Some of those option holders stand to earn more than 10 times their money on this trade!

Of course, they also could have lost their entire investment had this announcement been made two weeks later. That’s why you need to know exactly what you are doing when it comes to trading options.

But there are plenty of other ways to make money with considerably less risk. Which brings me to my colleague Jim Fink.

Jim has developed a proprietary method that consistently beats Wall Street at its own game, in markets that are going up, down or sideways.

Jim’s 310F trade is the most accurate way I’ve ever seen to double your stake in just three days… 321 out of 324 trades paid out over the past three years.