In three short words the company’s slogan, Good Stuff Cheap, makes clear what you can expect when you enter one of its stores. Ollie’s specializes in buying liquidated merchandise at a deep discount and passing the savings on to its customers.

On December 10, Ollie’s released Q3 results that confirmed its simple business plan is still working quite well. The company recorded a 15.3% jump in total net sales and a 28.3% increase in adjusted net income per share. That day, its share price spiked 17% to trade above $70 for the first time since August.

Ollie’s opened its first Bargain Outlet store in 1982. At the time, the U.S. economy was reeling after years of high inflation and double-digit unemployment. That summer, the S&P 500 Index dipped below 300 as many businesses went under.

Now, the S&P is above 3,000 while inflation and unemployment are near record lows. The past 37 years have witnessed unprecedented economic growth. In hindsight, the timing of Ollie’s founding was perfect.

The timing of the company’s initial public offering (IPO) was pretty good, too. Ollie’s went public on July 16, 2015. Since then, OLLI has appreciated 236%. That is only slightly less than the 257% gain produced by Microsoft (NSDQ: MSFT) over the same span. 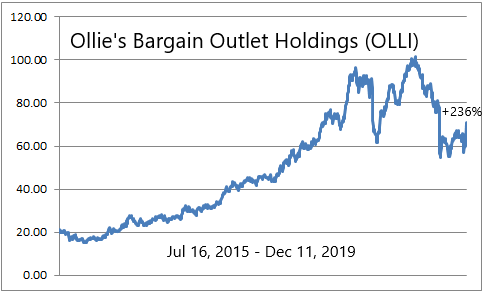 At first glance, a comparison between Microsoft and Ollie’s may seem farfetched. One company is a high-tech behemoth while the other is a low-tech runt. Surprisingly, they have both thrived for a similar reason: making shopping easier.

The recent surge in Microsoft’s share price is due primarily to growth in its Azure cloud computing business. Among other things, the cloud facilitates online consumer transactions popular with millennials that have taken market share away from traditional retailers.

At the other end of the spectrum is Ollie’s, which appeals primarily to older shoppers living on a fixed (and very limited) income. A recent survey revealed that 45% of baby boomers have no retirement savings. For them, being able to buy good stuff cheap is a way of life.

There is nothing to stop baby boomers from going online to buy many of the same goods that Ollie’s sells. They could, but they don’t. For them, an outing to an Ollie’s location is an opportunity to leave the house for a few hours and socialize.

In addition, Ollie’s offers a 30-day “No Hard Time” full money-back guarantee. Simply return the item within a month of purchase to any store and get a full refund, no questions asked. For older shoppers, that process is considerably less onerous than obtaining a refund from an online merchant.

These baby boomers are not going away anytime soon. Every day for the next 10 years, 10,000 baby boomers will turn 65. Boomers are living longer, too. That should provide Ollie’s with a solid customer base for at least the next 20 years.

Sadly, one of Ollie’s founders, Mark Butler, died unexpectedly over the Thanksgiving holiday. The company noted his immense contribution to its success:

“From ringing the first sale in the first Ollie’s store in Mechanicsburg, PA in 1982, to leading the Company’s highly profitable growth to 345 stores in 25 states, Mark built a successful and enduring retail concept, assembled an incredible team, created thousands of jobs and delivered millions of bargains to our customers, while delivering exceptional shareholder value along the way.”

Like all good companies, Ollie’s has a deep management team that can fill the void left by Mr. Butler’s untimely passing. At this point in the company’s development, it is no longer dependent on the contribution of a single person to ensure its success.

In that regard, Ollie’s is no different from any other mature business enterprise. These days, its profitability is mostly a function of smart merchandising decisions and efficient execution.

Of course, we all wish we could go back in time and buy a stock like Ollie’s (or Microsoft) in its early days, but we can’t. Instead, we can take the lessons learned from those examples and apply them to the current generation of market opportunities. And that’s the forte of my colleague, Jim Fink.

Jim has developed a proprietary method that consistently beats Wall Street at its own game, in markets that are going up, down or sideways.

Jim’s groundbreaking “310F” trade is the most accurate way I’ve ever seen to double your stake in just three days… 321 out of 324 trades paid out over the past three years.