I’m an early morning person. The start of the day is when I indulge in my favorite addiction. No, not marijuana. I’m talking about coffee.

Whether in my personal or professional life, I find it invaluable to occasionally take a step back from the daily noise and reflect on the long view. The questions and comments that I receive via email help me in this regard.

No matter how smart you may think you are, there’s always an opportunity to learn more. Philosophers call it “the open mind,” a willingness to consider different ideas or opinions.

Let’s dive into the marijuana mailbag and see what’s on your minds.

“In the past, President Joe Biden has referred to marijuana as a ‘gateway’ drug. I want to invest in pot stocks, but I’m concerned that new medical research will come along to torpedo the industry, the way revelations about second-hand smoke dealt a blow to Big Tobacco.” — Jerry R.

First, let’s get one thing clear. I’m not necessarily a rah-rah booster of Mary Jane and its normalization. As an investor, you should remain coolly dispassionate and leverage investment opportunities as they are, not as you wish them to be.

For example, no sane person is in favor of war. The Russia-Ukraine crisis is a reminder of the bloody misery of military conflict.

However, from time to time, for my other newsletters I’ve recommended aerospace/defense stocks. If you think cannabis is a dangerous gateway drug (and that’s your right), tell your member of Congress or local editorial board. But if you want to make money from “canna-business,” read on.

Despite the fast pace of marijuana legalization, certain falsehoods persist about pot. Many of these myths derive from the War on Drugs that started under President Nixon.

It’s true, Joe Biden spouted some anti-pot rhetoric during the early days of the 2020 presidential campaign at a political town hall. He stated that he wants to see more data about the safety of marijuana use before embracing efforts to legalize it on the federal level.

Now that he’s actually in the White House, Biden has since walked back those remarks, but his previously expressed view is common.

Sure, people who have tried or experimented with marijuana may eventually try harder drugs. But I’m reminded of a George Carlin joke: “We all know that beer eventually leads to hard drugs.”

Joking aside, the empirical science proves overwhelmingly that for most people, marijuana is not a gateway drug and it’s actually less addictive than the coffee I drink (see chart). 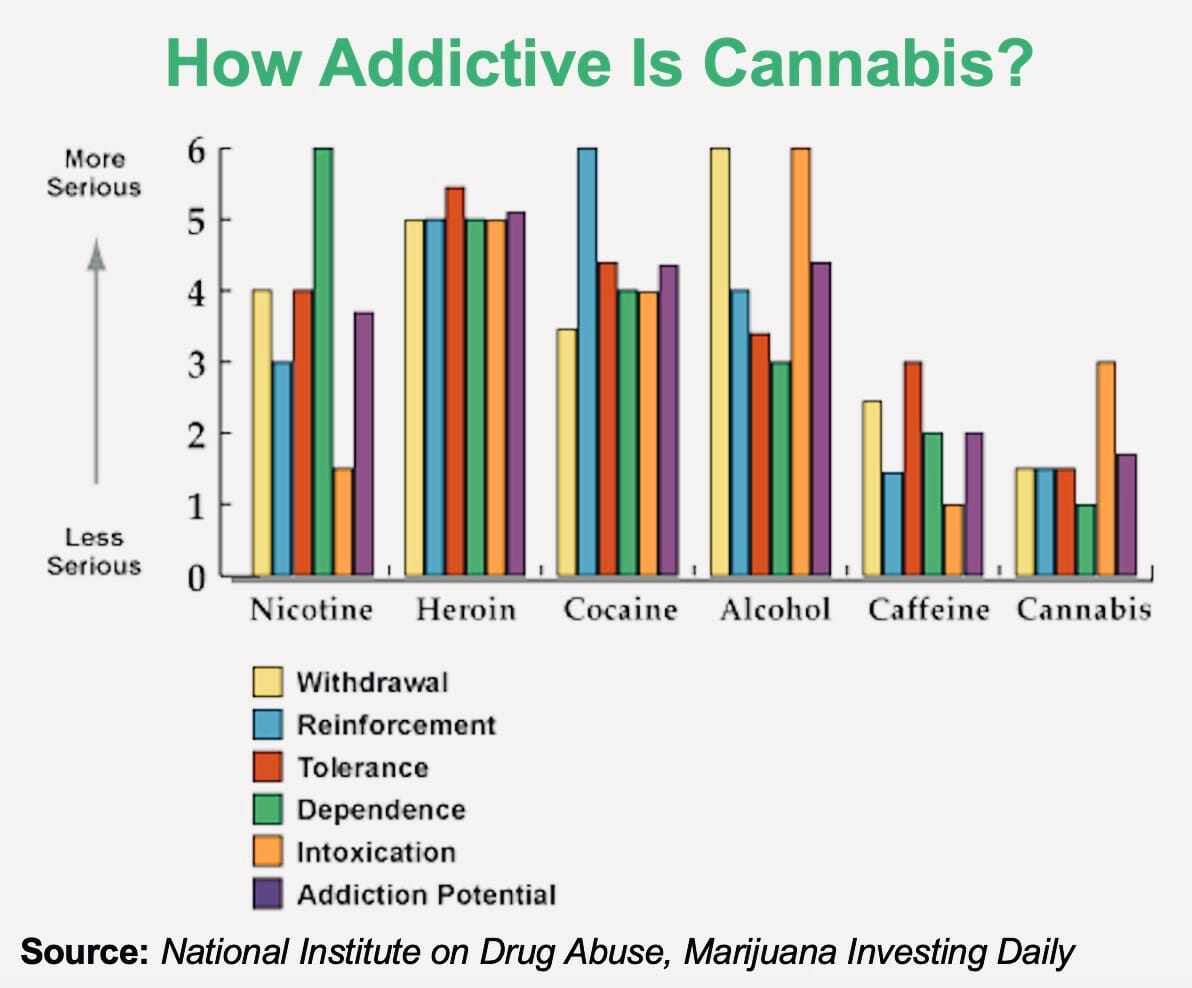 Most marijuana users do not end up using cocaine, heroin, or other illicit and much stronger substances, a fact that lessens the chances of a political backlash that could hurt marijuana investments.

Meanwhile, when it comes to more socially acceptable and prevalent substances, such as tobacco or alcohol, cannabis has proven to cause fewer dependency issues. The likelihood of developing an addiction to marijuana is nowhere near as likely as other federally controlled substances.

The National Institute on Drug Abuse states: “The majority of people who use marijuana do not go on to use other, ‘harder’ substances.” That’s Uncle Sam talking, not a local pot dealer.

In fact, marijuana is what’s known as an “exit drug” that helps fight the opioid crisis by offering an alternative, safer method of pain relief.

I’m not necessarily advocating for marijuana use. That’s not the purpose of this newsletter. I’m merely stating the facts. I don’t anticipate any “bombshell” medical evidence that could derail marijuana legalization and by extension clobber pot stocks.

In my view, the complete lifting of marijuana prohibition on the federal level in the U.S. is only a matter of time. When that happens, cannabis stocks will get their next big catalyst for an upward surge.

Indeed, the industry recently got a boost on the federal level, when the U.S. Food and Drug Administration (FDA) published an overview of the research and approval process for cannabis and the compounds derived from it (known as cannabinoids). This is a significant step that should pave a clearer regulatory path for medicinal marijuana companies.

The risks of penny stocks…

“Should I be wary of penny pot stocks?” — Ellen D.

The dilemma with marijuana plays is trying to determine which ones become lasting businesses. Many will simply vanish into the black hole of penny stock failures. Penny stocks are intrinsically risky.

Some penny pot stocks succeed, of course, but you must stick to quality. Marijuana remains an exciting investment opportunity, but the weakest companies are getting weeded out (pun intended).

“I’ve been reading a lot of stories about marijuana investing. So much of this coverage seems like hype and exaggeration! Is the cannabis industry really such a hot area for investors? I trust your judgment. I want to make money but I’m close to retirement and I can’t afford to make any mistakes.” — Matt S.

The legalization and subsequent commercialization of marijuana is an unstoppable trend and a once-in-a-generation chance to get onto the ground floor of an industry that’s becoming a juggernaut.

The right pot stock could turbocharge your portfolio. But you need to be selective and avoid risky penny stocks and fly-by-night players. Look for well-capitalized companies with actual products and earnings.

The Investing Daily team continually scours the landscape for inherently solid marijuana plays. In fact, we’ve unearthed a hidden gem in cannabis pharmaceutical research. This trailblazing marijuana biotech is on the verge of becoming “The Pfizer of Pot.” Click here for details.