War is a horrible thing. We should pray that one day, all countries beat their swords into plowshares. But if history is any guide, wars will continue to happen. And that’s why aerospace/defense is one of the most enduring investment themes you can find.

Congress this week approved an authorization bill that significantly boosts Pentagon spending. That spells long-term opportunity for growth investors. Aerospace/defense also provides a portfolio hedge, because it tends to be resistant to economic cycles.

Other areas of public policy are more volatile. The global tariff battle continues, with a new raft of U.S. tariffs against China set to take effect December 15.

Central banks, meanwhile, are striving to foster economic conditions that achieve both stable prices and maximum sustainable employment. They often find it difficult to strike the right balance.

The Federal Reserve yesterday decided to leave interest rates alone, which in my view was the correct action. Unemployment is at a 50-year low, the recovery continues (albeit in wobbly fashion), and retail sales should be strong this holiday season.

Over-stimulus would only come back to haunt us later. President Trump strenuously disagrees and has been lobbying for further stimulus, but you’d expect that from a politician who’s running for re-election.

The three main U.S. stock market indices all closed modestly higher yesterday. In pre-market futures trading this morning, the indices were poised for a flat opening as investors awaited news on the trade war.

Today, I want to focus on an unstoppable trend: the rise of military spending around the world. You should include defense stocks in your portfolio, especially in light of the many risks that currently bedevil the market.

Simply put, the Pentagon is a cash cow. Congressional negotiators on Tuesday agreed on a defense spending blueprint for 2020 that’s generous to the American war machine. The authorization bill is not the actual defense budget, but it guides lawmakers as they forge the details of a spending plan. The deal was announced in a conference report and press statement on Tuesday.

Overall, the blueprint authorizes funding for the Department of Defense and the national security programs of the Department of Energy. The report supports a top line discretionary budget of $738 billion, an increase of 7.5% from $686 billion in fiscal year 2019 (see chart). 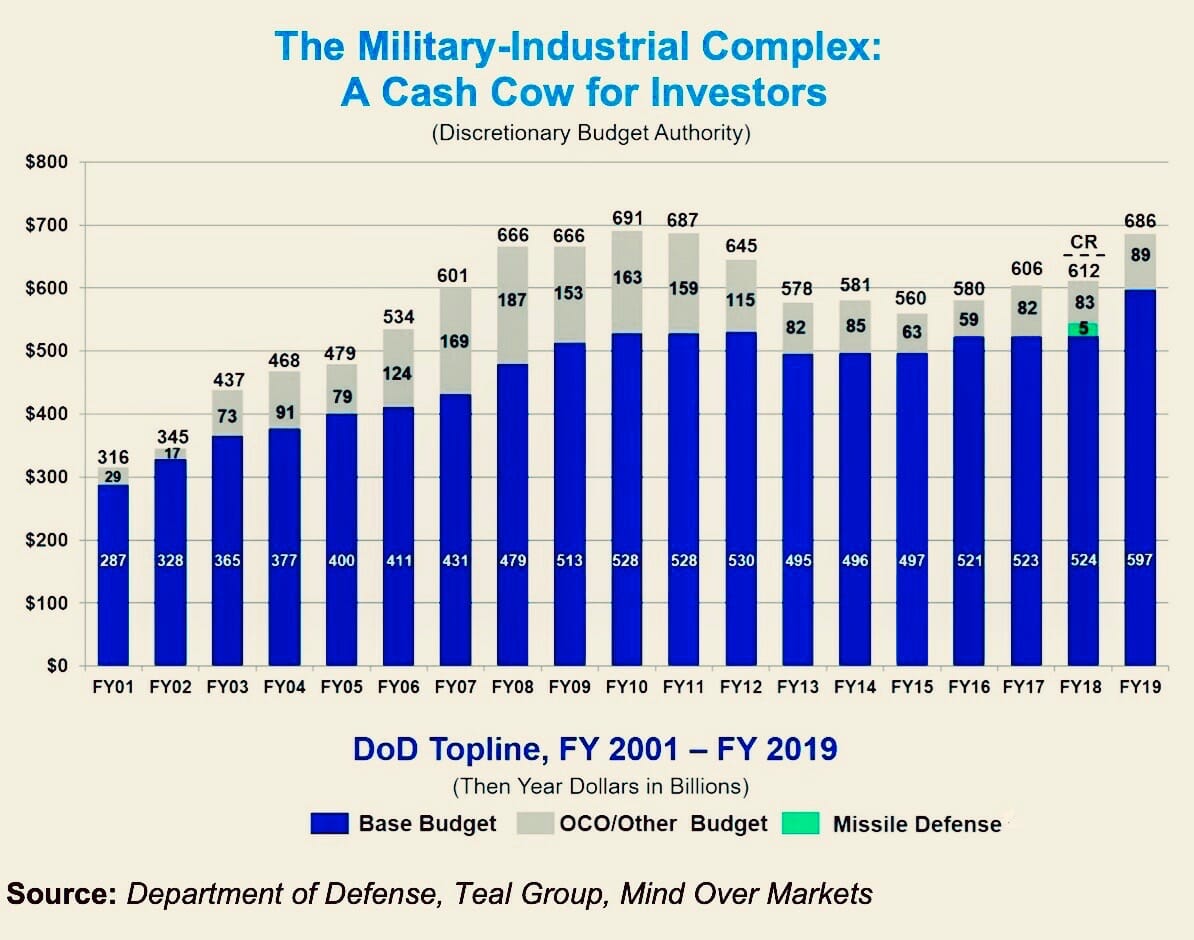 The 2020 blueprint also creates a sixth military branch, the U.S. Space Force. The authorization bill will soon go before the House and Senate for a vote.

So you thought the collapse of the Soviet Union in 1991 would usher in a new era of peace and harmony? Sorry to disappoint you. In 2018, global defense spending reached its highest level since the Cold War.

Military research firm IHS Jane’s estimates that worldwide defense spending in 2018 came in at $1.67 trillion, exceeding the previous post–Cold War record of $1.63 trillion that was set in 2010. The $1.67 trillion represents a 3.3% increase over 2017 levels, the highest year-over-year growth in more than a decade. When the books are closed, estimates call for a similar rise in spending for 2019.

As an investment analyst, I cover all sectors and asset classes, but my specialty is aerospace/defense. In my youth, as the editor of a publication devoted to rotorcraft, I flew military helicopters and got to know a lot of military officers and corporate CEOs in the sector. My experience over the decades tells me that military needs are largely impervious to economic ups and downs. Pentagon officials will never have to rattle a tin cup for funding.

Whether this defense spending is efficient, effective or even moral does not fall under the purview of this newsletter. As investors, we must take the world not as we want it to be, but as it is. Some investors refuse to put money into, say, tobacco stocks. So let your conscience be your guide.

But if you’re looking for market-beating growth, consider this: as of Wednesday’s market close, the benchmark iShares US Aerospace & Defense ETF (ITA) generated a year-to-date total return of 32%, compared to 27.2% for the SPDR S&P 500 ETF (SPY).

The stock market is poised for a fall. The recovery is due for a recession. You can play defense… with defense.

Sure, most analysts predicted a correction this year and it hasn’t happened. Not yet, anyway. The S&P 500 closed out Q3 with a gain of 1.2%, but the fourth quarter could still unravel, as the trade war drags on and political chaos consumes Washington. Don’t forget the harsh lessons of December 2018.

Corrections wreak havoc on your portfolio, whether they’re delayed or not. With increasing signs of recession, rising tensions in the Middle East, and the long-running U.S.-China trade war, you need to pinpoint trends that are resistant to these risks. Defense spending actually thrives on them.

The Persian Gulf is a “hot spot” and this week it got even hotter. The Trump administration yesterday announced the imposition of new sanctions on Iran’s biggest airline and shipping group, for aiding the Iranian regime’s proliferation of weapons of mass destruction.

Washington and Tehran have been rattling sabers for months and their heated rhetoric is boosting the chances of outright war. Oil-rich countries in the region are repeat customers for big ticket defense items, a trend that won’t stop in our lifetimes.

However, you shouldn’t pile into aerospace/defense indiscriminately. Many investors have assumed that military contractors as a whole are great “Trump plays” but you should focus on the fundamentals and inherent strengths of each stock.

As with any trend, aerospace/defense expansion will have its winners and losers. Investors are focusing on the leading mega-cap names in the sector, but don’t ignore the smaller innovators that are setting the stage for multiyear growth.

The blue-chip industry leaders already have enjoyed a big run-up in share prices; bargains are hard to find. That’s why you should consider the smaller-cap specialty companies that make the complex avionics, communications, electronics, and testing systems that the “big boys” can’t live without.

These pick-and-shovel plays fly under the radar, so to speak. They’re producing the breakthrough technologies for guidance systems, cockpit displays, pilot-less drones, hypersonic cruise missiles, and a host of technologies that are transforming the 21st century battlefield.

Along those lines, a technological niche with huge implications for national security is the global implementation of 5G, the “fifth generation” of wireless technology. Super-fast 5G provides the backbone for the Internet of Things.

Military 5G mobile networking capabilities will exert a huge influence on defense communications. The country that dominates 5G will obtain an edge in military competitiveness. The Chinese government is subsidizing 5G development. Uncle Sam is leaving 5G to the private sector. The race is on.

The opportunities for investors in 5G wireless networks are enormous. That’s why our team of strategists recently put together a special report on 5G investment plays. Click here for our 5G presentation.

John Persinos is the managing editor of Investing Daily. He also serves as an analyst with the aerospace/defense consulting firm the Teal Group. You can reach him at: mailbag@investingdaily.com