2020 Vision: The Investment Road From Here

Each year at this time, I publish a list of five predictions for the year to come. Two years ago, I got all but one of them right. This year, it may be the other way around. I’ll report back on how my expectations for this year panned out on Thursday after the year-end numbers are in.

In the meantime, below is my list of predictions for 2020. As always, each one must be both quantifiable and measurable so it can be objectively proven to be true or false. I may not always be right, but I’m not afraid to admit when I’m wrong. In honor of the year 2020, my first prediction will use that number as its basis.

During the third quarter, the economy grew by 2.1% as measured by gross domestic product (GDP). In November, inflation rose 0.3% and 2.1% for the past twelve months as measured by the consumer price index (CPI).

Over the course of 2020, I expect CPI to remain above 2% and GDP to fall below 2%. Unemployment is low and consumers are still spending. However, business investment is declining as measured by the ISM Purchasing Managers Index (PMI).

For the past four months, the PMI has been below 50. That means manufacturing activity is falling due to slowing sales overseas. It is unlikely that the trend will reverse as long as the U.S.-China trade war continues.

Single-Digit Growth in the S&P 500 Index

Generally speaking, election years tend to be better than average for the stock market. Since the Great Depression 90 years ago, only 4 of 23 election years posted negative results.

I’m not including this as one of my official predictions, but I also expect a stock market correction of at least 10% during 2020. That could happen as soon as February after most companies have reported their Q4 and year-end results.

The energy sector has taken a beating over the past three years. In 2017, it ranked second-worst of the 12 sectors that comprise the S&P 500 Index. In 2018 it finished dead last, and this year was once again second to last. 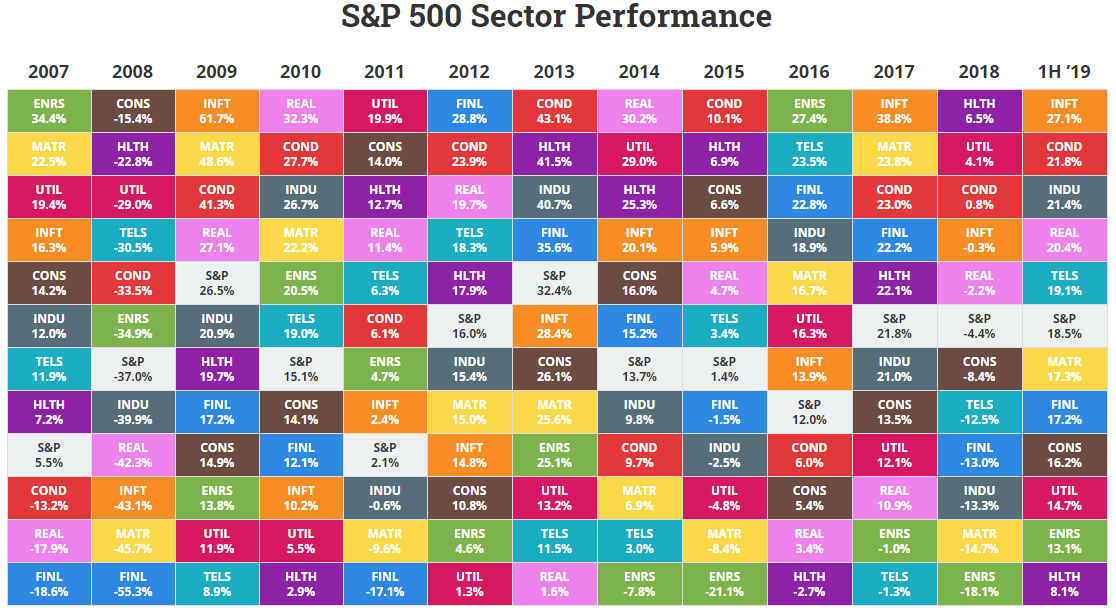 Meanwhile, tech stocks have been a tear for the past three years. In 2017 and for the first half of this year, information technology was the top-performing sector. A similar pattern occurred during 2013 – 2015. The following year, the energy sector soared to the top of the list while the tech sector finished in the bottom half.

For reasons I explained last week, I expect momentum stocks to come under selling pressure in 2020.

Read This Story: Four Overperforming Stocks to Sell in 2020

Tech stocks are especially at risk given their relatively high earnings multiples. At the same time, energy stocks have become oversold and likely to rally for the reason described below.

Crude Oil Will Trade Above $70/BBL

During 2019, the price of crude oil was remarkably consistent. As measured by West Texas Intermediate (WTI), a barrel of oil traded in the $50 – $60 per barrel range for most of the year. In 2020, I expect the price of oil to become more volatile and break above $70/bbl.

Saudi Arabia recently sold $25 billion of its state-owned oil business, Aramco, to outside investors. However, that deal valued Aramco at “only” $1.7 trillion. That’s 15% below the $2 trillion valuation the Saudis believe the business should be worth.

That means there will be pressure on the Saudis to raise oil prices, which they can do. A 15% rise in the price of oil would nudge it above $70 and should boost the value of Aramco to $2 trillion at the same time.

You don’t hear much about the cryptocurrency Bitcoin these days. Two years ago, it was all the rage. In December 2017, the price of a single Bitcoin peaked above $20,000 after starting the year below $1,000. 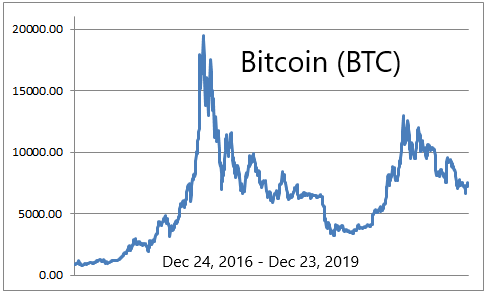 The initial allure of Bitcoin was in the security of the blockchain technology that made it virtually impossible to forge or steal. However, that myth was recently busted when a group of scammers dumped a large amount of stolen cryptocurrency on the market. It’s rumored that they have a lot more Bitcoin to sell, and plan to do it soon.

That’s how I see 2020 shaping up, but you may see it differently. Regardless of how you think it will go, now is the time to prepare accordingly.

One investing expert who can help you position your portfolio for the coming year is my colleague Jim Fink.

Jim has perfected certain trading secrets that made him wealthy. Now he wants to share those secrets with you. His proprietary “310F” trade is the most accurate way I’ve ever seen to double your stake in just three days… 321 out of 324 trades paid out over the past three years.

Want to learn about Jim’s next trades? Click here for details.