As 2019 draws to a close, readers have been asking me to make predictions for 2020. Year-end soothsaying is a tradition in any industry, not just finance.

With January around the corner, analysts are expected to lean back in their chairs, thoughtfully stroke their chins, and make sagely forecasts for the coming year.

But forecasting can be a tricky business. The best laid forecasts can be thrown into a cocked hat by surprises. Case in point: Donald Trump was supposed to lose the 2016 presidential election and if he somehow won, the stock market was supposed to tank. In reality, Trump eked out an Electoral College victory and stocks soared.

The coming months are sure to bring us a wild and woolly presidential campaign season, with unpredictable consequences for the markets. In our fraught era of drone strikes and nuclear missile launches, anything can happen.

Today is the last trading day of 2019, an opportune time to gaze into the crystal ball. Below are my snapshot predictions for major economic and financial trends in 2020, based on the hard data (and my informed intuition). Calibrate your portfolios accordingly.

U.S. and global economic growth. The bull market is likely to remain standing as the new year gets underway, girded by a confident consumer in a mood to spend. Retail sales broke records this holiday season, a promising portent for at least the early part of 2020.

Although in its late stage, the aging economic expansion is on track to continue in 2020, but at a slowing pace. Industrial activity is contracting in developed and developing countries alike, weighing on growth at home and abroad.

The chances of a full-blown recession in 2020 have lessened but growth will sputter in coming quarters, in large part because of the trade war. According to the consensus of analysts, we’ll see 2.3% annual growth in U.S. gross domestic product (GDP) in 2019 followed by an anemic 1.8% in 2020 (see chart). 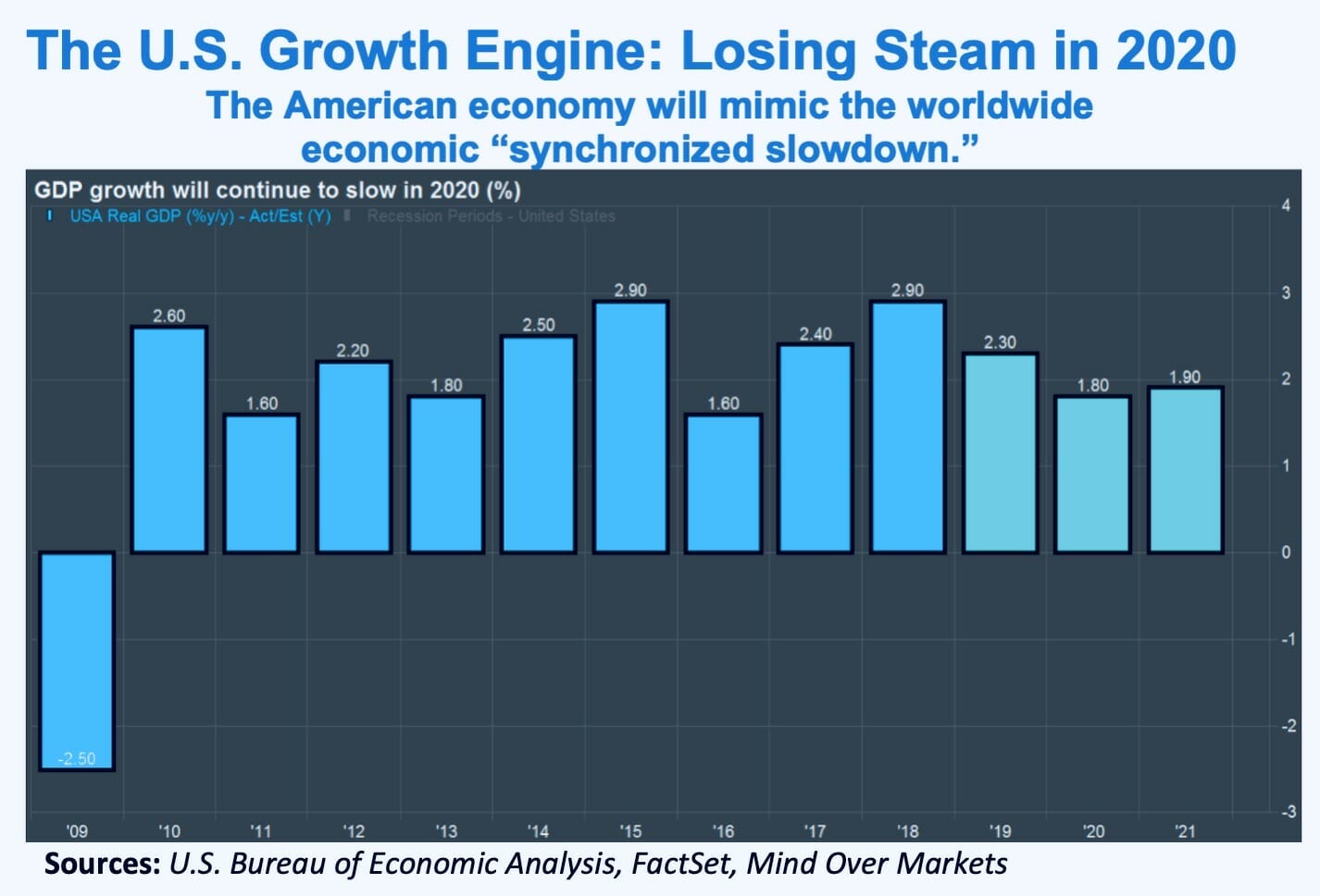 Global GDP growth slowed to about 3% in 2019, the worst performance in a decade. The International Monetary Fund expects that rate to reach 3.5% in 2020, an improvement but hardly gangbusters.

I don’t expect the trade war to end in 2020. The costs and uncertainties posed by tariffs will serve as major headwinds for global growth.

All eleven sectors are projected to report year-over-year growth in earnings. This estimated earnings performance for 2020 exceeds the earnings growth rate of 0.3% for CY 2019.

The tax cuts passed in 2017 no longer drive earnings growth, which means corporations will be more vulnerable to the global synchronized slowdown. Meanwhile, stock valuations remain relatively high. The disconnect between earnings growth and valuations is likely to trigger stock market sell-offs in coming months.

Interest Rates. For me, one of the biggest surprises of 2019 was how the Federal Reserve caved to political pressure and cut interest rates three times during the year, despite a healthy economic backdrop that didn’t warrant monetary loosening.

Central banks in Europe and Japan also adopted a dovish stance, all of which means that global stock market returns were given several shots of steroids in 2019.

The steroids will wear off in 2020, with further stimulus unlikely. Monetary easing drove risky assets higher in 2019, but now earnings and economic growth will need to drive returns.

Stocks. The table is set for further gains in stocks in 2020, but at a diminished trajectory.

Projections for the direction of the stock market in 2020 are all over the map, but the consensus seems to be muted gains in the area of 8% to 10%. Defensive sectors (e.g., dividend-paying utilities, consumer staples, and real estate) should continue beating the broader market, as investors rotate from momentum stocks toward value.

Bonds. Because we’re entering the year with ultra-low interest rates, bond investors will have to settle for modest returns in 2020.

Ten-year Treasury yields remain near record lows, which means there’s scant room for Treasury notes or investment-grade bonds to appreciate in price or to produce appealing levels of interest income.

The bullish case for investment-grade bonds going forward is a major recession, which doesn’t seem to be in the cards for 2020 (but that could change).

Crude oil. The energy sector is inherently volatile, so trying to precisely forecast the future price of crude oil is a fool’s game.

Oil prices bounced around in 2019 but eventually trended higher, as the chart shows. 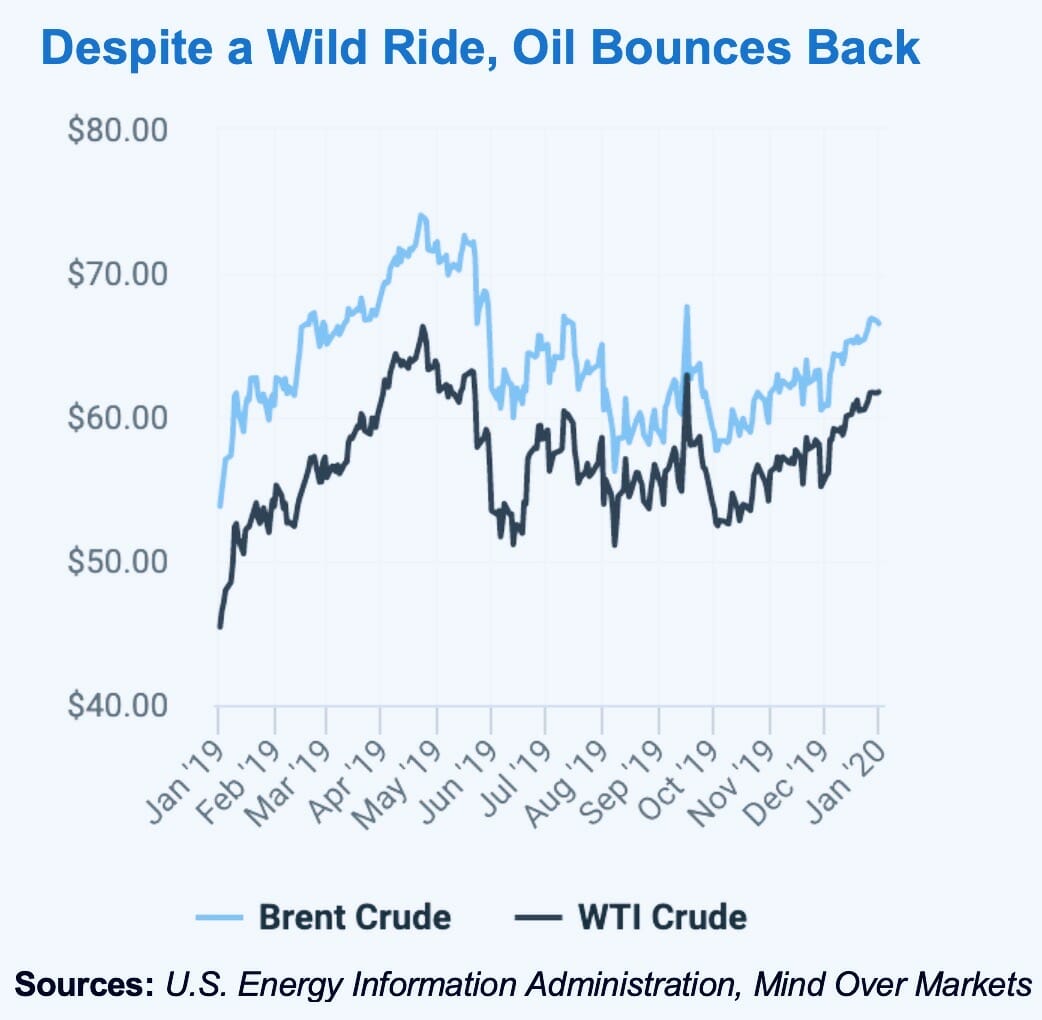 The recent resurgence in crude oil is largely due to OPEC’s production cuts, which have successfully stuck. But the forecast for oil next year isn’t rosy.

The U.S. Energy Information Administration predicts that oil prices should average around $55 per barrel next year. West Texas Intermediate (WTI), the U.S. benchmark, currently hovers at $62/bbl. Brent North Sea crude, on which international oils are based, stands at about $67/bbl.

Projected headwinds for crude in 2020 include growing production, a worsening glut, and slower economic growth. But then again, a geopolitical crisis (always a possibility) would cause crude oil prices to spike higher.

The U.S. dollar. The greenback is on track to remain strong relative to other currencies in 2020. Resilient U.S. growth combined with weakening activity in China should prevent a big decline in the greenback.

Emerging markets. Developing economies took it on the chin in 2019 but they should bounce back in 2020, due to persistently low crude oil prices and intact economic growth in the U.S. and European Union. However, the long-running trade war probably won’t end in 2020 and a resumption of tariffs could threaten an emerging market resurgence.

The bull run for the Midas metal is on pace to continue in 2020. Inflation pressures are mounting, which should prove a huge boost for gold prices through the coming year.

The current 2.1% inflation rate (as measured by the consumer price index) is the second-highest in the past five years, a level that’s forecast to move even higher as wages rise and tariffs (which are tantamount to taxes) take their toll.

Optimistic projections call for gold to reach about $1,600/oz in 2020, as not only inflation but geopolitical turmoil send investors fleeing to this classic safe haven.

So there you have it. I’m no Nostradamus, but the above assertions are reasonable based on existing conditions. Questions or comments about what to expect in 2020? Give me a shout: mailbag@investingdaily.com. In the meantime, Happy New Year.