Taking risks with the stock market is one thing, but driving on the roads on New Year’s Eve is one risk I refuse to take. As usual, the missus and I rang in the New Year by splitting a bottle of Champagne at home.

But rest assured, I raised a glass at midnight to toast the remarkable stock market rally of 2019. The big question now is whether the bull will live to see its 11th birthday in March.

Let’s face it, bull markets don’t last forever. Below, I’ll show you shrewd ways to position your portfolio for the new challenges ahead. 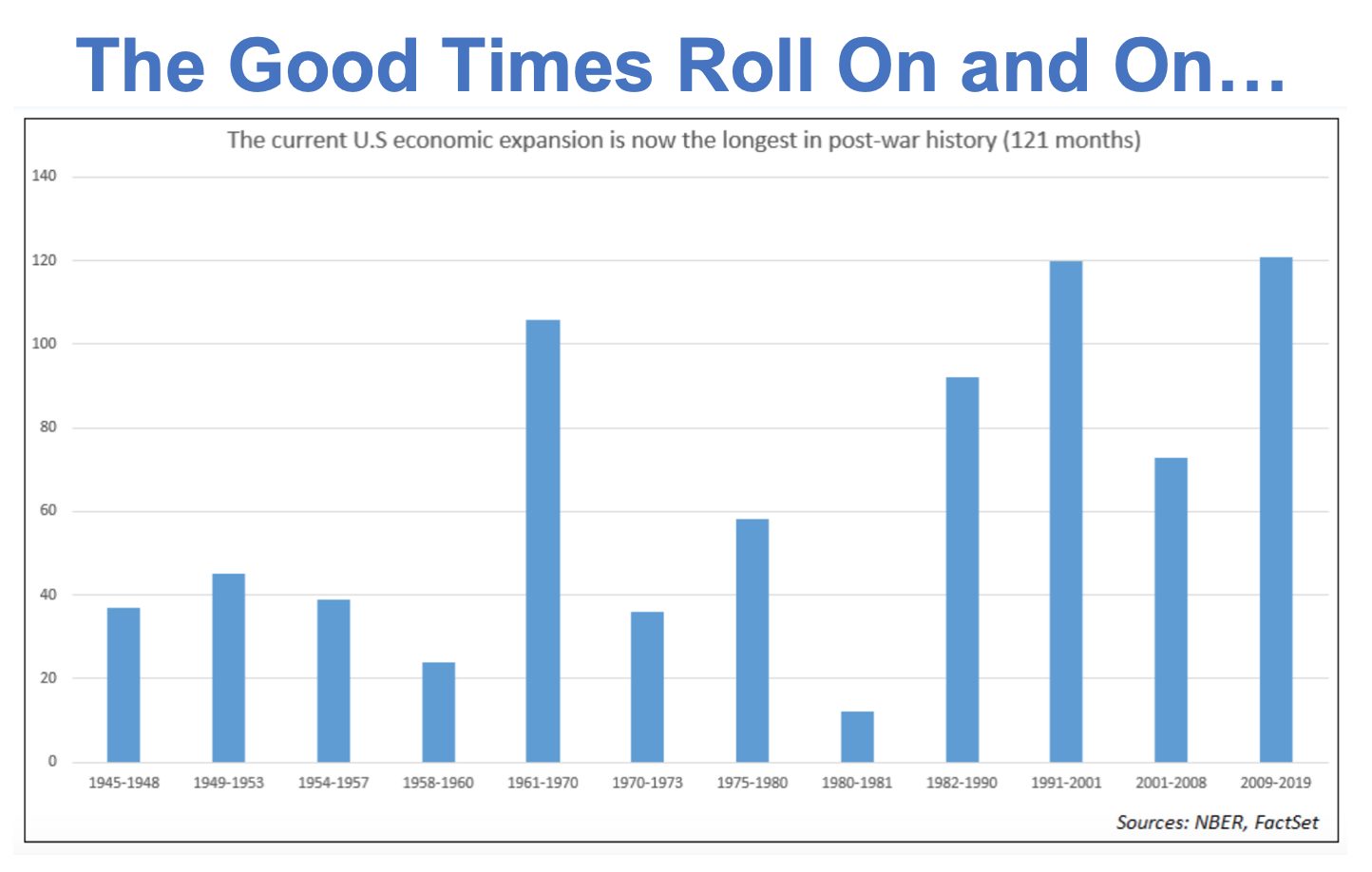 A major factor underpinning the stock market rally and economic growth in 2019 was the surprising dovishness of the Federal Reserve. Despite a healthy economy, the U.S. central bank bowed to political pressure and cut interest rates three times last year.

The rate cuts could pose problems down the road, by planting the seeds of inflation and limiting the Fed’s options when the recession finally hits. But investors shrugged off those concerns and continued to bid risk assets higher. The familiar mantra of “Don’t fight the Fed!” was proven true in 2019.

The Sino-American trade war remains a headwind for investors in 2020, but officials announced that a “phase one” trade deal between the U.S. and China would be signed January 15.

I’ve argued in previous columns that the phase one trade deal is mostly a public relations exercise to keep investors happy.

Sorry to be a spoilsport, but I’m compelled to point out that China has conceded nothing of substance in this ballyhooed phase one deal. Under the terms of the deal, the Chinese will buy agricultural products from the U.S. that they used to buy before the trade war started, in return for selling our country valued-added manufactured goods.

In other words, after a long period of damage from tariffs, we’re back to the status quo.

What’s more, the U.S. trade deficit with China has actually widened. But on Wall Street (and in life), perception affects reality. The pundits on financial television are reflexively applauding the phase one deal, like seals flapping their flippers.

The coming year should continue to reward stock market investors, but with lackluster gains more in the area of 8% to 10%. The presidential election campaign will add considerable uncertainty to markets. Don’t put all of your eggs in one basket and be sure to diversify across sectors.

Despite the compelling case to diversify, many investors hold portfolios with assets concentrated in relatively few holdings. This common failure has its roots in lack of knowledge and just plain laziness.

We’re currently witnessing a transition in the market from overvalued momentum stocks to underappreciated value plays, with a focus on sectors that perform well during the late stage of an economic recovery. Now’s the time to follow this trend. Appealing sectors for 2020 are utilities, consumer staples, real estate, and telecommunications.

In the turbulent election year ahead, you can expect investors to continue fleeing to the classic safe haven of gold.

Also keep an eye out for changes to Social Security. Because of the massive federal deficit, pressure is gathering on Capitol Hill to slash benefits.

The most discussed curtailment of Social Security involves raising the retirement dates for eligibility.

Under current law, the “early retirement” age of 62 is when you can begin collecting Social Security benefits. However, I strongly advise you to wait for “full retirement” age, if possible. If you start your retirement benefits at age 62, your monthly benefit amount is reduced by about 30%.

Experts estimate that benefits drop roughly 7% across the board for each year that the full retirement age is increased. Current proposals for raising the age brackets are all over the map. Another proposal under discussion in 2020 is to terminate or drastically reduce cost-of-living adjustments.

However, our researchers have found an under-the-radar method to boost your monthly Social Security benefits. It’s a little-known loophole that’s perfectly legitimate but you need to act before January 17, 2020. Click here for details.

So raise a glass to 2019. Savor your gains. But start taking defensive measures now. The party has to end sometime.