Amid High Valuations, Can Investors Hang On?

The stock market right now reminds me of Jimmy Stewart in the 1958 movie Vertigo, hanging onto a ledge for dear life. He’s okay, as long as he doesn’t look down.

Optimism over job growth and the “phase one” trade deal were the major factors driving stocks higher. Now the question is, how long can stocks retain their lofty perch without taking a steep fall?

On Friday, we got a taste of the market’s precariousness, suggesting that 2020 will witness considerable volatility.

The main culprit: A top Iranian leader was killed late Thursday in Baghdad by American airstrikes. The White House called the strikes a justified move to prevent terrorism, but Iran angrily vowed retaliation. As of this writing Friday morning, oil and gold prices were surging, on fears that Middle East conflict could get out of hand.

The latest saber rattling in the Persian Gulf region is an indication of how quickly Wall Street’s mood can change. In recent days, investors have expressed euphoria over economic and trade developments.

The U.S. Labor Department reported Thursday that initial claims for state unemployment benefits decreased 2,000 to a seasonally adjusted 222,000 for the week ended December 28. The consensus expectation was for 225,000 new claims last week. In November, claims were near a 50-year low.

Also yesterday, officials in Washington and Beijing reiterated that a limited trade deal will be signed on January 15.

In a positive sign for global growth, China’s central bank announced Wednesday that it would reduce the portion of deposits commercial banks are required to set aside as reserves. The move is designed to stimulate greater lending and in turn economic activity.

But with stocks hovering at unprecedented levels, perhaps it’s time to get concerned about sky-high valuations. Below, I’ll pinpoint a sector that currently boasts a slew of bargain-priced opportunities.

The CAPE ratio is defined as price divided by the average of 10 years of earnings (moving average), adjusted for inflation. The ratio currently stands at 31.23, which is 98.1% higher than the historical mean of 15.76.

According to this long-term chart of the CAPE ratio, stocks in the S&P 500 are partying like it’s 1929: 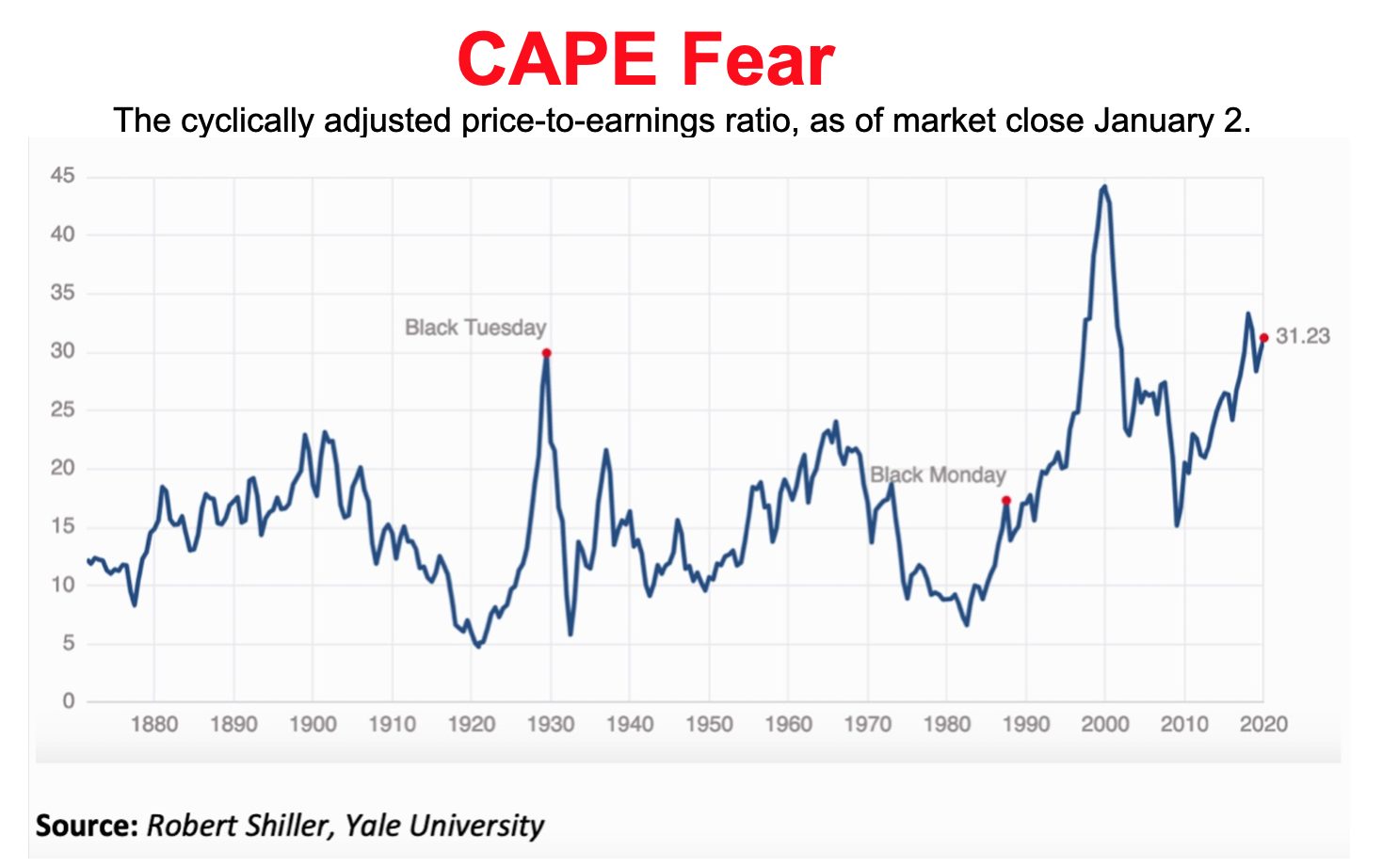 Another geopolitical headwind for 2020 is Brexit. Investor hopes have waxed and waned on the subject of Britain’s departure from the European Union, but fears are rising again that the UK will executive a “hard” departure without a deal in place.

British lawmakers last month approved Tory Prime Minister Boris Johnson’s Brexit plan, with a deadline of January 31 for the UK to leave the EU. However, several unknowns remain and the Continent’s business leaders and investors are getting nervous.

After winning a landslide election in December, the ardently pro-Brexit Johnson has a stronger hand to push aside any delays in leaving the trading bloc, whether a trade deal has been hammered out or not.

The consequences of a no-deal Brexit would be particularly grave for Europe’s financial services sector, which depends on a smooth-running London. Brexit’s toll on London, the banking hub of Europe, could spill over into the region.

Maybe there’s an investment message behind President Trump’s installation of gold curtains in the Oval Office. The yellow metal soared last year and it’s ascent probably will continue in 2020, as inflation starts to show signs of life and geopolitical uncertainty increases.

But the conditions that are favorable for gold will prove fatal for overvalued stocks that are looking for a trigger to tumble.

How should you trade in the days ahead? For starters, take partial profits from the highest gaining momentum stocks in your portfolio that are now overvalued. Also make sure you hold at least 5% to 10% in gold.

The yellow metal is proven protection against crises. During the Great Recession of 2007-09, the worst economic downturn since the 1930s, gold prices rallied from $840 per ounce at the end of 2007 to over $1,200/oz by the end of 2008, even though inflation over this period stayed in check.

In 2019, gold enjoyed its best run in nearly a decade. Gold prices currently hover at $1,548/oz. According to some projections, gold could soon surpass $1,600/oz.

The hunt for value…

If it survives that long, the bull market will turn 11 years old in March. The long upward march already is the longest bull market in history. I remain generally optimistic about stocks in 2020, but we’re long overdue for a correction.

One sector already has experienced a sharp selloff: cannabusiness. Last year, marijuana stocks witnessed a correction as many fundamentally weak (but overly hyped) pot companies finally encountered their day of reckoning. The shakier companies have fallen by the wayside, leaving the fittest to survive.

Many inherently solid marijuana companies are now on the bargain shelf. You should scoop them up, before renewed confidence in the sector pushes share prices higher. The landscape continues to favor marijuana legalization, a major tailwind for the industry in 2020 and beyond.

The pot industry shake-out in 2019 was brutal, but inevitable. However, quality marijuana stocks are positioned to soon bounce back, in a big way. To discover our favorite value plays in the pot industry, click here for a special report.