The Great Rally of 2019: A Sector Review

The rally in 2019 was broad-based. Every sector that makes up the Select Sector SPDR exchange-traded funds (ETFs) that represent the S&P 500 was up at least 20% for the year, except for one.

After closing out a magnificent year in the market, let’s dissect the 2019 performance, sector-by-sector. I’ll also provide insights on how you should position your portfolio for the rest of the year. 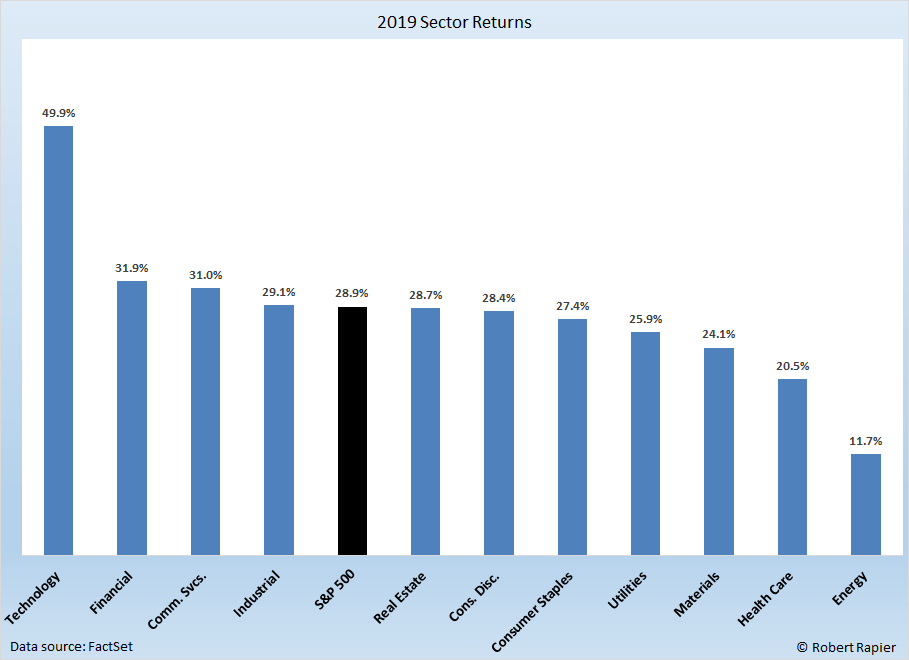 Technology was the biggest winner of 2019 with a gain of 49.9%. This sector includes technology hardware, storage, and peripherals; software; communications equipment; semiconductors and semiconductor equipment; IT services; and electronic equipment. Components of this ETF include Apple (NSDQ: AAPL), Microsoft (NSDQ: MSFT), and Intel (NSDQ: INTC).

The Industrials sector was strong all year, gaining 29.1% on the year. Component industries include aerospace and defense, building products, construction and engineering, electrical equipment, conglomerates, and machinery. Important constituents of this sector include Boeing (NYSE: BA), 3M (NYSE: MMM), and Honeywell (NYSE: HON).

The Real Estate Index, consisting primarily of real estate management and development companies and real estate investment trusts (REITs), was the only sector to decline in the fourth quarter. That dropped its return just below that of the S&P 500 to 28.7% on the year. Simon Property (NYSE: SPG) and American Tower (NYSE: AMT) are among the largest representatives of this group.

The Consumer Staples sector was next with a return of 27.4%. Making up this sector are companies involved in the development and production of consumer products that cover food and drug retailing, beverages, food products, tobacco, household products, and personal products. Component stocks include Proctor & Gamble (NYSE: PG), Philip Morris International (NYSE: PM), and Coca-Cola (NYSE: KO).

The Utilities sector was the top-performing sector in Q3, but weakened in Q4. It ended up with a return of 25.9%, albeit at much lower volatility than the broader market. Companies that produce, generate, transmit or distribute electricity or natural gas predominantly make up the Utilities sector. Component companies include NextEra Energy (NYSE: NEE), Duke Energy (NYSE: DUK), and Dominion (NYSE: D).

The Materials sector returned 24.1%. This sector includes companies that produce chemicals, construction materials, metals and mining, and paper and forest products. Among its largest components are DowDuPont (NYSE: DWDP) and Sherwin-Williams (NYSE: SHW).

The Health Care sector had been in last place headed into the fourth quarter. But it tied with the Technology sector for the best performance in Q4, notching a 14.2% quarterly return. That launched it out of last place and pushed the sector to a 2019 gain of 20.5%. Not bad for a sector that was in the single digits at the beginning of Q4.

The Energy sector had a strong Q1 and a decent Q4 (+5.5% return) to salvage the year. Nevertheless, the energy sector significantly underperformed all other sectors in 2019. Some of the energy sector’s biggest holdings are ExxonMobil (NYSE: XOM), Chevron (NYSE: CVX), ConocoPhillips (NYSE: COP), EOG Resources (NYSE: EOG), and Schlumberger (NYSE: SLB).

It will take a while for bearish sentiment in the energy sector to shift, but I believe it’s premature for investors to abandon oil-related opportunities. There were plenty of opportunities in the sector in 2019, if one knew where to look. That will also be the case in 2020.

If you attempt to time your investments according to the business cycle, the economy is still in the late-cycle stage, where economic growth rates start to slow as credit tightens. Recession typically follows the late-cycle phase, and some recession indicators continue to flash.

The consistent overperformers during the late-cycle are defensive and inflation-resistant sectors: energy, health care, and materials.

Paradoxically, these sectors underperformed the S&P 500 in 2019. They seem to be emerging as relatively better values given this recent underperformance and the present business cycle stage.

The utilities and consumer staples sectors generally outperform during the late business cycle, but they are also consistent outperformers during the recession phase that often follows. Of note, both sectors were ahead of the S&P 500 for most of the year, before the S&P 500 surged ahead during the second half of the year.

Editor’s Note: Robert Rapier has just provided an insightful round-up of sector performance in 2019. As 2020 gets underway, are you hungry for safe, market-beating gains in a volatile, risky world? Jim Fink can steer you toward the right opportunities.