The Persian Gulf region, never fully at peace, currently teeters at the precipice of all-out war. Iran is the flashpoint, yet again. Stocks are taking a beating.

When Wall Street gets nervous about the Middle East, it’s always about oil.

Stocks pulled back last week, in the wake of news Friday that an American airstrike had killed a high-ranking Iranian general. Iran is a major oil producer and a pivotal force in the strategically vital Persian Gulf.

In pre-market futures trading this morning, all three main U.S. stock market indices were poised to open deeply in the red. Safe haven assets were soaring.

Crude oil delivery routes in the Middle East could come under siege, a prospect that worries investors. As of this writing Monday morning, oil prices were spiking higher.

Stock market volatility is back, in a big way. Below, I’ll show investors how to cope.

Stocks are overvalued and ripe for a fall. Military confrontation in the Middle East is a potential trigger for a full-blown correction.

Last Thursday, which was the first trading day of 2020, U.S. stocks posted another record high. The new year appeared to be off to a great start.

But the following Friday, stocks reversed direction. The Dow Jones Industrial Average closed 233.92 points lower (-0.6%), its biggest one-day loss since early December. The S&P 500 also had its worst day in a month, falling 0.7%. The NASDAQ dropped 0.8%. At Friday’s open, the Dow briefly dropped more than 360 points. Investors fled risk assets in favor of gold, Treasurys and other safe havens.

Friday’s decline didn’t completely wipe out Thursday’s gains, but the sell-off was a wake-up call for investors.

Iran has vowed retaliation for the U.S. assassination of General Qasem Soleimani, who was the top ranking military leader in the Islamic republic. Citizens in Iran took to the streets this past weekend for massive anti-American protests.

Iran is a member of OPEC and continually jousts for influence within the region and the cartel. The threat of oil supply disruptions in the Persian Gulf pushed crude oil prices higher last week (see table). 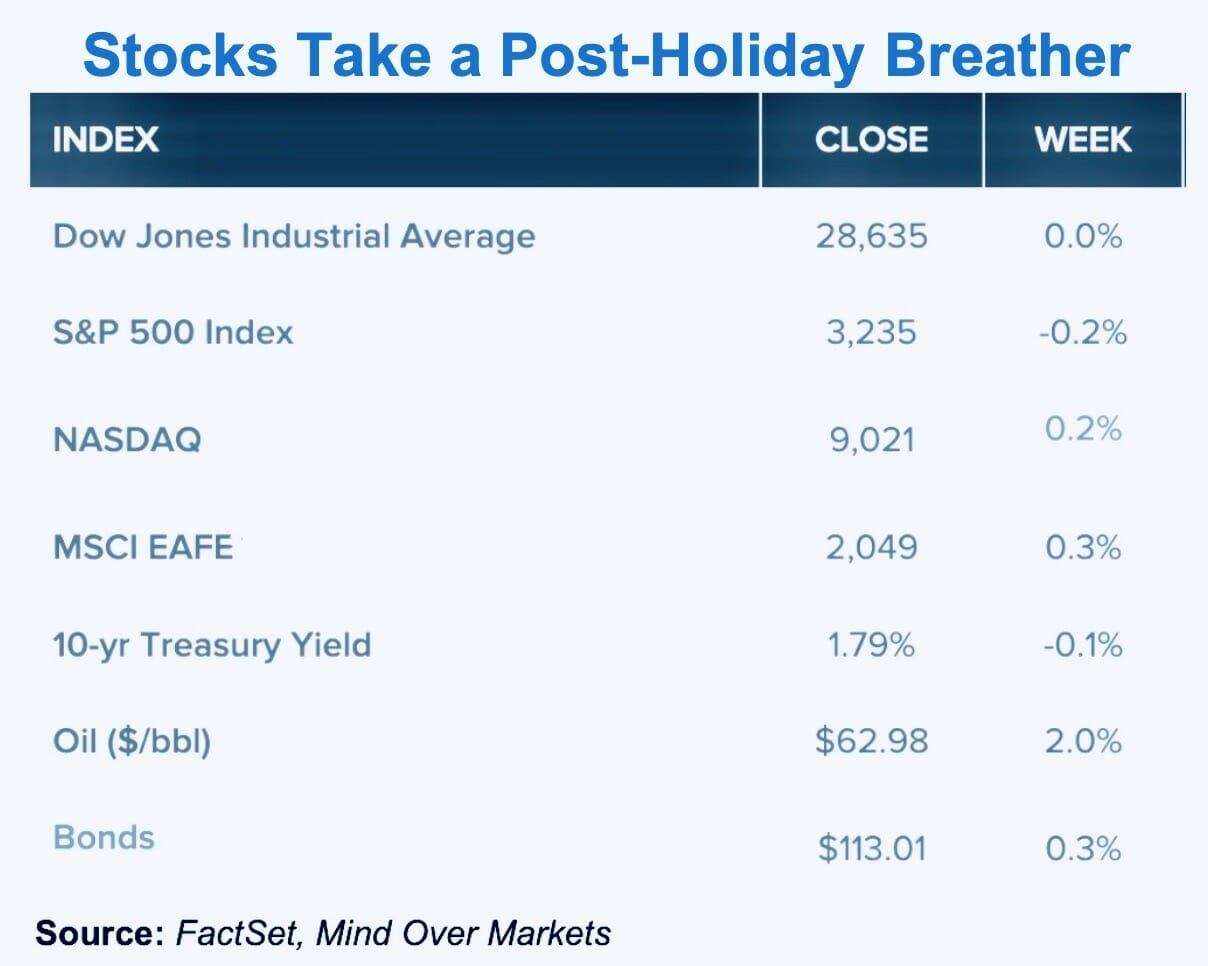 Since the 1979 Islamic revolution in Iran, the theocrats who run the country have been the sworn enemies of the United States. Iran announced yesterday that it was abandoning its 2015 deal with the West to curb the country’s nuclear ambitions. The U.S. pulled out of the deal in 2018.

The energy sector, as well as the broader stock market, underwent a bout of volatility in September 2019, when drone attacks temporarily knocked out major sections of Saudi Arabia’s oil processing infrastructure.

However, Saudi oil production quickly came back online and markets recovered. This time around, we might not be so lucky.

Now for the good news…

Despite the drama in the Gulf, the fundamentals are in place for further stock market gains in 2020. Barring a shooting war or terrorist attack, resilient economic growth should continue to buoy stocks.

But lower your expectations. Economic growth remains on track, yet signs are emerging that it’s slowing down. The same can be said for corporate earnings growth, which is in positive territory but only modestly.

What’s more, don’t expect the Federal Reserve to come to the rescue in 2020. The U.S. central bank capitulated to intense political pressure in 2019 to lower interest rates but that scenario is unlikely this year. Fed Chair Jerome Powell has made it clear that the Fed intends to stand pat into the foreseeable future.

Brace yourself for greater volatility ahead. The 2020 presidential election year is certain to be nasty and full of unpleasant surprises for investors. The U.S. airstrike last week is only a small taste of what might lie ahead.

Stick to your long-term goals. Scary headlines move markets, but their effects tend to be temporary. Under current conditions, a generally appropriate portfolio allocation is 50% stocks, 25% hedges, 15% cash, and 10% bonds.

Keep your eye on the consumer. The willingness of American shoppers to open wallets has been the mainstay of this bull market. With unemployment at historically low levels, wages rising, and U.S. gross domestic product growth in positive territory, the much-feared recession might be further delayed until 2021.

This Friday, we’re scheduled to receive the latest government data for the unemployment rate and average hourly earnings. Weak numbers could prompt the consumer to retrench.

Regardless, the Fed’s three rate cuts in 2019 will soon make themselves felt in the economy this year. The successful holiday shopping season will exert a delayed stimulus as well. Retail sales broke records in the November-December period, representing an influx of revenue and earnings for retailers that will show up in forthcoming quarterly operating results.

Turning up the juice…

Stimulus from overseas central banks continues to juice the world economy, which helps the economy here at home.

The People’s Bank of China last week announced that it would lower its reserve requirement ratio for all banks by half a percentage point, effective January 6, injecting more than 800 billion yuan ($114.9 billion) into the country’s financial system. The central bank’s move is designed to stimulate greater lending and in turn economic activity.

There’s ostensible good news on the trade front as well. Last week, Washington and Beijing announced that phase one of the U.S.-China trade deal would be signed on January 15.

Wall Street interprets phase one as a hopeful sign that the trade war is winding down. But I don’t buy it. As I’ve previously written, phase one entails glaring limitations that the mainstream press has chosen to ignore.

Read This Story: Can The Bulls Keep the Party Going in 2020?

You should remain wary of the consensus opinion on trade. Don’t get complacent about the damage from existing tariffs.

As the new year gets underway, be sure to re-balance your portfolio toward late-stage defensive sectors. In the latter stages of an economic expansion, which is where we find ourselves, the economic numbers tend to become mixed, which fuels volatility.

As I’ve explained above, you can expect greater geopolitical risk and market volatility in the months ahead.

Are you hungry for safe, market-beating gains in a volatile, risky world? Turn to Jim Fink, the chief investment strategist of Options for Income, Velocity Trader, and Jim Fink’s Inner Circle.

With Jim Fink’s trades, you can ignore the dire headlines. That’s because his proprietary trading method has been proven to generate profits in up and down markets. His recent string of market-beating winners has sent investors clamoring for access to his trades. To learn Jim’s trading secrets, click here now.

John Persinos is the managing editor or Investing Daily. You can reach him at: mailbag@investingdaily.com