Full Speed Ahead Towards a Better Retirement

My wife and I spent time over the holidays updating our financial records. She keeps track of all of our assets in what she grimly refers to as our “Executor Notebook.” In it, she records each asset’s year-end value, account number, and contact information for where it is held.

If nothing else, that process will one day make liquidating our estate upon our demise a bit less onerous for our children (hopefully, a long time from now). More importantly, it gives us a clear picture of exactly where we stand with respect to our financial goals as we approach retirement.

As you would expect, all of our stock market investments performed quite well in 2019. On average, the funds in my 401k account grew by about the same amount as the S&P 500 Index, which gained 29% last year. 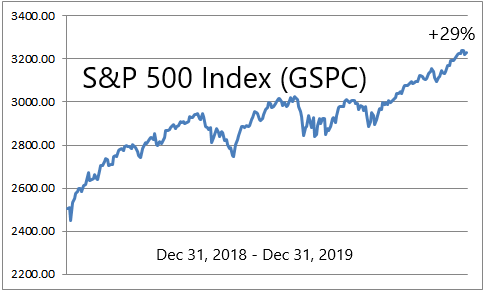 But what really caught my wife’s attention was the 50% gain in one of my IRA accounts. I have the bulk of my retirement money in a highly diversified portfolio of stocks and mutual funds. However, I keep a lesser amount in an IRA set aside solely for options trading. I mean, a guy is entitled to have a little fun before he dies, right?

The money in this account is set aside to one day buy a boat for me in retirement. Therefore, the faster it grows, the bigger the boat I will be able to buy. The boat I want costs about twice as much as the current value of this account. So, I have to make it grow fast!

Here is a quick rundown of my options trades in 2019 that is making that boat a lot bigger.

As previously reported, I doubled my money on International Business Machines (NYSE: IBM) last summer. When IBM dropped below $130 in October 2018, I recommended to my readers buying the $130 LEAP that expires next week (a LEAP is an option that expires in more than a year).

I liked that idea so much that I executed the trade in my own account. Turns out, I didn’t have to wait until now to cash in. By last summer IBM rallied above $150 and I was able to sell that LEAP for more than twice what I paid for it.

Since then, IBM has reversed course and opened this week below $134. If it falls below $130 again, I just may repeat that trade and see if I can double my money one more time.

Four months ago, I suggested buying a LEAP on Tata Motors (NYSE: TTM) after it bottomed out below $10. I reckoned that Chinese trade tariffs on vehicles made in America would benefit Tata, which is based in India.

That’s exactly what happened. Until this year, BMW manufactured six of the top 10 selling cars in China. Unfortunately for BMW, most of those cars are made in South Carolina. They are now 50% more expensive to buy in China than they were a year ago.

As a result, Tata’s sales in China have jumped and so has its share price. I sold a half-position two months ago for a 50% gain and still hold the other half of the position. I still have a year left on my option. By then, I may have more than doubled my money if the trade war goes on much longer!

Back in October, I identified five stocks that appeared oversold and likely to surge during the fourth quarter. Of those, I singled out Western Digital (NSDQ: WDC) as being the one that intrigued me the most.

A few weeks later, I bought a $50 LEAP on Western Digital for $10 when its share price dropped below $52. Earlier this week, WDC traded above $66 giving me a 90% gain on my option. I have not yet closed out this position. However, if WDC trades above $70 then I will most likely cash it out.

That could happen very soon. Western Digital is scheduled to release its fiscal 2020 second-quarter results later this month. If the company upgrades its sales guidance for the remainder of this year, its share price could quickly bob higher.

Unfortunately, not all of my trades have worked as well as those three. I have gains in LEAPs on General Electric (NYSE: GE) and Texas Instruments (NSDQ: TXN) that are offset by losses on Ford Motor (NYSE: F) and Himax Technologies (NSDQ: HIMX).

When I net out the gains and losses on all seven positions, I’m up a little over 50% over the past year. In addition, I’m still sitting on a pile of cash. I plan to put that money to work after companies begin reporting Q4 and year-end results later this month.

The key to buying LEAPs is being patient and waiting for a stock to get beaten down to a ridiculously low price. Then, I wait for a day when the overall stock market is also taking a drubbing and enter a limit order at a price that fits within my budget.

If my order doesn’t get filled, I don’t worry about it. The cost of rushing into an options trade at the wrong price can be very high. And now that I’m nearly halfway to having enough money to buy my boat, I don’t want to do anything that might sink my chances.

As successful as my options trading has been, I know someone who has done even better: my colleague Jim Fink.