The advertising slogan during the War on Drugs in the 1980s was: “Just say no.” It was originally championed by First Lady Nancy Reagan, who crusaded against illicit drug use. It became a cultural catchphrase.

I remember seeing the just-say-no public service ads on network television. Particularly striking were the ones starring a steely-eyed Clint Eastwood.

Drug laws and attitudes have loosened since the Eighties. But now bankers seem to have adopted Mrs. Reagan’s phrase, when marijuana companies come to them in search of loans.

The number of banks and credit unions that service the marijuana industry leveled off in the fourth quarter of 2019, according to new data from the Financial Crimes Enforcement Network (FinCEN). 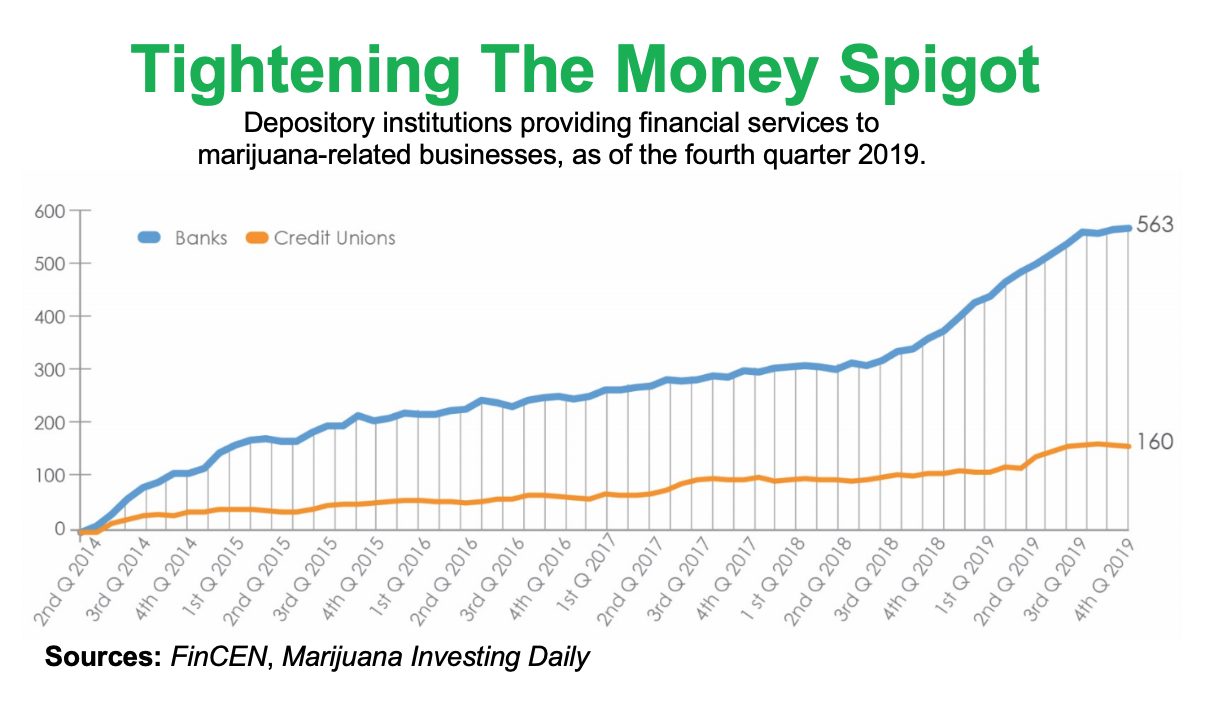 It’s not a dramatic downward trend but the dip is counter-intuitive, because the legal landscape has grown quite favorable for the marijuana industry. FinCEN reports that the decline in lending is on track to get worse in the first quarter of 2020.

So what gives? Below, I’ll explain the seeming contradiction. I’ll also explain why I’m still bullish on marijuana investing.

It started in the Golden State…

The “green rush” traces its origins to 1996, when the voters of California agreed to allow patients and their caregivers to possess and cultivate marijuana for therapeutic purposes.

Known as the California Compassionate Use Act, Proposition 215 created the country’s first open marijuana market and gave birth to the wave of state legalization laws (both medical and recreational) that have made possible a multi-billion-dollar industry that revolves entirely around a plant that has been used by civilization for thousands of years.

In a watershed moment for marijuana legalization, the U.S. House last September passed the Secure and Fair Enforcement (SAFE) Banking Act, which is designed to protect banks that accept marijuana business clients from being penalized by federal regulators.

The SAFE Banking Act still requires the approval of the U.S. Senate and President Trump to become law, but the trend is clear: hurdles to the “normalization” of marijuana are falling by the wayside.

Bankers are notoriously cautious, so perhaps they’re waiting for SAFE to officially become law. A possible stumbling block for passage is the fact that the Senate and White House are controlled by Republicans, who are less marijuana-friendly than the Democrats who control the House.

As financial lending levels off, many marijuana companies are having difficulty in executing their strategic plans for lack of cash.

Fewer and fewer marijuana companies have more than six months of cash when capital expenditures and cash flow burn are taken into account.

In 2019, consolidation blew through the marijuana industry, like a tornado in a trailer park. Merger and acquisition activity heated up, but not all of these marriages were wise. Many under-capitalized and poorly managed companies either went bankrupt or saw their share prices plummet. But this year, the industry is rebounding and in leaner, fitter shape. That’s good news, for bargain hunting investors.

I remain optimistic that the Senate will pass SAFE and President Trump will sign it. The GOP chair of the Senate Banking Committee has indicated that his panel will soon hold a vote on the legislation.

Investor concerns that social conservatives in the Republican party will initiate a new era of marijuana prohibition are overblown. States that have legalized or at least loosened restrictions on marijuana are increasingly dependent on the tax revenue, which is proving a bonanza for many cash-strapped fiscal coffers.

Despite sometimes harsh rhetoric from anti-marijuana lawmakers, legalization and commercialization of marijuana will roll on (so to speak). Mainstream consumer companies that are household names are forging alliances with fledgling pot outfits. At the end of the day, President Trump and his political party are pro-business…and marijuana is Big Business.

Marijuana also has become an entrenched business that would be difficult to uproot. A wide variety of companies are exploiting the trend toward marijuana legalization, not only by growing and selling pot but by creating medicines, branded edibles, tourist junkets, vaping parlors, paraphernalia, retail shops, seeds, fertilizers, trade shows, real estate investment trusts, exchange-traded funds… you name it.

If the Senate does advance the SAFE Banking Act this year and it’s enacted into law, you can expect a surge in bank lending to marijuana companies, which in turn will ignite a rally in pot stocks.

The time to buy quality marijuana stocks is ahead of SAFE’s passage, before this legal catalyst occurs and share prices zoom higher. For our report on the best marijuana opportunities, click here now.

John Persinos is the editor-in-chief of Marijuana Investing Daily. You can reach him at: mailbag@investingdaily.com.