My wife Carole is an emotional person who watches too much cable news. One night, while seeing the Iran crisis unfold on the tube, she turned to me and nervously asked: “Will this mess erupt into a global nuclear war?”

I calmly assured her it wouldn’t. (What else was I supposed to say?)

Sure enough, the apocalypse has been deferred. As U.S.-Iran tensions de-escalate, most of the risk-on sectors are regaining ground. Despite the drama unfolding in the Middle East this week, the stock market bulls are proving resilient.

But all eyes remain on the energy sector. The continuing risk of military conflict in the Persian Gulf has placed the oil and gas industry on center stage.

Read This Story: Crisis Investing: Cut Through The Fog of War

The limited, tit-for-tat military salvos in recent days between Iran and the U.S. show that the much-feared outbreak of World War III is unlikely. Iran is a master at asymmetrical warfare, whereby guerilla groups apply unconventional but effective tactics against a larger and better-equipped adversary. This military methodology decreases the chances of all-out conflagration, as traditionally envisioned during the Cold War.

That said, the Middle East is never at ease…and probably never will be. Below, I’ll look at energy market volatility and why it’s important for all investors. First, a quick stock market review.

In pre-market futures trading this morning, all three main U.S. stock market indices are poised to open higher, as investors continue to breathe a sigh of relief that nuclear Armageddon didn’t occur this week in the Middle East.

Technology stocks have been particularly strong, thanks to analyst upgrades for mega-cap tech leaders as well as optimistic projections for semiconductor demand in 2020.

Last year, chipmaker equities were clobbered by pessimistic expectations for the industry, but persistent economic growth and a lessening of the chip glut have changed those perceptions.

Automatic Data Processing’s (ADP) monthly survey of private-sector payrolls, released yesterday, showed that the numbers for December were much better than expected: 202,000 new private-sector jobs were created in the month, far exceeding the consensus expectation of 150,000.

In further good news, November’s meager 67,000 new jobs initially reported was doubled in ADP’s revision to 124,000. These numbers bring that month’s total closer to the blockbuster 266,000 reported by the U.S. Bureau of Labor Statistics (BLS) two days after last month’s ADP report. The ADP and BLS numbers tend to trend in tandem, when revisions are calculated.

Hydrocarbons and your portfolio…

Now, let’s turn to the star of the show, the energy sector. Crude oil prices this week have been wildly swinging on news from the Middle East. The following chart tells the story: 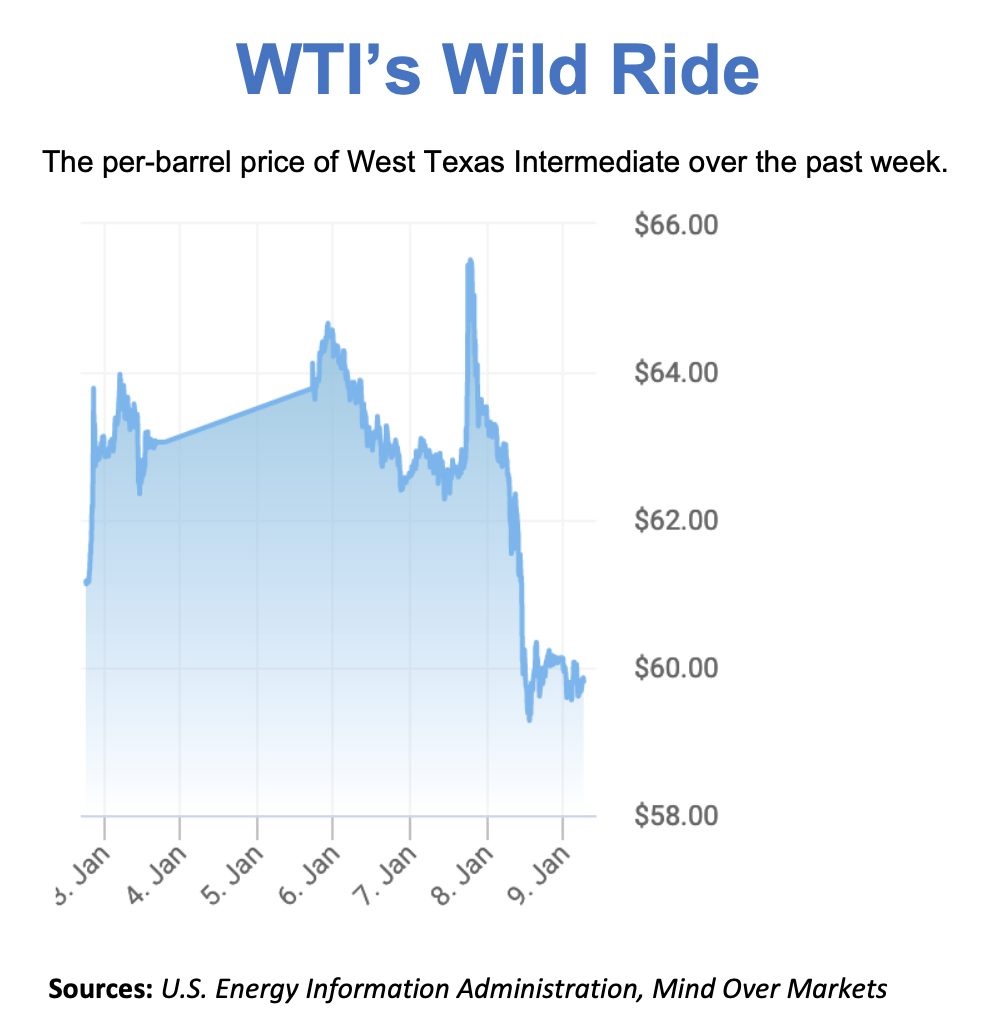 Oil price volatility has in turn driven intra-day volatility in the equity markets. Investors are continually left guessing as to which way the troubled and unpredictable energy sector will send stocks.

If your portfolio lacks energy sector exposure, why should you care about the oil and gas industry? Because we live in the Hydrocarbon Age.

The U.S. spends $1.4 trillion annually on energy, accounting for 8.2% of gross domestic product. In the U.S., the energy industry supports more than nine million jobs directly and indirectly, which is over 5% of the country’s total employment.

According to statistics from Goldman Sachs (NYSE: GS), the energy sector accounts for roughly one-third of S&P 500 capital expenditures and roughly 25% of combined capex and research and development spending.

Crude oil is the most valuation commodity in the world and that’s why the Middle East looms large in all of our lives.

Disaster in the shale industry…

When it comes to oil, analysts typically focus on global supply-and-demand and how the equation is affected by OPEC production cuts. But the U.S. shale industry is a highly disruptive force.

Once heralded as a miracle, the U.S. shale industry is on the brink of disaster.

According to Moody’s, U.S. shale drillers face $40 billion in debt that’s set to mature in 2020. And yet, declining shale production is weighing on their top and bottom lines. The industry is expected to encounter a wave of bankruptcies this year, a consequence of overproduction and excessive capital spending.

Balance sheets in the shale industry are loaded with debt but margins are shrinking. It’s the familiar boom-bust cycle and when oil goes bust, the broader stock market often suffers collateral damage.

The U.S. shale industry’s declining production puts upward pressure on oil prices, benefiting its main rivals OPEC and Russia. That said, concerns about sputtering global growth, combined with the existing glut, will continue to keep prices in check. We’ll probably see prices rise, but the days of $100 per barrel oil are long gone.

By Wall Street’s reckoning, rising oil and gas prices are a sign of health in the overall economy. All economic activity requires energy, whether to manufacture goods, operate machines, or provide transportation.

A crash in oil prices, combined with bankruptcies among shale producers, could trigger a broader stock market rout. On the list of risks to the bull market, add financial pressures in the U.S. energy patch.

The sort of oil price shocks we saw in the 1970s aren’t in the cards. Thanks in large part to the shale revolution, the world is awash with more oil than it needs. Investors don’t fret about shortages or “Peak Oil” anymore. But don’t get complacent.

The Middle East is a place of perpetual war, which should prompt perpetual vigilance on your part. The drone missiles could start flying again, without notice, on any given day. Equilibrium in the energy markets remains elusive.

For a list of low volatility stocks that will give you peace of mind, click here now.