Getting Back Into Bed Bath & Beyond

Few stocks have been more volatile over the past year than troubled retailer Bed Bath & Beyond (NSDQ: BBBY).

Below, I’ll show you how to handsomely profit from the stock’s gyrations.

BBBY traded above $18 last April before plunging below $8 in August. Over the next four months, it rallied above $17 only to fall below $14 last week. 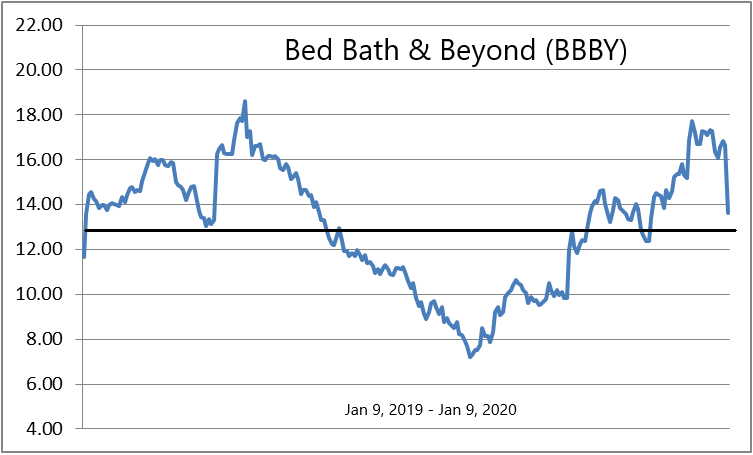 The culprit this time was a weaker than expected Q3 earnings report. The company recorded an adjusted net loss per diluted share of 31 cents and withdrew its financial guidance for the remainder of the year.

You don’t see that happen very often. Withdrawing guidance is an admission by the company’s senior management team that it can no longer accurately forecast profits.

From a longer-term perspective, BBBY has been one of the stock market’s poorest performers. Over the past five years, its share price has lost 80% of its value.

Over the same span, e-tailing giant Amazon.com (NSDQ: AMZN) appreciated 600%. Perhaps more so than any other bricks and mortar retailer, Wall Street regards Bed Bath & Beyond as being vulnerable to Amazon.

For that reason, short sellers are attacking the stock with a vengeance. Short interest in BBBY is nearly half of its float (shares trading in the open market), exerting substantial downward pressure on its share price.

In the short-term, no stock can withstand that much selling pressure without dropping in price. The question now is, how soon before BBBY bottoms out and the short sellers decide it is time to cash out?

Two Ways to Double Your Money

The last time I reviewed Bed Bath & Beyond was three months ago when it was trading near $12. I said then, “Even after its recent jump, Bed Bath & Beyond stock is still cheap. At a share price of $12, BBBY is back to where it was at the start of this year.”

I noted then that a $10 call option on BBBY that expires this month could be bought for $4. Two weeks ago, that same option could be sold for $8 for a 100% gain in just 10 weeks!

Alternatively, I also suggested selling a “naked put” on BBBY for which you would have received a premium of $2.50. If the stock closes above $10 when that option expires at the end of this week, the annualized return on “capital at risk” would also equate to roughly 100%.

Think about that for a minute. During a period of time when the stock increased 10% in value, you could have doubled your money. If you missed out on that trade, I believe there now is a similar opportunity to profit from the stock’s extreme volatility.

For the call option to become profitable, BBBY would have to rise above $14.50 over the next four months. For the naked put trade to pay off, BBY only needs to remain $12 during the span.

Let’s Do It Again

I think that’s likely to happen, and here’s why. Four months ago, Bed Bath & Beyond hired Mark Tritton as its new CEO. Previously, Tritton worked for Target (NYSE: TGT) as its Chief Merchandising Officer.

Similar to Bed Bath & Beyond, it wasn’t that long ago that Target was also feared to be a victim of Amazon. Over the past two years, Target’s share price has doubled as the moves made by Mr. Tritton paid off.

Tritton has reduced near-term expectations by withdrawing earnings guidance for this quarter. Now, he can shift Wall Street’s attention towards his long-term goals for the company.

That approach is paying off for Larry Culp, who took over as CEO at General Electric (NYSE: GE) in October 2018. Since bottoming out below $7 a few months after Fink’s arrival, shares of GE are up more than 50%.

I think something similar will happen to BBBY. As the chart above indicates, the stock has technical support near $13. That’s only a little below where it was trading last week. I expect the stock to dip down to that level later this month and then gradually recover as short selling pressure subsides.

Just as we do not know yet whether Culp’s efforts at turning around GE will succeed, it will take a year or longer to judge Tritton’s efforts at Bed Bath & Beyond. That’s why I do not advocate buying the stock but trading the options instead. That way, I only have to be correct about what will occur over the next few months and not the next several years.

Admittedly, that approach to scoring quick gains may be too aggressive for some investors. That’s where my colleague Jim Fink comes in.

Are you hungry for safe, market-beating gains in a volatile, risky world? Jim Fink can steer you toward the right opportunities.