In early trading Monday morning, the Dow Jones Industrial Average was again flirting with the milestone of 29,000.

The Dow last week briefly breached 29,000 for the first time in history before pulling back. As of this writing today, the index is re-testing 29K. Sorry to be a killjoy, but the real headline should be: Stock Index Hovers Near Arbitrary Round Number.

Human beings love round numbers. For investors, it’s a risky way of thinking.

Back when I was applying to college, some of my fellow students would retake the SAT because their first scores fell just shy of round numbers. In Major League Baseball, a .299 hitter will start swinging wildly during the final games of the season, desperate to hit .300. A used car with an odometer at, say 99,900, will see its value fall exponentially once the mileage hits 100,000.

In all such cases, the substantive differences are negligible. But social research shows that our brains are hard-wired to give disproportionate meaning to zeroes. It stems from our base-10 number system, an anthropomorphic decision that derives from the number of digits on our hands.

The same mental bias affects investing. Big, round numbers can cloud your judgement, tempting you to buy or sell at the wrong times.

When it comes to Dow 29K, keep your exuberance in check. The bull market seems on track for 2020, but this year’s gains aren’t likely to match the stellar performance of 2019.

Tensions between the U.S. and Iran de-escalated last week, relieving investors and propelling the main indices to close near new all-time highs. The price of crude oil continued its roller-coaster ride, closing out the week with a decline of 6.2%. Because of such factors as the U.S. shale revolution, our economy and financial markets are less vulnerable to oil shocks than they were several years ago.

The December jobs report showed a slowdown in job creation as well as wage growth, but it wasn’t as dire as feared. Payrolls rose by 145,000 in the month, strong enough to hold the unemployment rate at 3.5%, the lowest level in 50 years.

Year-over-year wage growth slowed slightly to 2.9%, but wages continue to grow faster than the inflation rate. The employment numbers are healthy enough to bolster consumer confidence and spending.

Much is riding on the American shopper. If purse strings start to tighten, stocks will probably falter. But for the time being, the “wealth effect” and by extension the bull market remain intact (see table). 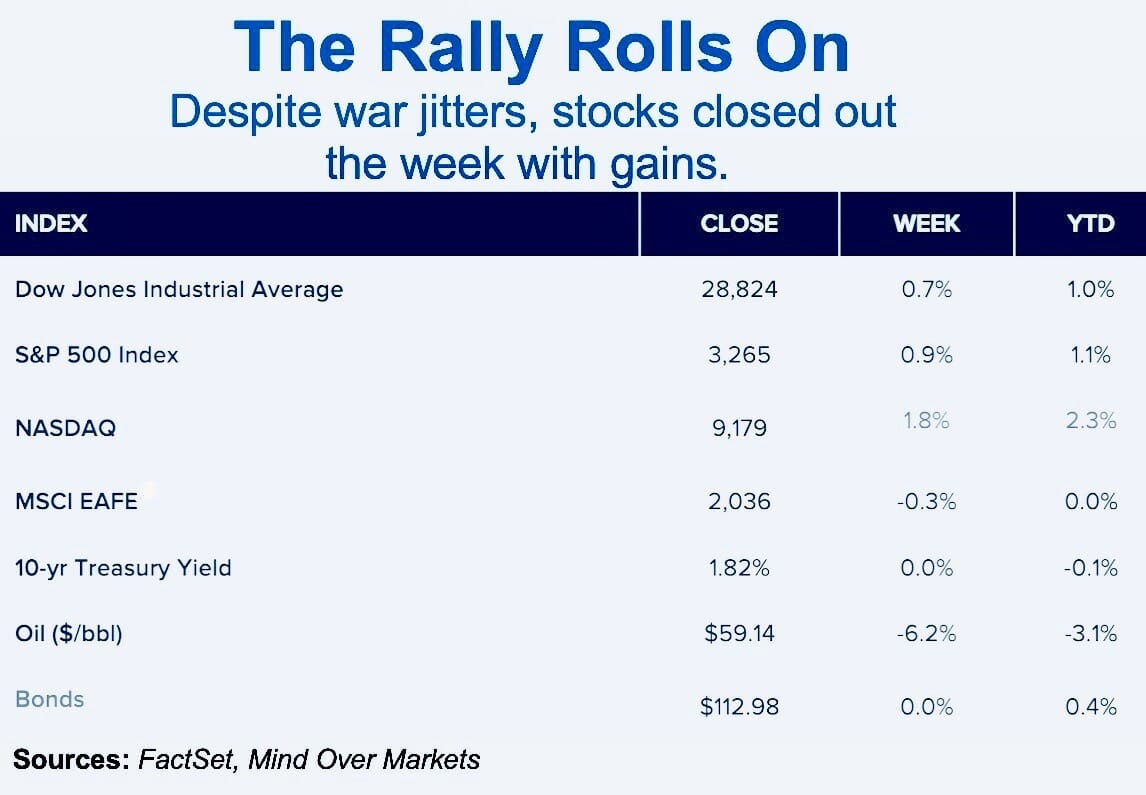 The technical picture is bullish. The Dow, S&P 500, and NASDAQ are above their rising 200-day moving averages. Short interest has decreased in recent days, despite uncertainty in the Middle East. The stars of the stock market rally over the past year have been mega-cap growth stocks, especially in the technology sector.

We’re enjoying the longest economic expansion in U.S. history, largely because of a “Goldilocks” scenario in which growth is neither too hot nor too cold. The Federal Reserve has had the elbow room to reduce interest rates, although monetary loosening is probably over for a while.

The economy is growing, corporate profits are slowing but still positive, and interest rates are low. The Santa Claus rally of year-end 2019 will be reflected on the top and bottom lines of retailers as first-quarter earnings numbers come in, a positive dynamic that will reverberate throughout the economy and financial markets.

So what’s not to like? Well, every bull market needs to take a breather from time to time. Correction triggers abound.

In addition to geopolitical risk, the U.S. presidential election this year will keep investors on edge. We’re just a tweet or headline away from a stock market swoon. But with proper diversification and proactive protective measures, you can build and preserve your wealth.

Read This Story: The 7 Rules For Safety, Income and Growth

As the first month of 2020 unfolds, the table is set this year for disappointment and overreaction. We face greater risks of sharp short-term sell-offs, due to high valuations and investor complacency.

In my view, investors are deluded about the trade war and the Middle East. The Sino-American tariff battle will probably continue right up to the November election and tensions with Iran could erupt again at any time.

The promised “phase one” trade deal remains up in the air. Officials indicated Sunday that the deal will get signed this week, but many details still need to be ironed out. Regardless, the deal is garnering criticism from non-partisan experts for being “hollow.”

Don’t predicate your investment strategy on temporary headlines, a milestone such as Dow 29K, or even a single calendar year. Take the long view. The prudent move now is to reduce your exposure to momentum stocks and rebalance toward defensive sectors and assets.

I also advise you to tap into unstoppable trends that will unfold far into the future, regardless of economic cycles or political surprises. One such trend is the roll-out of 5G, the “fifth generation” of wireless technology that provides faster and broader bandwidth than 4G.

One of the surest ways to make money is to invest in trends largely immune to headline risk. 5G is one such trend.

Always keep your eye on the economic hard data. In the week ahead, key reports scheduled for release include the producer price index (Wednesday), weekly jobless claims and retail sales (Thursday), and housing starts (Friday).

Housing starts are especially important. When the real estate market prospers and unemployment is low, as we’re seeing now, people feel wealthier. The steady rise in home prices since their collapse during the Great Recession of 2008-2009 has fueled consumer spending and in turn the bull market. Numbers on Friday that show weakness in the housing market could portend a recession and spook investors.

For the last four decades, every bull market has experienced a correction, which is simply a healthy restoration of equilibrium. With stock valuations now at excessive levels, you should welcome a correction. It’s hard to find value nowadays; a correction would put many appealing but overpriced stocks on the bargain shelf.

And what are we to make of those pictures of grinning traders on the floor of the NYSE, wearing “Dow 29K” ball caps? I consider the back-slapping mood to be a contrarian indicator.