Will Taxes Kill the Ganja Goose?

The Beatles’ 1966 song “Taxman” was a protest written by George Harrison. As the Fab Four started to make serious money, England’s highly progressive tax system was taking most of it away. I think of that song, every year around this time, when I sit down to do my taxes.

Another victim of the taxman? Marijuana (a substance with which The Beatles had a long and storied relationship).

State taxes on marijuana are going through the roof, which in turn is pushing up cannabis prices. This dynamic is proving a headwind for the marijuana industry, because it makes pot less affordable, dampens consumer demand, hurts company margins, and fuels a rising black market.

In their desperate search for revenue, state governments threaten to kill the ganja goose that’s been laying the golden eggs.

The following chart ranks the states that sport the highest sales tax rates on marijuana: 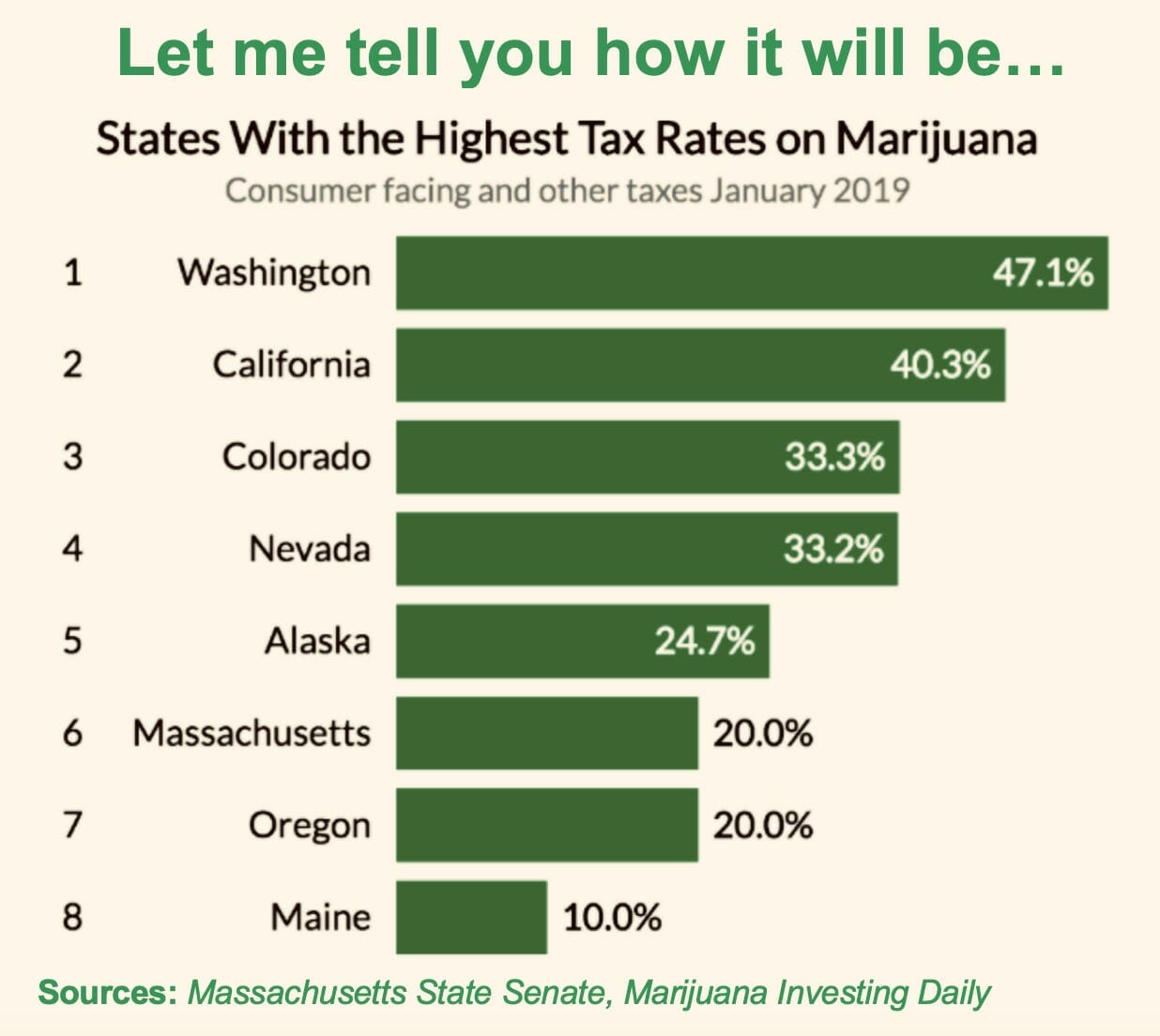 Sales tax rates only tell part of the story. Many states impose additional taxes and fees in tandem with their tax rates on consumer purchases.

For example, while Alaska doesn’t tax its cannabis purchases, it does charge growers $50 per ounce. Cannabis growers in Maine are charged anywhere between $94 and $325 per pound in addition to the 10% sales tax rate.

Add up the myriad state and local taxes on dispensaries, growers, and sales, and you get a more complete picture of the increasing tax burden on marijuana. It’s hard enough for marijuana companies to generate healthy profit margins, especially as cannabis becomes more of a commodity. High taxes can push a marijuana company into the red.

California is especially aggressive in its attempts to squeeze money from weed. The California Legislative Analyst’s Office recently released several reports on marijuana tax issues, including a recommendation that cannabis be taxed by potency instead of weight. Taxing via potency would greatly boost the revenue potential.

But some officials in the Golden State are sounding the alarm. The state’s Cannabis Advisory Committee recently warned Gov. Gavin Newsom (D) and the California Assembly that onerous taxes are hampering the marijuana industry.

However, there’s good news for marijuana companies that are getting squeezed by taxes. They’re about to get much easier access to capital.

The U.S. House last September passed the Secure and Fair Enforcement (SAFE) Banking Act, which is designed to expedite the access of pot companies to bank lending. The bill’s chances of becoming law are promising.

Lawmakers are exhorting their colleagues to pass the bill. On January 13, Rep. Ed Perlmutter (D-CO) tweeted: “There is an urgent public safety risk facing the majority of communities & Americans today that needs to be resolved. The #SAFEBankingAct passed the House in September & I urge the Senate to do the same so we can protect businesses, employees & communities.”

SAFE’s passage into law would provide the catalyst for a spike in marijuana stock prices. Proactive investors would reap a windfall. For our report on the best-positioned marijuana stocks, click here now.

In another positive development, lawmakers in California and other high-tax states have vowed to put forth ballot measures in 2020 that would lower taxes and ease regulations on marijuana.

California Governor Newsom last week released a budget proposal that seeks to consolidate marijuana business licenses under a new agency called the Department of Cannabis Control. The goal is to streamline the granting of licenses, to undercut the state’s black market. California is currently plagued by a huge backlog of applications.

I perceive a silver lining to high tax rates on cannabis. As state officials get addicted to the tax revenue from marijuana, they’re increasingly averse to any political backlash that could impede the industry. Socially conservative groups that seek to roll back marijuana legalization are forced to contend with politicians who relish the tax money from pot.

Despite the tough-sounding rhetoric from marijuana prohibitionists, at the end of the day both political parties are pro-business, especially the GOP-controlled White House and Senate. To cite another Beatles song: “Give me money. That’s what I want.”

Questions about marijuana taxes and how they affect pot stocks? Drop me a line: mailbag@investingdaily.com