Once again, beleaguered banking giant Wells Fargo (NYSE: WFC) is in the news. On January 14, the megabank released Q4 results that disappointed the market.

Notably, the company reported an operating loss of $1.9 billion. Of that amount, $1.5 billion was for “litigation accruals” related to the bank’s bogus account scandal.

As a result, Wells Fargo recorded earnings per share (EPS) of only 60 cents for the quarter. That’s less than half the $1.21 of EPS for the same quarter in the prior year.

Even without the 33 cents deduction for legal costs, EPS still would have come in well below the $1.12 estimate. Simply put, it was a bad quarter no matter how you look at it.

As a result, shares of WFC fell more than 4% that day on heavy volume. That was after having already fallen 6% in the weeks leading up to the announcement. 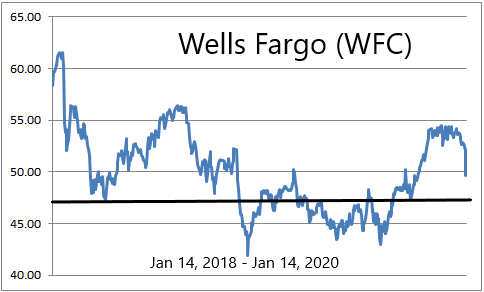 At a share price of $50, Wells Fargo is right back to where it was a year ago and 30% below its peak price near $65 achieved two years ago. This latest setback has many investors wondering if it’s time to give up on Wells Fargo.

I don’t think so. I have followed Wells Fargo closely since I sold it out of the PF Growth Portfolio two years ago. I believed then that it would take a couple of years for the bank to fully rid itself of the structural defects that led to its downfall.

Since then, the bank has engaged in an aggressive campaign to correct those problems. However, it wasn’t until a few months ago that the company finally appointed a new CEO. On October 21, Charles Scharf assumed the helm of Wells Fargo after similar stints at Visa (NYSE: V) and BNY Mellon (NYSE: BK).

A Better Way to Profit

When I last reviewed Wells Fargo five months ago, it was trading near $45. I stated then that “I now believe Wells Fargo is close to bottoming out.” Even after this week’s big drop, WFC is still up 10% since then.

At that time, I noted that a better way to profit from Wells Fargo’s turnaround was to sell a “naked put” rather than simply buy the stock. That means selling a put option on the stock now and buying it back later to close out the trade.

Put options increase in value when the price of the underlying stock goes down. When investors fear that a stock may be about to take a dive, the cost of the premium to buy a put option on it rises.

Back in August, you could have sold a put option on WFC that expired last month at a strike price of $42.50 for a premium of $1.60. Since WFC never fell below the strike price, that option expired worthless and the premium was yours to keep.

If WFC had fallen below $42.50 by the option’s expiration date, you would have had to buy it at that price. That would have been a wonderful price at which to own WFC, so either way that trade was going to be a winner.

There’s an opportunity now to make a similar trade on WFC. Investor sentiment is overwhelmingly negative and put option premiums are soaring.

If you’re looking for bigger returns than that, buying a call option on WFC may be the way to go. A call option with the same $47.50 strike price expiring in June could be bought for $3.50 a few days ago.

That puts the breakeven price for this trade at $51, less than $2 above where WFC was trading at the time. If WFC rises to $55 by the time this option expires in June, you will have doubled your money.

Of course, there is no assurance that WFC will not continue falling. If that happens, the call option could expire worthless and you would be out all of your money.

However, if you sell the put option, you still have that premium to keep and you would own WFC at a price of $47.50.

In that case, it should be only a matter of time until you can sell the stock for a profit. Now that the bank has written off the bulk of its legal costs, the next several quarters should compare quite favorably to the most recent one.

If you’re not convinced that Wells Fargo’s worst days are behind it, there are other ways to profit from the stock market’s inherent volatility. Turn to our colleague, Jim Fink.

Jim Fink’s proprietary trading methods adroitly leverage volatility, for explosive gains. Over the past 50 months, Jim’s trades have racked up a “win rate” of 84.68%. That’s unheard of for most investors, in any asset class.