As folk singer (and Nobel Laureate) Bob Dylan sang in his iconic 1965 song, Subterranean Homesick Blues: “You don’t need a weatherman, to know which way the wind blows.” And if you’re an investor, you know that the wind is definitely blowing in the direction of marijuana legalization.

But at the same time, the wind propelling the marijuana industry is given to sudden shifts and crosscurrents. If you want to make money in marijuana, you need to stay abreast of legal trends.

Let’s look at the most recent marijuana news, on the federal and state levels.

A new bill filed by House Agriculture Committee Chairman Collin Peterson (D-MN) and bipartisan cosponsors would compel the Food and Drug Administration (FDA) to allow the marketing of cannabidiol (CBD) as a dietary supplement.

Filed January 13, the bill would amend the Federal Food, Drug and Cosmetic Act to include CBD in the FDA’s definition of dietary supplements.

Chicago-based Cresco started selling recreational marijuana on January 1 in Illinois, the first day it became legal to do so in the Land of Lincoln. Cresco currently operates more than 700 dispensaries in 11 states.

Sen. Tammy Duckworth (D-IL) tweeted: “I had a great meeting this weekend with @LtGovStratton, @toihutchinson & other local leaders on how Illinois is working to make legalization of recreational cannabis equitable for all. I’ll keep working with them to make sure equity & justice are at the forefront of this process.”

U.S. Customs and Border Protection’s Great Lakes Region office tweeted: “#TravelAdvisory All travelers are prohibited from possessing marijuana when crossing the border. If caught you may be subject to seizure, fines, arrest, or in the case of aliens, denial of admission into the U.S.”

Rep. Denver Riggleman (R-VA) tweeted: “I am proud to co-sponsor @RepAlexMooney’s 2nd Amendment Protection Act which allows law-abiding citizens to keep and bear arms as they legally use medical marijuana in their home state. Use of medical marijuana should not infringe on 2A rights.”

Rep. Hakeem Jeffries (D-NY) tweeted, “The war on drugs has been a spectacular failure. Families have been broken up and communities decimated. It’s time to decriminalize marijuana and #EndMassIncarceration. NOW.”

Rep. Barbara Lee (D-CA) tweeted, “Congress must pass my Veterans Medical Marijuana Safe Harbor Act to provide protection for veterans and their doctors in using medical marijuana where it’s legal. It’s past time we acknowledged the benefits of marijuana to help our struggling veterans heal.”

U.S. House legislation to require the Department of Veterans Affairs to study marijuana as a way to medically treat veterans received four new cosponsors for a total of 101.

Colorado lawmakers introduced legislation to protect workers from being fired for using marijuana on their own time.

Effective January 1, a new law in Colorado allows for the commercial delivery of marijuana. It began with medical marijuana for 2020, with recreational pot following a year later.

Also taking effect January 1 in Colorado was another law that allows two new types of marijuana-related businesses in the state. Businesses can apply to be licensed as a tasting room that can sell cannabis products onsite. The law also allows for “marijuana hospitality establishments,” which facilitate onsite consumption of marijuana, but the not sale of it.

Colorado is a huge and growing marijuana market. When the final numbers are tabulated for 2019, Colorado’s state tax revenue from marijuana is expected to surpass $300 million per year. Cumulatively, since 2014, the total exceeds $1 billion (see chart). 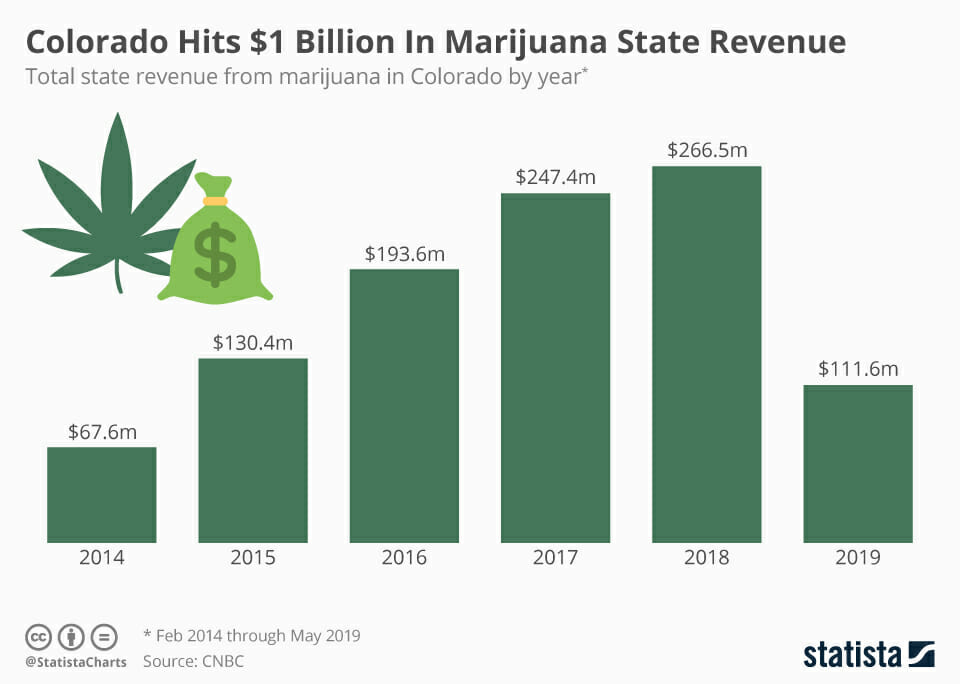 Pot prohibitionists have not thrown in the towel. Case in point: The U.S. Attorney for the District of Utah recently said he’s worried that marijuana legalization will “bring down our society.”

Illinois regulators posted the application for social equity cannabis business development fund loans. They also announced areas across the state that are eligible for Restore, Reinvest and Renew Program grant funding designed to invest in communities that have been disproportionately harmed by the war on drugs.

Illinois Gov. J.B. Pritzker (D) this year pardoned more than 11,000 people for past marijuana records. According to the American Civil Liberties Union, marijuana arrests account for more than half of all drug arrests in the U.S.

A Maine representative filed a resolution calling on the federal government to increase marijuana businesses’ access to banks and insurance coverage.

Texas’s agriculture commissioner will host a public hearing on proposed hemp rules on January 22. Hemp is now legal in the U.S., thanks to passage of the 2018 Farm Bill.

Michigan regulators will hold a public hearing about proposed marijuana rules on February 12.

The Investing Daily team continually scours the landscape for intrinsically sound marijuana stocks that are poised for outsized gains. For our team’s latest research on the best cannabis investments, click here now.