Why You Should Not Ignore Commodities

The Consumer Price Index, or CPI, is a commonly used measure of inflation. Last year, the CPI reading was 2.3%.

But I think the CPI is misleading. It underweights commodities and therefore fails to account for the impact rising commodity prices have on consumers. Below, I examine the investment opportunities in this often ignored dynamic.

Virtually all of life’s essentials – heating, gasoline, food – have a commodity component. Dollars spent on such essentials are dollars that can’t be spent on other goods, which are the goods that on balance get higher weightings in calculating the CPI.

In other words, a plausible way to understand today’s low inflation figure is to see it as largely reflecting the diminished purchasing power most consumers now have to buy products whose commodity component is relatively small.

Before 2002, commodity prices stayed tame, which was great for U.S. consumers and the economy. After 2002, when China joined the World Trade Organization, commodity prices have been stronger than most realize.

Commodities have become a negative factor, a burden for the developed world in general, including us. Even the extreme inequalities that have worsened this century can be traced at least indirectly to the role of commodities.

You might ask why the rising trajectory of commodities this century has largely escaped notice. The likeliest answer is that prices for mining company shares as well as the underlying minerals tend to be very volatile. The volatility in commodity stocks makes it feel like the commodities themselves are doing more poorly than they actually are.

But many investors who may now be commodity-shy could be missing out. As rising commodity prices and prospects for more of the same make the lives of most Americans more of a struggle, they also offer a way out for investors, an opportunity to leverage the scorpion’s sting to enhance their investment success.

I believe the ascent of the world’s emerging economies will leverage commodity gains. In my writings, I’ve focused a lot on China, but remember that China, big as it is, is only a relatively small part of the emerging world.

The following graphic shows why investors, especially American investors, should dramatically overweight commodities. The map comes from the most recent edition of the yearly Minerals and Commodity Yearbook, published by the U.S. Geophysical Survey (USGS) at the end of February 2019. The map makes clear a number of critical issues confronting America. 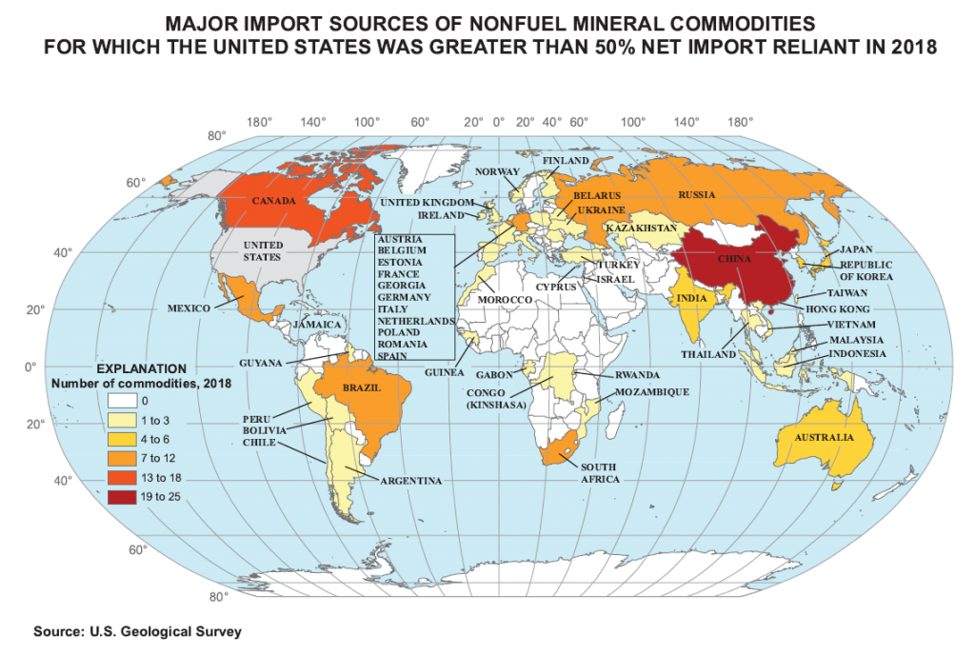 I’ve noted before that the U.S. has grown ever more dependent on other countries for commodities. These include commodities that are both critical and scarce, such as rare earths, and those, like nickel, that while critical are not particularly scarce.

The USGS map is color coded. The redder the country, the more dependent the U.S. is on it for commodities. The only dark red country is China.

China provides more than 50% of between 19 and 25 commodities. In other words, China is more important than any other country, including the U.S. itself, in providing foundational materials for our growth.

For some items, such as diamonds and titanium, other countries could substitute for China’s exports. But there are many others, ranging from rare earths to gallium, where it would be hard, in fact, likely impossible, to get by without China.

Moreover, in some cases, such as cobalt, China supplies less than 50% of our needs but has the world’s largest soup-to-nuts supply chain. That makes it almost certainly a greater than 50% supplier of refined cobalt.

One immediate geopolitical consequence is that we are almost certain to strike a trade agreement with China; we’re too dependent on China not to. And whatever the bluster, it won’t be a game changer for China.

For investors, if we are right about the world continuing to be driven by commodity-hungry developing economies, which are major consumers of commodities as well as producers, commodity prices are in a long-term uptrend.

Increasingly, the developed world including the U.S. will have to be price takers, paying whatever producers ask when it comes to some of the most important commodities of which we ourselves don’t produce enough.

These trading inroads are one reason I believe the dollar’s role as the world’s most important reserve currency is coming to an end. As that role winds down, the U.S. will face much higher dollar-based commodity prices.

Then there’s the situation with copper. By my calculations, the price of copper going out five or more years will be far higher than almost anyone expects. And that’s great news for the best-situated copper producers.

Copper is a crucial commodity. The industrial world can’t function without the “red metal.” And right now, the world is running on a mere 10-day supply of copper reserves.

When the supply of a commodity we need is shrinking…and demand is exploding…prices are primed to soar. Want to score market-beating gains? Click here for my latest copper play.