6 Catalysts for the Next Pot Stock Rally

Snap quiz: What’s the most widely used illegal drug in the United States?

[cue the theme from Jeopardy]

Time’s up. The surprising answer: marijuana.

Yep, despite the forward movement of marijuana legalization, the substance is still on the federal government’s list of scheduled drugs. At the very top of the list, in fact.

The rush to legalize marijuana at the state level has obscured an important reality for investors. Under federal law, marijuana remains illegal as a tightly controlled Schedule 1 drug. We’re also seeing a growing black market for marijuana.

Throughout the U.S. and across the border in Canada, the legalization of marijuana has fueled illicit street sales, even in areas where prohibition has been lifted.

Federal and state governments realize that the marijuana boom is a potential windfall in tax revenue. prompting officials to impose a growing roster of marijuana taxes and fees.

Illegally sold pot avoids taxes, making it considerably cheaper than the legal product. The spreading black market has spawned an increase in arrests for marijuana use.

These paradoxical developments underscore a truism that applies to both life and investing: always remain wary of unintended consequences.

The growth story remains in place…

After a long march higher, marijuana sector stocks got overvalued and underwent a correction in 2019. But sales growth remains in place, as this chart shows. 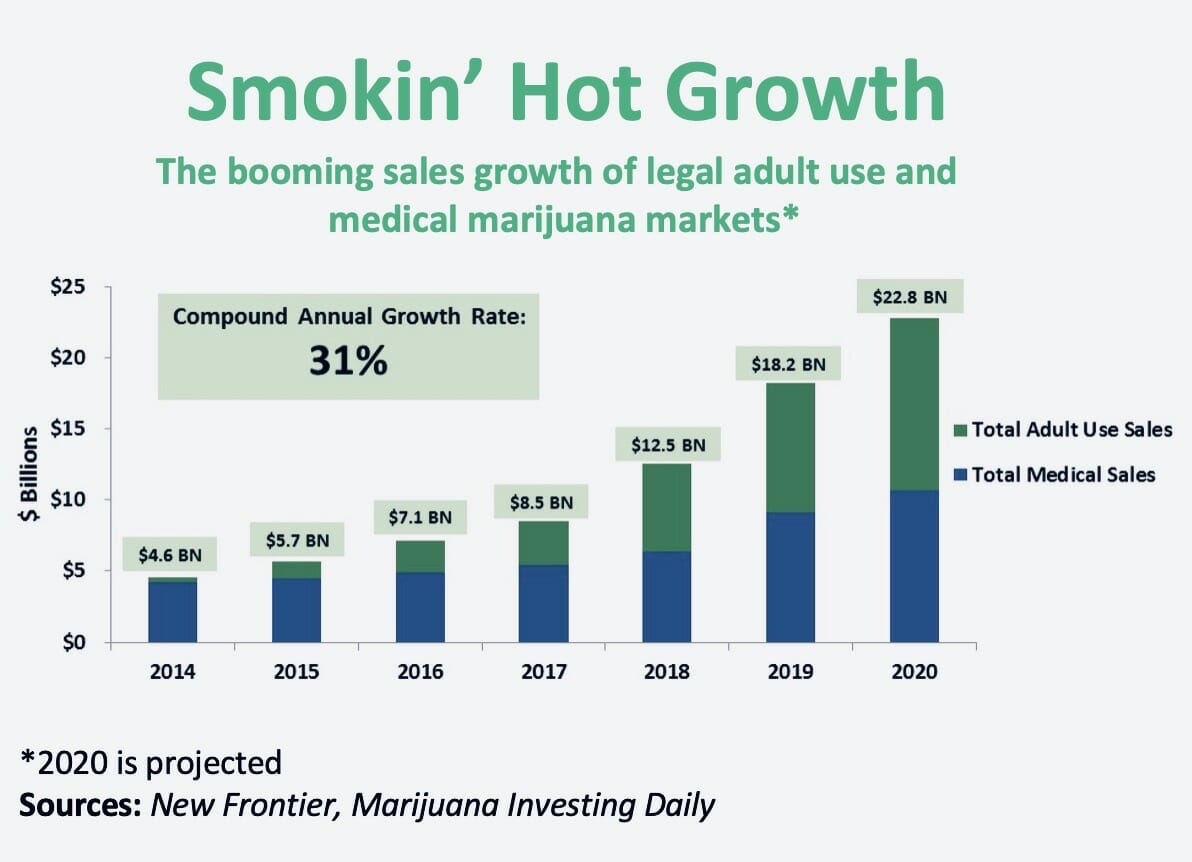 Here’s the good news for marijuana investors: I’ve pinpointed six potential legislative “triggers” for the next big rally in pot stocks. I examine each bull market catalyst below.

These growth triggers should allow the industry to mitigate its legal dilemmas and fuel the next upward trajectory in marijuana stock prices.

Marijuana investing is inherently aggressive and not for the risk averse. Many investors in this sector have gotten clobbered in recent months. But selling in a panic, regarding any type of investment, is never a good idea. Allow me to explain why patient marijuana investors should soon be rewarded.

Drugs, substances, and certain chemicals used to make drugs are classified by the U.S. Drug Enforcement Administration (DEA) into five distinct schedules (i.e., categories) depending on the drug’s acceptable medical use and the drug’s abuse or dependency potential.

Schedule I drugs have no currently accepted medical use and aren’t considered safe to use even under medical supervision. They’re considered to have a dangerous potential for abuse and dependency. Marijuana falls into Schedule I, under the Controlled Substances Act (CSA).

The CSA was passed in 1970, at a time when the widespread rebellion of the counter-culture prompted the Nixon White House to launch a “War on Drugs.”

Regardless, states and other jurisdictions have continued to implement policies that conflict with federal law, beginning with the passage of California’s Proposition 215 in 1996.

Six Potential Triggers for a Rally

The House Energy and Commerce Subcommittee on Health this month held a hearing on six marijuana bills, including two that would federally legalize cannabis.

Each of these bills is significant in its own right, but taken together, they represent a turning point in how the federal government views marijuana. Passage of one bill (or any combination thereof) would have a huge positive impact on the investment side of the industry.

The MORE Act would federally deschedule cannabis and expunge the records of those with previous marijuana convictions. MORE also would impose a 5% tax on cannabis sales, the revenue from which would be reinvested in communities most harmed by the War on Drugs.

This legislation, from Rep. Morgan Griffith (R-VA), would move marijuana from Schedule I to Schedule II under the CSA and stipulate that the federal government can’t “prohibit or otherwise restrict” state-legal use, possession, transportation, production and distribution of medical cannabis.

A bipartisan group of House members, led by Rep. Earl Blumenauer (D-OR), introduced the bill last year. It would simplify the registration process for researchers interested in studying cannabis and allow certified scientists to obtain research-grade cannabis from private manufacturers.

The Medical Cannabis Research Act, sponsored by Rep. Matt Gaetz (R-FL), would require the Justice Department to approve additional manufacturers of research-grade marijuana, protect research institutions interested in conducting studies on cannabis, and authorize the U.S. Department of Veterans Affairs to inform patients about federally approved cannabis studies in which they can participate.

Rep. Barbara Lee (D-CA) is the sponsor of the Veterans Medical Marijuana Safe Harbor Act, a bill that would make it legal under federal law for military veterans to “use, possess, or transport medical marijuana” in state-legal systems. It also would allow Department of Veterans Affairs doctors to issue medical cannabis recommendations to their patients.

I’ll keep an eye on these six bills. With Uncle Sam getting particularly active on marijuana legalization this year, we’re about to see the cream of the marijuana crop rise higher.