Hemp Gets a Big Boost…From China

I have eclectic reading habits. When I’m not reading books written by Warren Buffett or Benjamin Graham, you’ll find me seeking wisdom in, say, Eastern philosophy. In fact, a touch of Zen can come in handy, when making investment decisions.

The ancient Chinese poet and philosopher Lao Tzu, one of my favorite thinkers, wrote: “To see things in the seed, that is genius.” The metaphor is apt for the hemp industry, which just got a big boost from Sino-American trade policy.

Hemp is the strongest natural fiber in the world and boasts up to 50,000 uses. In particular, hemp seeds are the raw material for a broad range of hemp foods, e.g. hemp oil or hemp protein. (Below, I provide a brief explanation of the difference between hemp and marijuana.)

As part of the U.S.-China trade deal signed in Washington on January 15, China pledges to buy $200 billion of U.S. goods over a two-year period, in return for a lowering of U.S. import tariffs. This so-called “phase one” deal has cheered investors of all types. However, as I’ve previously written, the deal has drawbacks.

Read This Story: When Rhetoric Collides with Reality

That said, a careful reading of the phase one deal does contain good news for at least one interest group: hemp farmers. Therein lays an investment opportunity, because the hemp industry (and publicly traded hemp-related companies) are about to get a big boost from our rivals the Chinese.

Hemp received a major tailwind with passage of the 2018 Farm Bill. Signed into law on December 20, 2018 by President Trump, the sweeping agricultural legislation essentially decriminalizes hemp.

China already has been a major buyer of American-grown hemp, but under the new trade deal, the world’s second-largest economy is now required to buy a lot more of the cannabis crop.

China is the world’s largest hemp producer, currently accounting for about 70% of the world’s output. China recently started rolling back restrictions on hemp use and production.

Hemp is among a list of agricultural products that China agreed to import on a bigger scale over the next two years. The phase one deal states:

“The Parties recognize that the United States produces and can supply high-quality, competitively priced goods and services, while China needs to increase the importation of quality and affordable goods and services to satisfy the increasing demand from Chinese consumers.”

China has cultivated cannabis for thousands of years, but only recently has the Middle Kingdom begun to expand its domestic industry, to meet skyrocketing demand.

The hemp industry also is booming in the U.S. Lawmakers in both parties are striving to streamline regulations to make it easier for hemp farmers to get access to the financial resources they need. The U.S. Department of Agriculture (USDA) is currently finalizing its regulations for the crop after releasing an interim final rule last year.

USDA specified in guidance last year that hemp plants and seeds can be imported from other countries. In 2018, the U.S. imported about $3.3 million in hemp from China.

Companies involved in growing and utilizing hemp occupy an exploding market, as the hemp plant gains respectability and increasingly becomes a cash crop and base material for a huge variety of products (see chart). 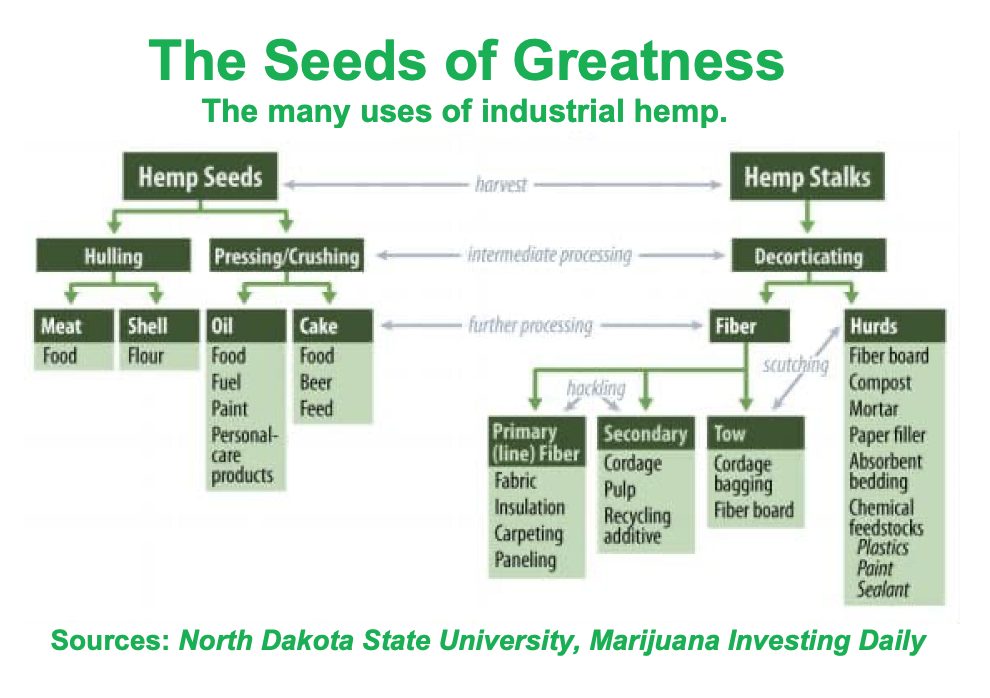 Many readers of Marijuana Investing Daily have expressed confusion to me about the difference between hemp and marijuana. Here’s a quick primer.

“Cannabis” is a genus of flowering plants that includes the primary species cannabis sativa. Both hemp and marijuana are strains of the cannabis sativa species.

Cannabis the drug and hemp the industrial product both contain THC. However, hemp is naturally high in cannabidiol (CBD) and low in THC; the reverse is true of other cannabis variants such as marijuana.

Many investors ignore hemp and focus on marijuana. That’s a lucky break for the contrarian investor. For our latest report on hidden opportunities in cannabis, click here now.