A lot of quarterly financial reports will hit the street this week. And no set of numbers will be watched more closely than Apple’s (NSDQ: AAPL) fiscal year 2020 Q1 results released on January 28. Apple’s share price has been on a tear, doubling during the past year.

Long dismissed as a value stock with limited sales growth prospects, AAPL has suddenly become the one stock everyone must own. I can’t say I’m surprised by Apple’s resurgence. As I stated nine months ago:

“Apple was the first stock I added to the PF Growth Portfolio when I was given the opportunity to do so five years ago. Since then, it has tripled in value. I don’t expect it to do the same over the next five years, but I believe it can double in value which works out to a CAGR (compound annual growth rate) of roughly 15%.”

It looks like I may have been conservative in my ambitious growth estimate for Apple’s share price. If AAPL performs as well during the next three years is it did over the past 18 months, it will once again triple in value.

For that to happen, the company must prove that it can offset flattening iPhone sales with revenue from its recently launched Apple TV+ video streaming service. Analysts will be looking closely at how quickly Apple has been able to take market share away from industry leader Netflix (NSDQ: NFLX) and compete with Walt Disney (NYSE: DIS), which recently launched a streaming service of its own.

For years, AAPL traded at a discount to the overall market. However, now priced at 21 times forward earnings, the stock is valued at a 10% premium to the S&P 500 Index.

Few large-cap stocks have taken a worse beating than General Electric (NYSE: GE) has over the past three years. After trading above $30 in January 2017, GE plummeted below $7 less than two years later. Since then, the stock has gradually rallied but still has a long way to go.

I last updated GE three months ago after the company released its Q3 results. Those numbers came in better than expected, pushing its share price above $10. Last week, GE crossed above $11 after a Morgan Stanley analyst upgraded the stock to “overweight” and raised his 12-month price target to $14.

We’ll soon know if that optimism is warranted. General Electric will release its Q4 and year-end results on January 29. Analysts will be looking at how much damage the Boeing 737 MAX debacle has hurt sales of the jet engines made by GE used in that aircraft.

Read This Story: Why The Boeing Scandal Matters to All Investors

Thus far, Wall Street has cast a wary eye on the GE turnaround story since new CEO Larry Culp took over 15 months ago. Even after appreciating nearly 50% over the past six months, GE is still valued at less than one times sales. That does not reflect much confidence in the company’s ability to grow future revenue.

I am an unabashed fan of Culp. So much so, that upon his hiring I bought LEAPs (long term call options) on GE that expire in January 2021. Admittedly, I jumped in a little early on this trade. But after last week’s rise, I now have a 20% gain in this position with another year before it expires.

I’m not expecting fireworks when GE divulges its Q4 results later this week. But with expectations so low, the company only needs to show modest progress for its share price to continue higher. 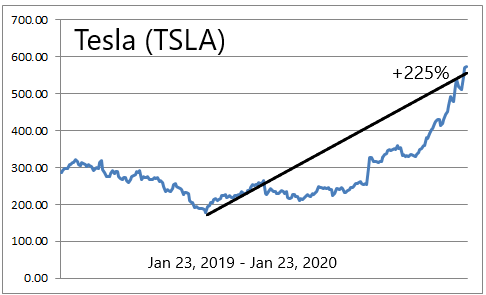 That meteoric rise now makes Tesla the second most valuable carmaker with a market cap of $100 billion. However, it has a long way to go before exceeding Toyota’s (NYSE: TM) $200 billion value.

Quite frankly, I don’t understand the recent buying frenzy over TSLA. The company’s charismatic founder, Elon Musk, frequently makes promises that he fails to deliver. Nevertheless, optimism over Musk’s ability to guide the company to meaningful profitability appears to be unwavering.

Perhaps helping Tesla was a comment by President Trump last week that Musk is “one of our great geniuses, and we have to protect our genius.” It’s not clear what kind of protection Musk deserves, but it may include exemption from trade tariffs and other financial incentives for Tesla.

After reporting an unexpected profit for the third quarter, expectations may be running too high for Tesla’s Q4 results. If the company fails to deliver another surprising jolt of good news, shares of TSLA could quickly plunge.

Making investment decisions based on expectations for quarterly results can be dangerous. If you aren’t one of Wall Street’s insiders with access to that information before it is released, you are at a disadvantage.

But one investment expert who consistently beats Wall Street at its own game is my colleague Jim Fink.

With Jim Fink’s trades, you don’t have to worry about temporary headline risks. That’s because his proprietary trading methods have been proven to generate profits in bull or bear markets, in good economic times or bad.

Over the past 50 months, Jim’s trades have racked up a “win rate” of 84.68%. That’s unheard of for most investors, in any asset class.