As a student at Boston University during the 1970s, I spent an inordinate amount of time commuting to class on Beantown’s transit system, affectionately known as “The T.” Back then, the trains were rickety, unreliable and sometimes dangerous.

I remember the signs along the tracks that read: “Danger! Do Not Touch Third Rail.” The Boston Globe would intermittently run stories of unfortunate souls (often intoxicated students) who had been killed in grisly fashion because of contact with the electrified third rail.

These college memories have resurfaced in recent days, as I watch the White House and members of Congress gear up to slash Social Security.

For many years, the press got in the habit of calling Social Security the third rail of politics. For any politician who cared about re-election, FDR’s retirement program for seniors was deadly to touch. Talk of significantly tampering with Social Security would kill your career, just as surely as touching The T’s third rail would fry you to a crisp.

No longer. Among the many political norms shattered since the presidential election of 2016 has been the notion that Social Security is untouchable. For those lacking a strong investment portfolio, it doesn’t bode well.

The non-partisan Congressional Budget Office (CBO) currently projects that the federal budget deficit will hit $1.015 trillion this year. Federal deficits are expected to average $1.3 trillion per year between 2021-2030. Politicians are seizing on the data as an excuse to cut Social Security.

The White House and Congress this week have been negotiating a new fiscal stimulus package to combat economic damage from the coronavirus pandemic. That’s the good news. However, if you’re in or near retirement, the bad news is that lawmakers have slipped language into proposed coronavirus relief legislation that would pave the way for Social Security cuts.

U.S. Sen. Mitt Romney (R-Utah) and 14 co-sponsors introduced the TRUST Act, or the Time to Rescue United States’ Trusts Act, to be included in the next round of fiscal relief.

Below, I’ll show you how to protect your Social Security benefits and also grow your retirement portfolio.

The mounting risks to your retirement…

The massive federal deficit isn’t just an abstraction. It poses a tangible long-term threat to investors. The deficit eventually will drive up interest rates and tie the hands of policymakers in their ability to counteract economic contractions. The 2017 tax cuts that fueled the deficit only provided a short-term stimulus, mostly in the form of stock buybacks (with little in the way of business investment).

Several threats to your investment wealth are likely to come to fruition in the second half of 2020. The deficit is one of them. Another is the untenable combination of high valuations and negative earnings growth.

Interest rates are low but they won’t stay that way forever. The federal government must issue bonds to finance the exploding deficits. Making such a large amount of bonds attractive to buyers will require higher yields. 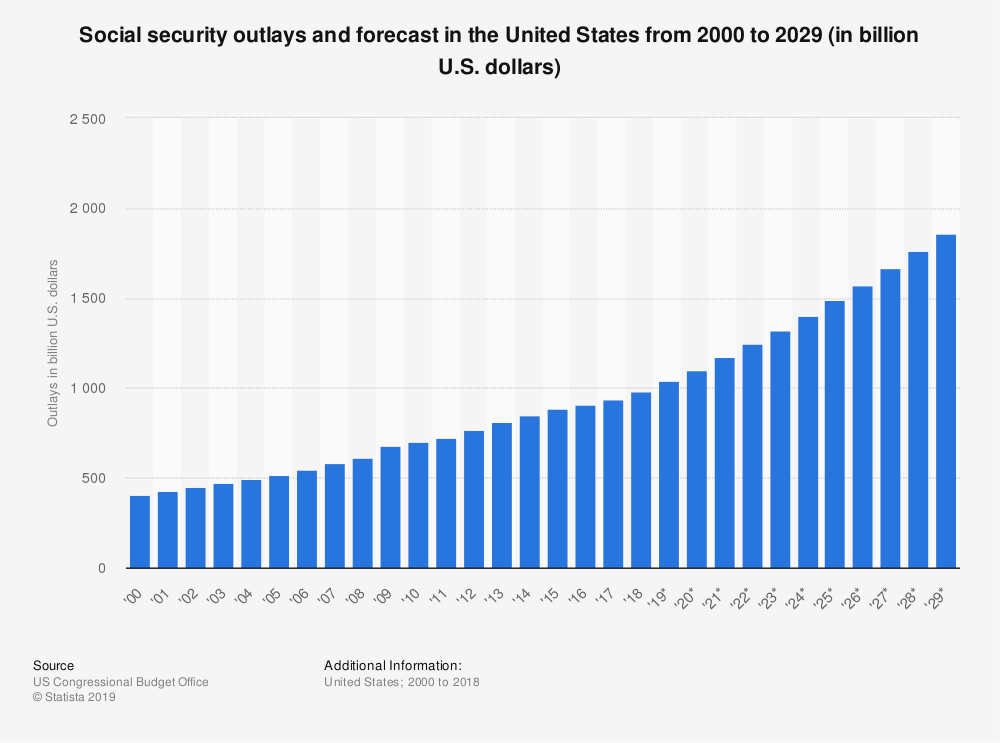 There’s a school of thought that deficits were deliberately created by politicians who want to use budgetary shortfalls as an excuse to slash popular social programs. But motives are beside the point. Social Security is under siege. Period.

Social Security is a pay-as-you-go system. It probably won’t go “broke” as the alarmists claim. But the politicians in Washington just can’t keep their hands off your money. And yes, it’s your money. After all, Social Security contributions are deducted from each paycheck.

The White House has opened the door to cuts in the program, saying it’s a priority for the administration. President Trump this week has threatened to suspend payroll taxes via executive order. These taxes constitute the main source of funding for Social Security.

The foes of Social Security are persistent and they won’t quit trying, regardless of which party is in power. The most discussed legislative curtailment of Social Security involves raising the retirement dates for eligibility. Under current law, the “early retirement” age of 62 is when you can begin collecting Social Security benefits. However, I strongly advise you to wait for “full retirement” age, if possible. If you start your retirement benefits at age 62, your monthly benefit amount is reduced by about 30%.

Experts estimate that benefits drop roughly 7% across the board for each year that the full retirement age is increased. Current proposals for raising the age brackets are all over the map. Another proposal under discussion is to terminate or drastically reduce cost-of-living adjustments. Yet another idea currently making the rounds is to completely privatize the program. Privatization is a perennial political goal that, like a zombie, never really dies.

What does all this mean for you? For starters, keep investing in stocks. In your supposedly golden years, you can’t rely on Uncle Sam. To ensure a secure retirement, stocks are the best game in town.

With headline risks mounting, we’re facing additional pull-backs this year. However, if your portfolio is properly positioned, you can respond calmly to unexpected shocks.

Read This Story: How To Play This Risky Market

You should rotate into stable companies that provide essential services that are consistently used regardless of market or economic conditions. The consumer staples and utilities sectors are prime examples and they’re appealing now. These dividend-payers provide growth, income and safety.

I’m also keen on technology “disruptors” that are tapped into unstoppable trends. Standing out this year are the companies instrumental in the global implementation of ultra-fast 5G wireless technology. For our favorite 5G play, download our special report.

Retirees can’t count on the government, but they can still count on stocks. Social Security will probably be around when you retire, in some form or another. But it’s likely that benefits will shrink over time. The resurgent coronavirus threatens public health. It also threatens the Social Security program.

Build a diversified retirement portfolio that the grasping politicians in Washington can’t touch. As we used to tell ourselves when riding the subway in college, don’t take crazy chances.

Questions about Social Security and retirement investing? Drop me a line: mailbag@investingdaily.com