A few days ago, I offered “3 Hedges Against the Coronavirus Crisis.” From a macroeconomic perspective, I suggested selling oil, buying gold, and increasing exposure to the biotech sector. Today, we’ll take a closer look at how the outbreak has affected specific companies.

If the coronavirus does morph into a pandemic, many sectors of the global economy will be severely impacted. In the near term, perhaps no industry will be hurt more than travel and leisure. That may create a buying opportunity once the virus is contained.

We have already witnessed the immediate impact of the virus on certain stocks. Last week, an Italian cruise line operator held one of its ships in port after a passenger came down with the virus. As a result, the other 7,000 passengers on board were trapped on the ship with nowhere to go.

The fear that something similar may happen on other ships drove down Royal Caribbean Cruises (NYSE: RCL) more than 13% over the last two weeks of January. As a result, its share price is back to where it was a year ago. 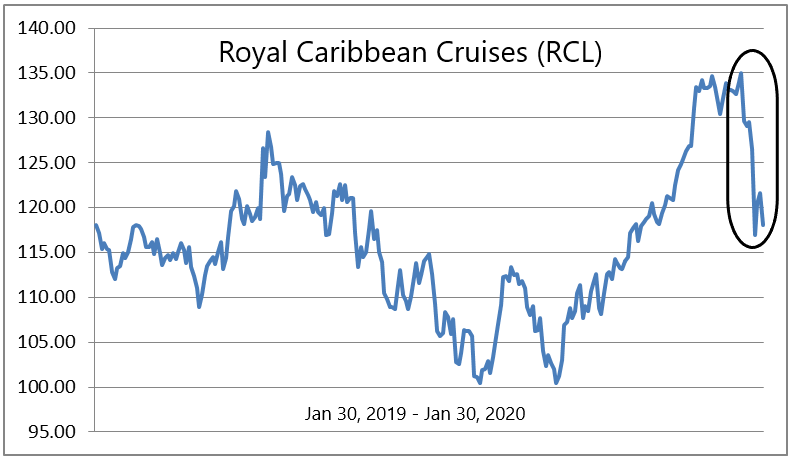 Royal Caribbean announced the cancellation of all cruises from Shanghai until the virus has been fully contained. Fellow cruise ship operator Carnival (NYSE: CCL) made a similar declaration. Carnival’s share price has also lost 13% of its value since the coronavirus outbreak was first reported.

A cruise ship is about the last place you’d want to be with someone infected with a virus. Passengers are crammed into tight spaces and share food from a communal buffet table for days on end.

Another place you wouldn’t want to be with someone carrying a contagious disease is an airplane. While in flight, the air is recirculated through the cabin after being screened through a HEPA filter. However, when the plane is idling on the ground the filtering system runs at reduced power. That leaves passengers more vulnerable to infection.

For that reason, many airlines have curtailed service to and from China. On January 29, Delta Air Lines (NYSE: DAL) announced that it is reducing the number of flights to China due to lower demand.

It appears the stock market was anticipating such a move. Delta’s share price dropped 8% in late January despite solid Q4 results released a few days before the coronavirus outbreak.

American Airlines (NSDQ: AAL) went one step further, suspending all flights from Los Angeles to Beijing and Shanghai from February 9 through March 27. The biggest loser among U.S. carriers was United Airlines (NSDQ: UAL). Shares of UAL dropped 13% during the second half of January. United canceled all flights to Beijing and Shanghai, and also Hong Kong.

The airline industry was already reeling from the Boeing (NYSE: BA) 737 MAX crisis. The company recently acknowledged that the plane will be grounded until at least the middle of this year. Last week, Boeing announced its first full-year loss in more than 20 years and said that costs associated with the troubled aircraft will exceed $18 billion.

Also read: “Why the Boeing Scandal Matters to All Investors“

Reduced service to China could delay sales of new Boeing aircraft to airlines losing revenue due to the virus. For Boeing, the coronavirus outbreak could not have come at a worse time. After peaking above $440 a year ago, shares of Boeing ended January below $320.

If people aren’t traveling then they aren’t staying at hotels and resorts, either. For that reason, Marriott International (NSDQ: MAR) fell 5% over the last half of January as did Wyndham Hotels & Resorts (NYSE: WH).

Initially, the hotelier with the most high-end rooms in China, Hilton Worldwide (NYSE: HLT), fell twice as far as its less-exposed rivals. The company responded swiftly. On January 27, Hilton pre-released full-year results (due February 11) that included record growth. That placated the stock market and cut its post-coronavirus loss in half.

The casino industry is also taking its lumps as a result of the virus. MGM Resorts International (NYSE: MGM), which owns a majority interest in the MGM Macau (China) resort and casino, plunged 10% in the days following the outbreak.

Wynn Resorts (NSDQ: WYNN) fared even worse, losing almost 20% of its value due to its large exposure to Macau. Since the Chinese government enacted travel bans throughout China on January 24, arrivals in Macau have dropped by nearly 70%.

During the last two weeks of January, these 11 travel stocks lost roughly $30 billion in combined market cap. My guess is most of them will quickly recover once the coronavirus has been completely contained.

For short-term traders, the virus is a godsend. Option premiums are soaring in value since no one knows which way this situation will play out. Guess right, and a small fortune can be made via options in a matter of weeks. But guess wrong, and the equal-sized amount can quickly go down the drain.

But maybe options trading isn’t for you. As I mentioned above, I recommend increasing your exposure to the biotechnology sector.

In fact, a medical breakthrough has come to our investment team’s attention that could pose the single biggest money-making opportunity in biotech history.

An under-the-radar biotech company has developed a miracle cure that could save 100 million American lives.

Don’t wait on this one. Developments are happening quickly. With one announcement, the stock could soar. Click here for details.