How to Cope With Pandemic Panic

Real-life news is starting to resemble the plot of a sci-fi movie. Wall Street has been brought to its knees, not by economic data or public policy but by a microbe.

Whether the coronavirus turns out to be a full-fledged “black swan” remains to be seen. But so far, the consequences have been dire and seem on track to get worse. Below, I’ll show you the investment moves to make now, to protect your portfolio from pandemic panic.

A pandemic is defined as an epidemic occurring over a wide area, crossing international boundaries and affecting a large number of people.

The worst pandemic in modern history was the Spanish flu of 1918, which infected 500 million people around the world and killed an estimated 50 million. Today, with jet travel and global interconnectedness, pandemics spread faster and pose an even deadlier risk.

The coronavirus pandemic is generating anxiety in stock markets, rousing investors from their long period of complacency. The number of confirmed deaths from China’s coronavirus outbreak rose to 304 on Sunday, as authorities reported 45 new fatalities. Cases of the respiratory illness are spreading beyond China and hopping across continents, reaching even America.

The World Health Organization (WHO) last week declared the coronavirus a global health emergency. Confirmed inflections of the flu-like affliction now total over 13,700, with new cases expected to increase exponentially. As commerce and supply chains get disrupted, analysts are revising downward their projections for global economic growth.

Airlines have been canceling or suspending flights to China. Last Friday, the White House said it would bar entry into the U.S. by most foreign nationals who had recently visited China.

Pandemics not only kill people. They’re bad for business and that weighs on stocks. As the following chart shows, stocks took it on the chin last week, largely wiping out January’s gains. 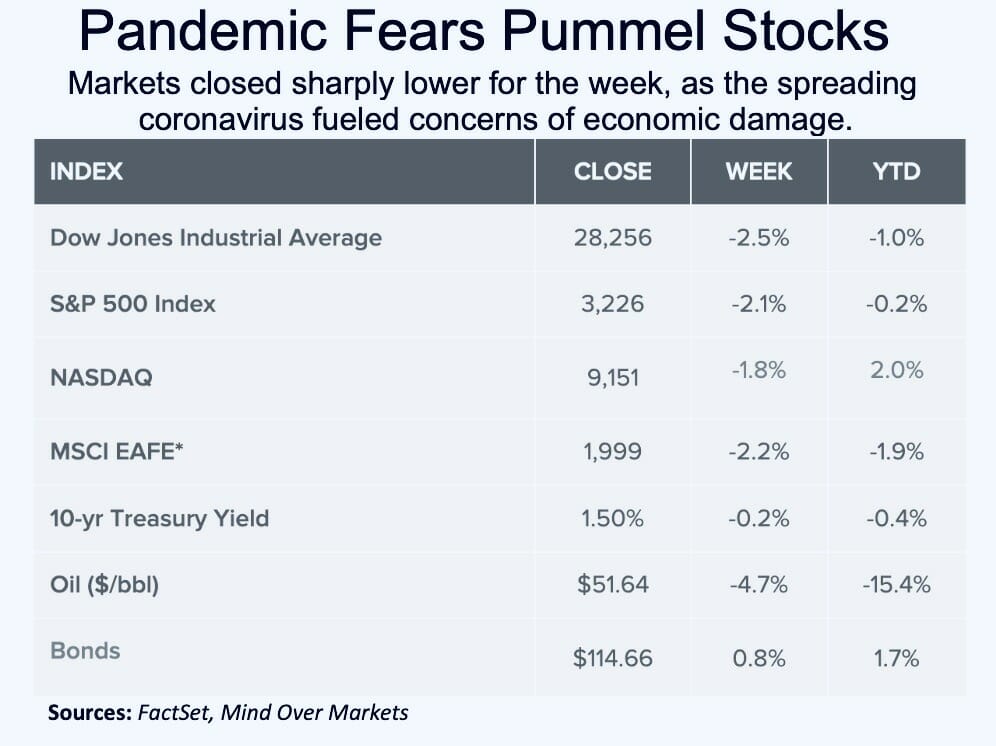 When stocks are overvalued, as they are now, triggers for sell-offs can come in unexpected forms. Whether it’s a drone missile attack or a tiny virus, skittish investors seize on excuses to head for the exits.

Consider Brexit. Wall Street seems to think that the chaos surrounding Britain’s exit from the European Union is over. Not by a long shot. Brexit already is damaging the British and European economies and by extension the world’s.

Britain last Saturday officially crashed out of the EU, but details of the divorce remain to be hammered out. Brexit just might be the catalyst for a global recession and market correction.

Maybe some of you find my sentiments alarmist. After all, last year was great for stock market investors. The Dow Jones Industrial Average returned 23.76% in 2019.

My point is, prolonged asset bubbles generally end in epic collapses. Beware of the financial “expert” who utters these dangerous words: “It’s different this time.”

From pandemics to debt bombs…

Getting short shrift by the media is the threat of private and public debt, which has mushroomed around the world. The size of the global leveraged loan market is about two and a half times the size of the U.S. subprime market right before the Lehman Brothers bankruptcy in 2008.

Since the financial crisis of 2008, when the Federal Reserve pushed its target interest rate to a record-low 0.25%, markets have been awash with cheap money. Corporate America went on a borrowing binge.

Thanks to the 2017 tax cuts, Uncle Sam has taken on a lot of debt, too. The non-partisan Congressional Budget Office (CBO) last week projected that the federal budget deficit will hit $1.015 trillion this year. Federal deficits are expected to average $1.3 trillion per year between 2021-2030.

When the federal budget deficit is high (as it is now), a large quantity of bonds must be sold to finance the deficit, which in turn compels the government to offer higher rates of interest to sell enough bonds.

The interest rate on Treasury bonds is the single most important rate of interest, so as rates on bonds get higher, the result is higher borrowing rates for consumers and businesses. As borrowing costs increase to pay for the deficit, it could trigger a wave of corporate bankruptcies and global financial contagion. This debt bomb could explode when the economy contracts.

In developing countries, about $3 trillion in loans have been doled out to the corporate sector. At the same time, deeply indebted euro zone governments such as Italy and Greece have received massive loans that they can’t possibly repay. In 2017, bankers extended a 100-year loan to troubled Argentina as if they were giving out candy.

Contagion, in the literal and financial sense, lurks around the corner. Take proactive measures. Hedge your portfolio with defensive plays (e.g., dividend-paying utilities stocks) and precious metals such as gold and silver. You shouldn’t panic but don’t be complacent, either.

I just highlighted the global health crisis posed by the coronavirus outbreak. But do you know the most common health problem that afflicts older Americans? This affliction isn’t cancer, Alzheimer’s, or diabetes. It’s chronic pain.

One in five adults in the U.S. suffers from searing pain that resists conventional treatment. And until recently, all existing treatments had harmful side effects. But one biotechnology company has developed a new addiction-free cure and its stock price is primed to blast off.

You’ve probably never heard of the company. Wall Street analysts are ignoring it. But our investment experts have uncovered this hidden biotech gem and now’s the time to invest.

You need to act quickly, before the rest of the investment herd catches on and the stock gets too expensive. Click here to learn more.