“Canna-Billions” Are Up For Grabs

For generations, marijuana was demonized as the handiwork of the devil. Even Ronald Reagan, who harbored many libertarian social views, stated during the 1980 presidential race: “Marijuana, pot, grass, whatever you want to call it, is probably the most dangerous drug in the United States.”

But let’s fast forward to the 2020 presidential race. Mainstream attitudes toward marijuana sure have changed.

President Trump has made anti-pot statements in the past (notably, the erroneous claim that pot smoking causes the loss of IQ points). But Trump has formally stated that he believes states should have the right to manage their own policies with regard to medical and recreational marijuana.

Sen. Bernie Sanders (I-VT), a presidential candidate, pledged at an Iowa rally this week that if he is elected to the White House he will “legalize marijuana in every state in this country” on his “first day in office, through executive order.”

Former South Bend, Indiana Mayor Pete Buttigieg (D), a presidential candidate, recently said that if Congress refuses to legalize marijuana when he is in the White House, he will hop aboard Air Force One and “fly it directly into the home district of a member who is standing in the way” to generate pressure from constituents.

The marijuana industry is volatile, but over the long haul, the overall trend for pot stocks points in one direction: up.

Arcview Market Research and its research partner BDS Analytics estimate that spending on legal cannabis worldwide accelerated in 2019, soaring 38% to $16.9 billion, and should eventually reach $31.3 billion in 2022, growing at a 26.7% compound annual growth rate over the five-year frame from 2017. The estimates call for a $57 billion worldwide market by 2027, a figure that exceeds the annual gross domestic product levels of nine U.S. states.

Sure, the marijuana industry suffered a correction in 2019. But now, you can find worthwhile bargains in the sector. There are “canna-billions” to be made.

Read This Story: Pot Stocks: Buy When There’s Blood in the Streets

Marijuana legalization is an unstoppable trend, because it makes money not just for investors but also for whole communities. Case in point: A new academic study shows that legalization generates a broad-based wealth effect.

To investigate the impact legalization has on the economy, researchers at the University of Iowa analyzed 9,810 corporations between 1991 and 2017, finding “a multitude of positive effects” after a state enacts medical marijuana laws.

According to the study:

Let’s look at the latest legal and regulatory developments that are driving the rise of canna-business.

The House bill to legalize medical cannabis for military veterans got two new cosponsors for a total of seven.

The House bill to require the federal government to study the impact of state marijuana laws got one new cosponsor for a total of 31.

A Gallup poll found that Americans who are politically liberal are six times more likely to smoke marijuana than conservatives. Regardless, marijuana use has stayed steady in the U.S. (see chart). 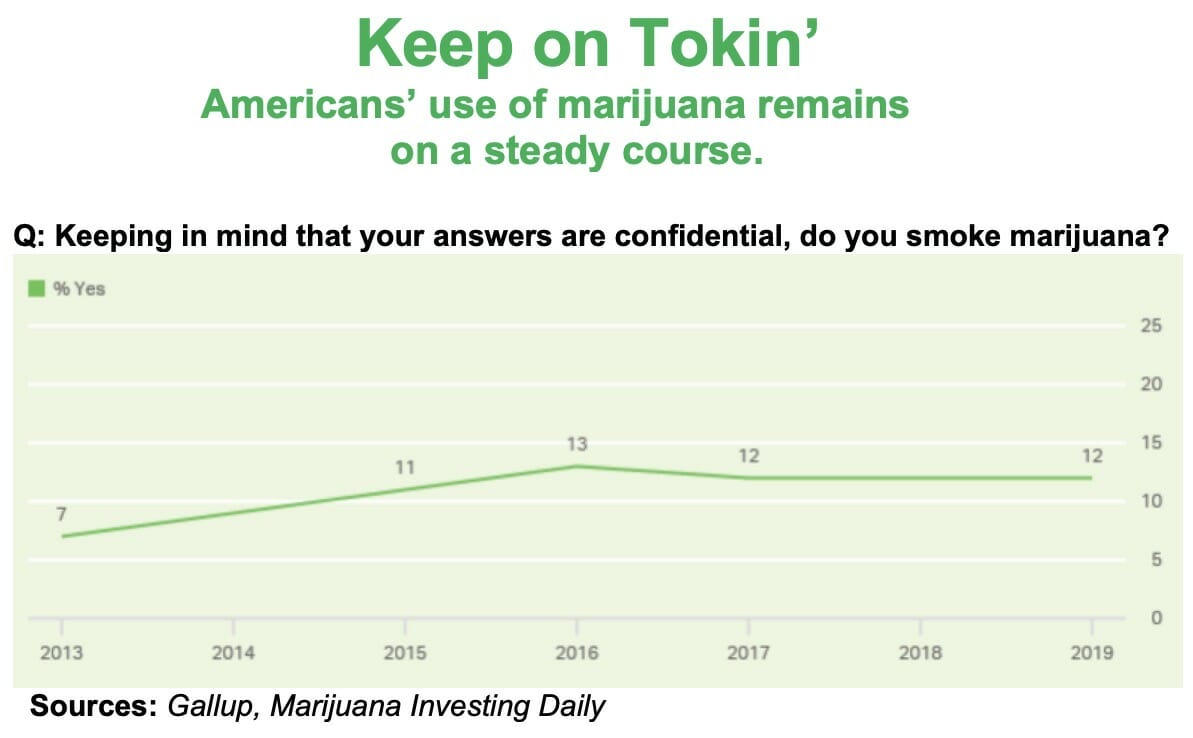 The Federal Bureau of Investigation won’t allow Missouri regulators to access its national background check database for the purposes of screening medical cannabis business employees, until there is a state law codifying the need for such checks.

Senate Banking Committee Chairman Mike Crapo (R-ID) said he is “open to looking at proposals or ideas from the stakeholders and interested parties as to how we solve” issues related to marijuana banking legislation.

An Idaho judge ruled that a seized hemp shipment was not grown in accordance with federal law and can’t be returned to its owner.

A New Mexico court ruled that medical cannabis producers should be able to deduct gross receipts taxes, meaning that the state may owe millions in refunds.

Pennsylvania’s lieutenant governor tweeted, to his counterpart in Illinois: “I’m inspired (and envious) of all the progress you’ve made in Illinois, particularly on marijuana. Can we rent your legislature for a month or so?”

Washington Gov. Tony Evers (D) tweeted: “From expanding telehealth services to improving our hemp program, to ensuring individuals who communicate non-verbally can vote, I am proud of the bipartisan work we were able to accomplish last year.”

John Persinos is the editor-in-chief of Marijuana Investing Daily. For our special report on marijuana stocks that are poised to soar, click here now.