Tesla Shifts into High Gear: Prelude to a Crash?

Last week, shares of electric vehicle manufacturer Tesla (NSDQ: TSLA) jumped 36% in just two days. And that was after it had already gained 55% during the preceding month!

Below, I’ll discuss some of the reasons for Tesla’s meteoric rise and suggest a trading strategy that is considerably less risky than attempting to guess which way the stock will turn next.

You might assume that Tesla had become the target of a hostile takeover attempt, but that was not the case. In fact, there was no specific news at all to explain Tesla’s sudden rise in popularity other than a solid quarterly report released the week prior. 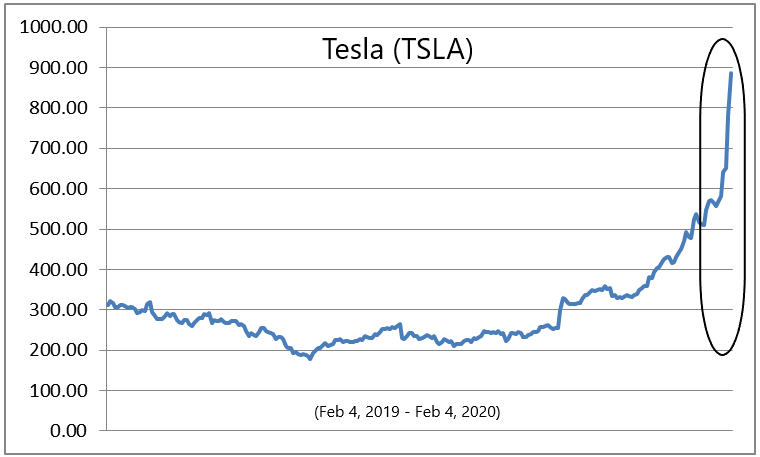 For that reason, some analysts opined that Tesla’s rise was probably due to short-sellers covering their positions. Tesla has long been a popular stock with short sellers due to its inability to meet sales and profitability goals.

The company’s enigmatic founder, Elon Musk, regularly makes promises that he can’t keep. Regardless, Musk enjoys a cult-like following among his adherents who are willing to forgive his frequent transgressions.

Another explanation offered is the increasing emphasis on ESG investing. ESG stands for environmental, social, and governance, which used to be referred to as socially responsible investing. Tesla’s battery-powered vehicle has become the poster child for the ESG movement since its vehicles consume no gasoline.

There may be some credence to that theory. In a letter to shareholders last month, BlackRock (NYSE: BLK) CEO Larry Fink identified climate change as a point of emphasis. “Climate risk is investment risk” Fink stated, and “has become a defining factor in companies’ long term prospects.”

BlackRock manages $7 trillion in assets. If the portfolio managers at BlackRock have started adding Tesla to their portfolios then that would certainly drive its share price higher.

Of course, portfolio managers know better than to pile into the same stock at the same time. That has the undesirable effect of driving its share price considerably higher, reducing the opportunity for future gains.

To me, Tesla’s sudden surge has the appearance of a speculative bubble driven by irrational exuberance. In fact, Tesla’s recent share price behavior is strikingly similar to how Bitcoin (BTC) traded three years ago.

Bitcoin began 2017 trading below $1,000. Later that year, it soared above $20,000 as investors piled into the faddish cryptocurrency. Some analysts predicted that bitcoin would soon be selling for $50,000. 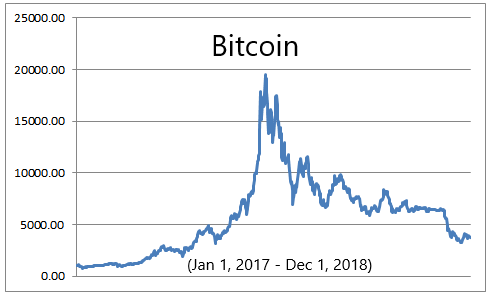 That didn’t happen. Twelve months later, Bitcoin was back below $4,000. Investors that bought bitcoin at its peak lost 80% of their money in less than a year.

I think something similar will happen to Tesla. The problem is, there is no way of knowing exactly when that might happen.

Already, short-sellers that believed Tesla was grossly overvalued at $500 have taken a bath. As Bitcoin proved, in the short run there is no explaining how long a speculative wave can keep rolling.

There is also no limit to the mental gymnastics some Wall Street analysts will go to in justifying a higher share price for Tesla. One analyst noted that at a share price of $900, Tesla was only trading at 30 times estimated earnings in the year 2024.

There are two major problems with that reasoning. First, it doesn’t account for the time value of money. A dollar four years from now is worth less than a dollar today due to inflation. Second, it assumes that Tesla’s sales and profit margin can be accurately predicted over the next four years.

If Elon Musk has proven anything, it’s that there is no way of telling what he may do tomorrow, much less several years into the future. In 2018, Musk famously lit up a joint while being interviewed on a podcast.

Granted, Tesla has an early lead in the electric vehicle market. However, an early lead does not always result in victory. Fifteen years ago, the Blackberry (NYSE: BB) smartphone was all the rage.

That is, until Apple (NSDQ: AAPL) introduced its iPhone in 2007 and went on to dominate that market ever since. In 2008, shares of Blackberry traded above $140. Today, those same shares can be had for $6.

We can be sure that the executives at Ford (NYSE: F), General Motors (NYSE: GM), and Fiat Chrysler (NYSE: FCAU) are not sitting on their hands. In fact, later this year Ford will begin delivering an electric version of its popular Mustang model that has already sold out.

For that reason, I believe it is only a matter of time until Tesla comes crashing back down to earth. The problem is, so do a lot of other people.

Normally, I’d suggest buying a put option on Tesla rather than shorting the stock. However, the implied volatility on put options expiring in six months is 75%. That means you’d have to pay a huge premium to buy those options.

Here’s another way to bet on a big drop on Tesla that won’t break the bank. Instead of shorting TSLA, sell short the First Trust NASDAQ Global Auto Index Fund (CARZ). 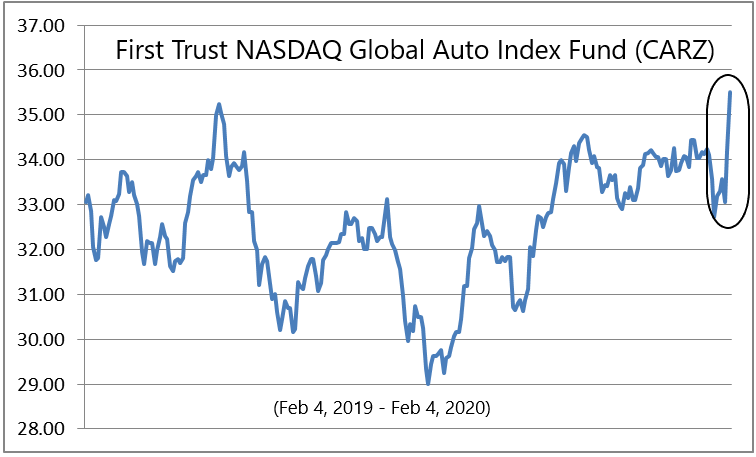 Tesla is the biggest holding in the fund, comprising roughly 10% of the total portfolio. If TSLA tanks, the entire sector will probably sell off in sympathy.

You won’t get as big a move in the fund as you would the stock. However, the risk of being wrong is considerably less. Let’s face it, the automobile sector isn’t exactly hot. If not for Tesla’s recent spike in value, CARZ would have posted a negative return over the past year.

The stock market does not assign the same earnings multiple to the “Big Three” automakers that it does to Tesla. In fact, most auto stocks trade at a considerably lower multiple than the S&P 500 Index. When Tesla soared above $800 last week, it was valued at more than 60 times forward earnings. On average, the Big Three automakers are valued at 90% less than that. 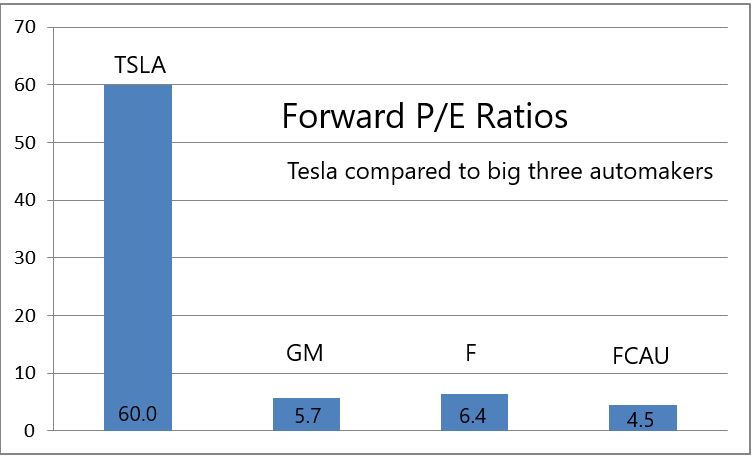 That means a big drop in TSLA will not be offset by an equal rise in its competitors. I don’t see much downside risk in this trade, and the gain could be considerable. Only six months ago, CARZ was trading near $29, which is 17% below its recent share price. If Tesla hits the skids, my guess is that CARZ will drop below that level and then some.

Even if that happens, there are much easier ways to make money in the stock market than waiting for Tesla to finally get its comeuppance. And one of them is to follow the advice of my colleague, Jim Fink.

Jim Fink’s proprietary trading methods have been proven to generate profits in bull or bear markets, in good economic times or bad.

Over the past 50 months, Jim’s trades have racked up a “win rate” of 84.68%. That’s unheard of for most investors, in any asset class.