Marijuana: The Legal Revolution of 2020

During the Nixon Era, when I was a teenager and subversion was in the air, country folk singer John Prine was all the rage. While I was writing today’s column, the chorus to his 1971 song “Illegal Smile” popped into my head:

“Fortunately I have the key to escape reality
And you may see me tonight with an illegal smile
It don’t cost very much, but it lasts a long while
Won’t you please tell the man I didn’t kill anyone
No I’m just tryin’ to have me some fun.”

Prine’s lyrics obviously refer to marijuana. My, how things have changed.

By the end of 2020, nearly all U.S. states could end up allowing some form of legal marijuana, including a few “deep red” states. In fact, many conservative Republicans are jumping aboard the legalization bandwagon.

This is the year in which we’ll likely witness a seismic shift in marijuana laws, creating a multi-year tailwind for pot stocks. For growth investors in search of profits, this unstoppable political trend should evoke a very legal smile.

In the U.S., marijuana remains illegal on the federal level. Medical marijuana is currently legal in 33 states and the District of Columbia. Recreational use is legal in 11 states and DC (see map). 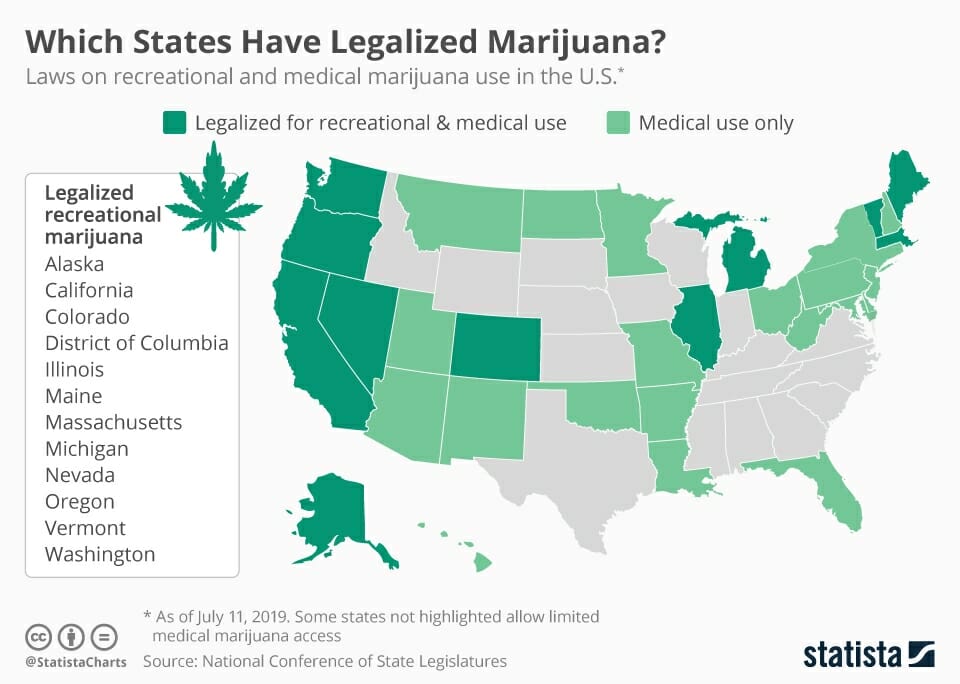 Analysts estimate that an additional 15 states should have legalized medical and/or recreational pot by 2020. Actions on the federal and state levels have the power to dramatically move pot stocks up or down.

State lawmakers from coast-to-coast are lining up their proposed bills as legislative sessions start. At the same time, legalization activists are hurrying to collect and certify signatures to meet deadlines for getting their referendum questions to voters.

If all of these current efforts succeed, every state in the union could have marijuana laws on the books that contradict federal law and legalize pot to some degree or another. Marijuana is on track to becoming a $57 billion-a-year industry.

Federal bills are pending in Congress, but the bottleneck is in the Senate, where Senate Majority Leader Mitch McConnell (R-KY) staunchly opposes legalization. At a minimum, though, pro-marijuana lawmakers are optimistic that at least a federal banking bill will get through that eases the access of pot firms to capital markets.

Liberal blue states that allow ballot petitions have for the most part voted to legalize marijuana, including California, Oregon and Massachusetts. Activists are now venturing into red territory.

Below is a roundup of what voters are likely to face at the polls in November, and what some state legislatures are considering this session. These initiatives are likely to be fodder for the 2020 presidential campaign as well.

Arizona. Five states voted on recreational legalization initiatives in 2016, and only one failed: Proposition 205 in Arizona. However, the margin was narrow, which means the odds are favorable for a ballot initiative this year.

Missouri. Advocates in the Show Me State are collecting signatures in an effort to qualify for the November ballot a bill that legalizes recreational pot. Political odds-makers say chances of a proposal getting on the ballot and passing are strong.

New Jersey. After falling short of the votes needed to legalize marijuana in the legislature last year, New Jersey lawmakers opted to put the question before voters instead. Polls reflect widespread support for legal marijuana.

New Mexico. This state will likely prove to be the first 2020 battleground. The Legislature reconvened last Tuesday and marijuana legalization tops the agenda.

New York. As with adjacent New Jersey, lawmakers in New York failed to legalize marijuana in 2019. However, Gov. Andrew Cuomo (D) stated last month that marijuana legalization is a priority for his administration and he vows to push hard to decriminalize recreational pot in the Empire State.

Oklahoma. Voters in the Sooner State will probably get the chance to vote on a recreational initiative after legalizing medical marijuana through a referendum in 2018. This politically conservative state is home to a rapidly growing pot industry with the highest number of medical marijuana patients per capita in the country. A proposed ballot initiative, State Question 807, backed by New Approach PAC, has been filed with the secretary of state’s office.

South Dakota. Marijuana legalization ballot questions have been validated by the secretary of state.

Idaho. This state currently prohibits all types of cannabis, making it an outlier in a region that has taken a libertarian stance on pot. Idaho shares borders with Washington, Oregon and Nevada, all states that boast thriving legal marijuana markets. To the north is Canada, which legalized recreational marijuana in 2018. Legalization proponents are accumulating signatures in an effort to put medical marijuana to voters in November.

Looking for investment opportunities in the fast-growing cannabis industry? Click here for our cannabis report.

John Persinos is the editor-in-chief of Marijuana Investing Daily. Send your questions and comments to: mailbag@investingdaily.com