I don’t often buy stocks based solely on their technical merits. Usually, I buy a stock based on its underlying fundamentals and use technical indicators for price and timing guidance. However, there is one stock trading in the market this week with such an appealing chart that I think it is worth buying for that reason alone.

That company is Yum China Holdings (NYSE: YUMC), which operates more than 9,000 fast-food restaurants in China. Its most popular brands are KFC, Pizza Hut, and Taco Bell. That’s how global trade works. They provide us with inexpensive goods and we give them heartburn in exchange.

On February 6, Yum China released Q4 results that included an 8% increase in system sales and a 14% gain in operating profit. Under normal conditions, those results would be satisfactory. In this case, YUMC fell below $42 after cresting above $50 last month. 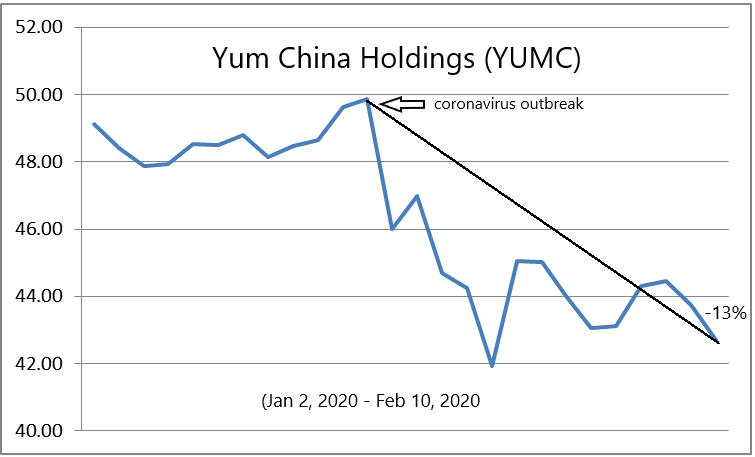 Of course, conditions are anything but normal in China at the moment. An outbreak of a novel coronavirus in China in January has the stock market running scared. As I reported last week, the hospitality industry is getting slammed due to extended travel bans to and from China.

In addition, the Chinese government has imposed severe commuting and workplace restrictions to prevent the spread of the virus. That means millions of people aren’t going to work. And when people stay home, they don’t eat lunch at the fast-food restaurants near their workplaces.

That may not matter. In addition to Yum China, many restaurant chains in China, including McDonald’s (NYSE: MCD) and Starbucks (NSDQ: SBUX), have temporarily closed hundreds of locations in affected areas until the scare is over.

Last week, Yum China revealed that it has closed nearly a third of its stores due to the virus. At the stores that have remained open, sales have been about half their normal volume. That means total system sales are about 65% below average.

There is no way of knowing how much longer that will be the case. But even if the epidemic ends tomorrow, first-quarter sales will be far below last year’s results. Already, the company is predicting an operating loss for Q1 and a material impact from the virus on full-year results.

That being the case, this may not appear to be a good time to buy shares of YUMC. But take a look at its stock chart going back one year and you’ll see why now may be an opportune time to acquire the stock. 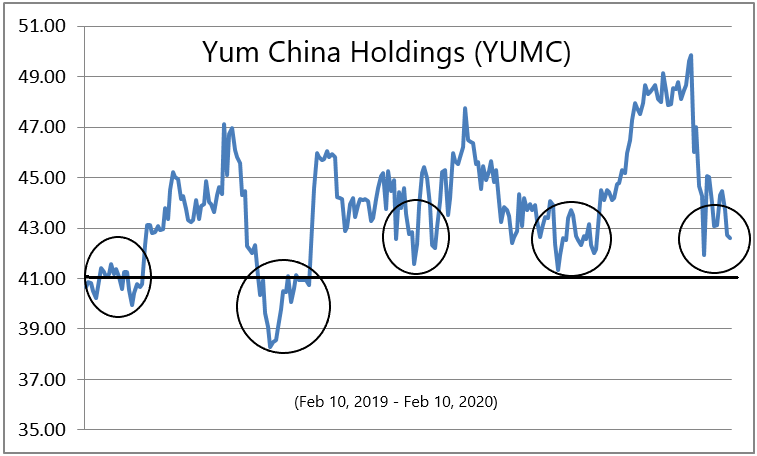 Over the past year, the $41 price point has proven to be a significant level of resistance and support for YUMC. In March and May of 2019, YUM struggled to rise above $41. After breaking above that level, it has fallen below $42 on three separate occasions but bounced back each time.

On January 27, YUMC traded below $42 for the first time since November. It briefly recovered but fell back below $42 at the start of this week. If Yum China can keep its head above water a little while longer, I believe it will quickly rally above $45.

At a recent share price of $41 that works out to a 10% gain. But given the degree of risk, that may not be sufficient to justify buying the stock. However, there is another way to trade YUMC that could more than double that return.

If you’re an income investor, another way to play a rise in YUMC is to sell a put option with the same strike price and expiration date. At the beginning of this week, that option was selling for $1.50. That equates to a yield on capital-at-risk of 3.75% over nine weeks or roughly 20% on an annualized basis.

If YUMC does get put to you at $40, consider yourself lucky. It is only a matter of time until the coronavirus has been contained and billions of hungry Chinese customers are once again able to satisfy their insatiable appetites for fried chicken, beef burritos, and pepperoni pizza.

I bought Yum China in my personal account a couple of years ago and still own it. I know its share price will be volatile, but that doesn’t bother me. I bought it based on China’s rapidly expanding middle-class population, which should drive Yum China’s share price considerably higher over the next decade.

However, you may not be as patient of an investor as I am and you may not share my high tolerance for volatility. If that is the case, there are safer investment strategies you can employ that should pay off much sooner. Consider the opportunities in media/telecommunications.

As consolidation and rapid technological change revolutionize the global media/telecom industry, many investors are asking: What replaces cable TV? What comes after “cord-cutting”? And more to the point, how can they get rich from it? Those are all good questions and I’ve made it my job to answer them.

The so-called “Streaming Wars” are an historic chance to make money. Want to leverage these trends for market-beating profits? I’ve pinpointed a hidden trade that’s poised to reap a windfall. Click here now for details.