Okay, loyal reader, here’s a quick question for you. Which industry has generated the fastest yearly rate of jobs growth in the United States, for the last three years in a row?

Legal marijuana is a jobs generating machine in both the recreational and medical sectors, further proof that the industry and its publicly traded companies have staying power. The marijuana stock swoon last year was traumatic, but those new jobs won’t suddenly disappear.

Marijuana is putting people to work, in biotechnology labs, on farms, behind the counters in dispensary stores and paraphernalia shops, in vaping parlors, in agricultural science…you name it.

As the number of jobs in canna-business grows, politicians are more likely to push for legalization. Marijuana is becoming entrenched as a mainstream business, with more and more families across the country depending on Mary Jane for a paycheck. And politicians are getting addicted to the state and local tax revenue, too.

That’s all welcome news for marijuana investors, many of whom remain rattled by the correction in pot stocks that occurred late last year. The shakeout appears to be ending, though, with the survivors on firm footing and employing masses of people. To play on a phrase from World War II posters: Weed Can Do It.

The employment numbers come from the “2020 Jobs Report,” recently released by the web site Leafly. According to the report, the legal cannabis industry in the U.S. experienced 15% growth in 2019, adding 33,700 jobs.

Marijuana employment growth is even more impressive when viewed over a longer time frame. As the chart shows, the number of jobs in the industry has nearly doubled since 2017: 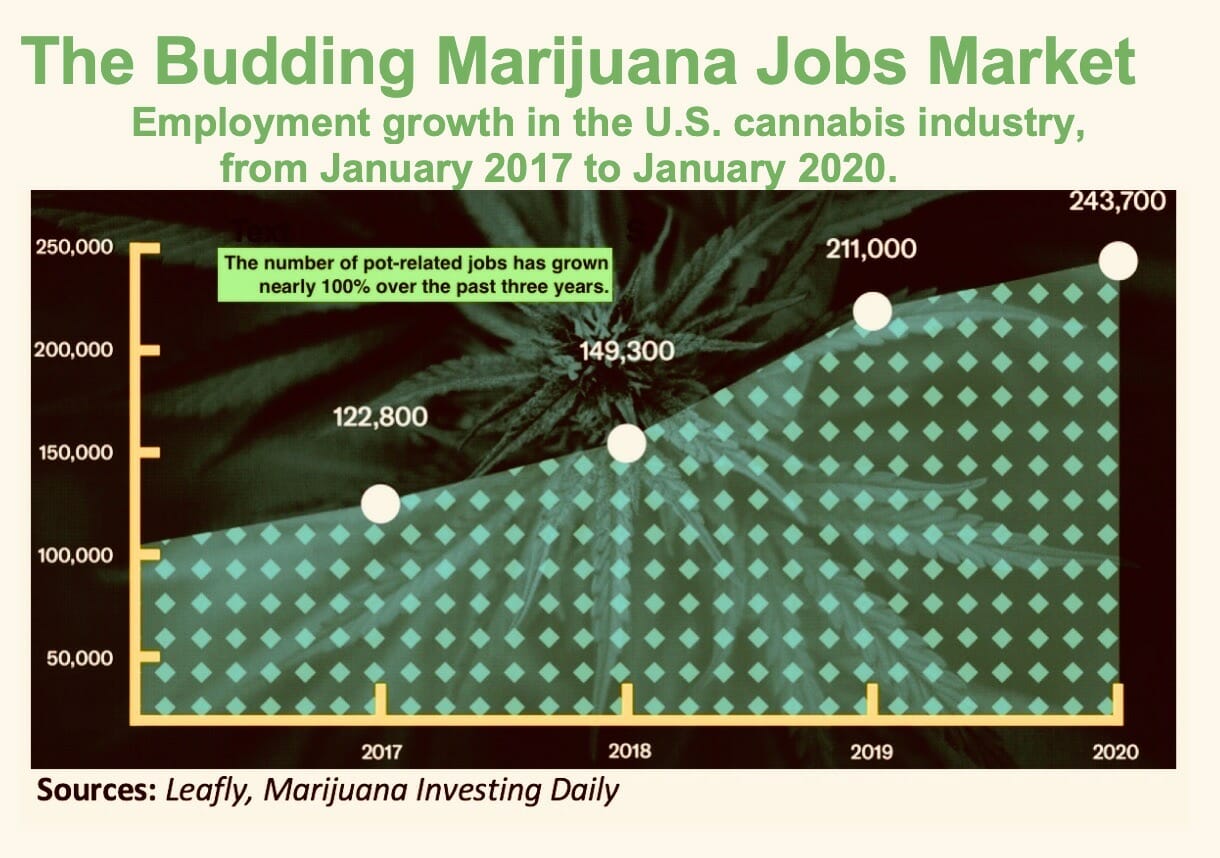 No other industry in the country comes close to the sheer magnitude of new jobs cranked out by the fast-expanding marijuana industry. In 2018, marijuana job growth came in at a pace of 65%. And we’re talking about full-time equivalent jobs. Highlights from Leafly’s 2020 Jobs Report:

Those are stunning numbers, but the business press has barely acknowledged the data. The media barons who decide what we watch, read and hear seem to have a love-hate relationship with pot.

The conventional wisdom currently denigrates the marijuana industry because of the 2019 correction in pot equities. It’s the sort of overreaction that’s typical of pack journalists. Reporters like to build up a trend, only to take perverse pleasure in knocking it down later.

I remember as a kid, watching reporters on the nightly newscasts ridicule The Beatles during their American tour in 1964, calling the group a “fad.” Now, I’m starting to hear the pundits on CNBC call marijuana investing a fad. Throughout the decades, one fact has remained the same: Television news is one of the most reliable contrarian indicators you can find.

As the record shows, I consistently warned my readers last year that the marijuana industry was getting frothy and due for a correction. The correction that finally occurred was necessary…and healthy. Rest assured, marijuana has become a permanent fixture of American free enterprise and it’s still making investors rich.

From coast to coast…

In addition to Massachusetts, California stands out as a major player with an exploding market. The research group New Frontier projects that California will generate $3.1 billion in licensed pot sales in 2020, making it the largest market for legal cannabis in the entire world

Illinois is shaping up to be a vibrant marijuana marketplace as well. In a little over a month since opening up for retail sales operations on January 1, the Land of Lincoln has generated $40 million in pot sales.

Jobs growth is begetting momentum for legalization. In recent days:

Oklahoma voters will probably get the chance to vote on a recreational initiative after legalizing medical marijuana through a referendum in 2018. A proposed ballot initiative, State Question 807, backed by New Approach PAC, has been filed with the secretary of state’s office.

Pennsylvania’s lieutenant governor this week said it was “lunacy” that so many people are still arrested for marijuana in the state.

The Washington State House Appropriations Committee held a hearing on a bill to allow home cultivation of marijuana.

A New Mexico senator filed a bill to allow the state to enter into medical cannabis agreements with Indian tribes.

New Mexico Gov. Michelle Lujan Grisham (D) tweeted: “Recreational cannabis can be the next frontier of New Mexico’s economic expansion. We can get in on the ground floor or we can try to play catch up. It’s clear that New Mexicans prefer we take this opportunity to grow & diversify our economy.”

So ignore the pessimists who say that the bloom is off the marijuana flower. Shoots of new momentum are emerging. That’s why the Investing Daily team continually scours the landscape for inherently solid marijuana stocks.

Here’s the most exciting news: The recent correction in marijuana stock prices has put several appealing pot stocks on the bargain shelf. For our team’s latest research on the most profitable marijuana investments, click here.