The Streaming Wars: Who Wins, Who Loses?

Hardly anyone in our family actually sits down to watch the flat-screen television in the living room. Typically the viewing fare is streaming video, on smartphones, while multi-tasking. My toddler grandsons mostly watch short YouTube cartoons on my laptop.

It’s a far cry from the bygone era of “appointment viewing,” when millions of Americans would rush to their TV sets to watch, say, The Ed Sullivan Show at 8:00 p.m. sharp every Sunday night.

Today’s media serve up a vast cornucopia of anything you want, when you want it, on demand, on any mobile device, twenty-four seven. Investors who pick the right media stocks stand to reap a fortune, but the bewildering pace of technological change makes it difficult to sort the winners from the losers. Below, I’ll steer investors in the right direction.

The fight for the future…

The pace of “cord cutting,” the phenomenon of viewers canceling their cable subscriptions and switching to online options, continues to accelerate. Many media giants keep adding broadband subscribers while losing video subscribers.

Hence the emergence of what’s known as “The Streaming Wars.” The winners in these wars will hand investors enormous profits.

For today’s Mind Over Markets column, I want to focus on this mega-trend, because it’s poised to deliver outsized gains in what probably will be a lackluster year for the broader stock market.

Overvalued equities are poised for a correction in 2020, which means you should focus on mega-trends with the power to transcend market downturns.

Read This Story: Stocks: Bubble In Search of a Pin?

Upping the stakes is the global implementation of 5G (“fifth generation”) wireless technology, which provides super-fast connectivity and download speeds. Media companies that fall behind in the 5G race will stay behind.

The expansion of streaming 5G services exemplifies a mega-trend, which is why competition in the media/telecommunications space is so brutal.

News reports surfaced Monday that a federal judge is expected to approve T-Mobile’s merger with Sprint, clearing the way for the two telecom rivals to overcome existing anti-trust challenges and combine. The court’s decision is slated to be announced today.

But the question remains: amid all of this frantic activity, who wins and who loses? Mergers don’t always work out. Trillions of dollars are at stake, as well as control of what billions of people read, see and hear.

As fourth-quarter 2019 corporate earnings reports pour in, at least one thing is clear: the communications services sector is outperforming.

According to research firm FactSet, the blended earnings growth rate for the fourth quarter is 0.7%, which exceeds previous consensus expectations that called for negative growth. (Blended combines actual results for companies that have reported and estimated results for companies that have yet to report.) Positive earnings surprises recorded by companies in the communication services sector are mainly responsible for the increase in the overall earnings growth rate for Q4.

However, for the past four decades, starting with the dawn of the de-regulatory Reagan era, a continual relaxation of anti-trust rules has fueled a relentless pace of mergers and acquisitions.

Cable companies are transitioning from content distributors to content creators. The name of the game is streaming video on demand (SVoD). According to research firm Statista, the global SVoD market has been exploding and it’s far from saturated (see chart, with data from 2019). 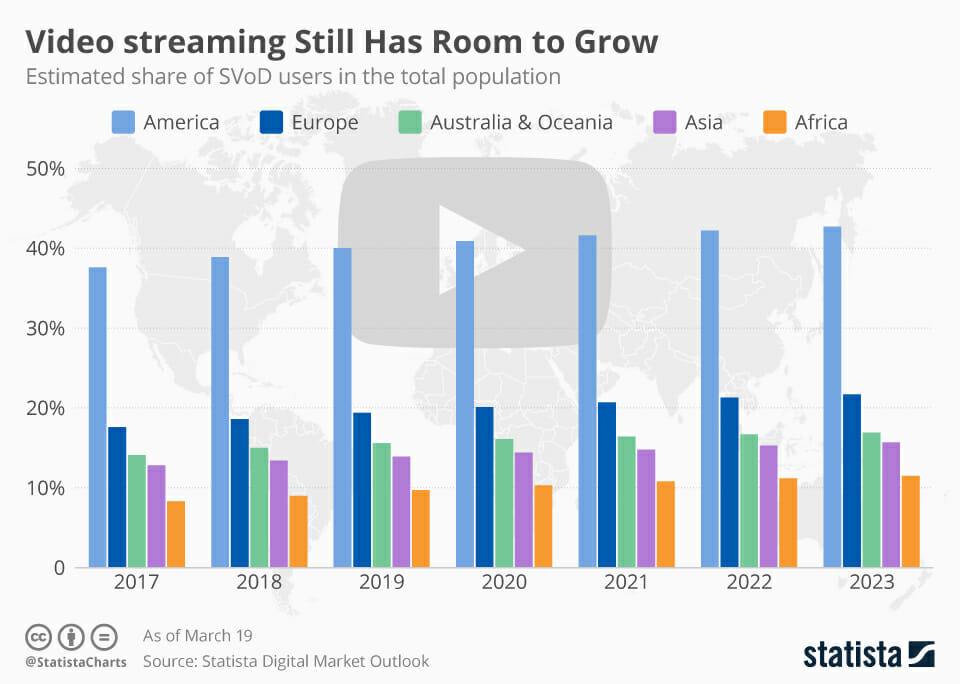 However, for the multinational corporations that own and operate this media, there are downsides. Fierce competition puts pressure on prices (and profit margins) and disruptive technologies threaten the status quo. Investing in new infrastructure is expensive.

Sometimes, what appears to be the right strategic path turns out to be a dead end. Viewer tastes can be fickle. Companies have been known to spend a fortune on original content that no one wants to see. Instead of prestigious awards and boffo ratings, these companies simply end up with debt (and angry investors). Management turnover is rapid and ruthless. Media CEOs can be lauded as visionary heroes one day…and the next day, fired as scapegoats.

Sure, there’s big money to be made from The Streaming Wars, but you need to know where to look. The good news is, our investment experts have done the homework for you. For our report on the companies that are poised to win the fight, click here now.

John Persinos is the editorial director of Investing Daily. Questions or comments? You can reach him at: mailbag@investingdaily.com