Inoculate Your Portfolio Against Coronavirus

Cities under lockdown…biotech scientists rushing to develop a vaccine…travel suspended…financial markets swooning…quarantine centers sprouting up…government officials urging citizens not to panic. It all seems like scenes from a science fiction movie. But these events are unfolding in real life, in real time.

On Wednesday, it appeared as if the coronavirus contagion was under control. Wall Street heaved a sigh of relief.

What a difference a day makes. On Thursday, China’s Hubei province, where the virus originated, reported 242 new deaths, twice the previous day’s toll and the fastest daily rise since the virus was identified in December. Infections have soared to more than 50,000.

In pre-market futures trading Thursday, the three main U.S. stock market indices were poised to open deeply in the red, an 180-degree reversal from the previous day’s new highs.

If you’re spooked by all of this uncertainty and volatility, where should you turn? Below, I highlight an investment theme that’s immune to virus outbreaks and market gyrations. First, let’s review the latest headlines and what they mean for investors.

Then the bad news came Thursday, pummeling stocks and sending investors to safe havens such as gold. As I’ve warned you in previous columns, this virus can go in any direction…and drag the markets along with it.

Read This Story: Coronavirus: How Bad Can It Get?

Federal Reserve Chair Jerome Powell has been doing his part to reassure investors. Powell yesterday in Senate testimony underscored his faith in the resilience of the record-long U.S. economic expansion, now in its 11th year.

As Powell stated in front of the Senate Banking Committee: “There’s no reason why the current situation of low unemployment, rising wages, high job creation…there’s no reason why it can’t go on. There is nothing about this economy that is out of kilter or imbalanced.”

Regardless, President Trump has renewed his pressure on the Fed to again lower interest rates, but after three rate cuts in 2019, further easing is unlikely in 2020.

The U.S. central bank considers its current target range for short-term borrowing costs, between 1.5% and 1.75%, as appropriate to support the expansion. The unemployment rate stands at a 50-year low of 3.6%, wage growth is coming in at about 3%, and gross domestic product (GDP) growth hovers at 2%. It’s a “Goldilocks” scenario that’s not too hot, not too cold.

That said, Powell in his remarks this week to the House and Senate didn’t play the role of Pollyanna. He cited areas were the economy’s performance is unsatisfactory, notably in the areas of wealth and income inequality, as well as labor force participation. He also reiterated warnings about the rising federal deficit.

Whipsawed by the headlines…

China on Wednesday confirmed 2,015 new cases of the deadly influenza-like virus, the lowest daily increase since January 30. The news assuaged investor anxieties about the virus’ possible damage to the Chinese and global economies. But then came Thursday’s shocking spike in reported deaths and infections, which sent investors running for the exits.

China is the world’s growth engine, so when the country gets the flu, the rest of the world sneezes.

The closest example to the coronavirus outbreak is the severe acute respiratory syndrome (SARS) outbreak in China in the early 2000s. SARS caused an eventual 8,098 cases, resulting in 774 deaths reported in 17 countries.

The following chart, released February 12 by the research firm Statista, shows the extent of the damage that SARS exerted on economies around the world. The data provide a useful benchmark for assessing possible economic damage from the coronavirus: 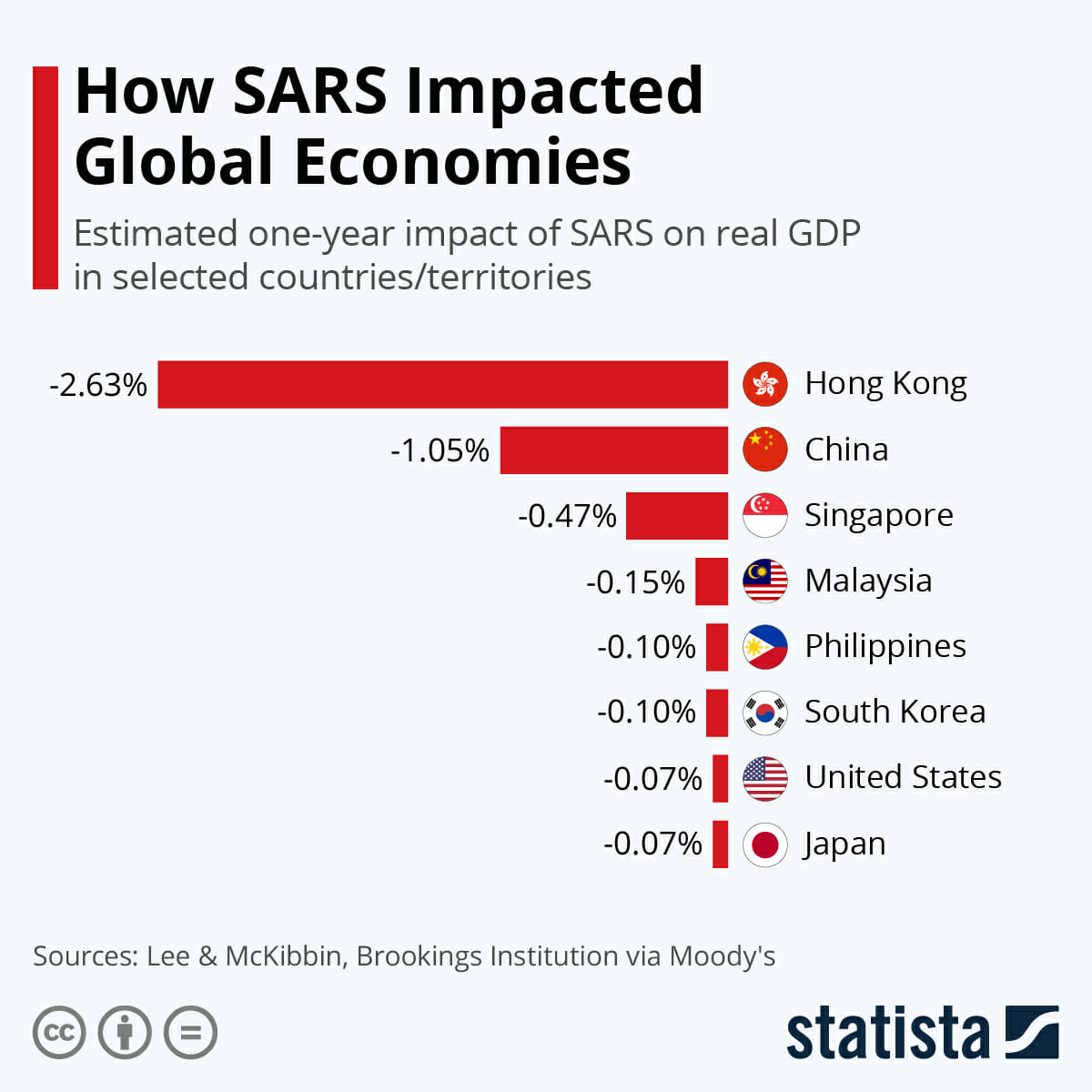 The bellwether commodities of copper and oil have been fluctuating in price, depending on the news about the virus. Buoying investor optimism has been better-than-expected corporate earnings results so far for the fourth quarter of 2019. Estimates have swung from the red and into the black, as more and more companies surprise on the upside.

Wall Street’s bulls are about to get tested by key economic reports. Keep an eye on retail sales and industrial production, both due for release on Friday. Equity valuations are high and stocks could tumble if the data prove disappointing. Moreover, the virus already is taking its toll on estimates for first-quarter 2020 earnings.

Under these dicey conditions, where’s a shrewd place to invest your money? Today, I want to focus on media/telecommunications companies that are in the vanguard of streaming technology. These technology-intensive stocks can provide your retirement portfolio with growth, income and a measure of stability.

Read This Story: The Streaming Wars: Who Wins, Who Loses?

However, media/telecom companies have become growth-and-income bedrocks. They’re evolving into vertically integrated creators and providers of streaming content, which fuels revenue and profit growth. As their cash hoards have grown, they’ve returned that wealth to investors in the form of dividends.

Lots of cash on hand provides these giants with a cushion for the market correction many analysts see ahead. It also allows them to make the consistently strong internal investments that are necessary for them to maintain their competitive edge.

The expansion of smartphone capabilities, the cloud, the Internet of Things, virtual/augmented reality, and artificial intelligence are powerful multi-year tailwinds that ensure earnings growth and cash-rich balance sheets for these media/telecom stalwarts. The advent of ultra-fast 5G technology only makes their prospects brighter.

We’ve put together a new report on the media/telecom companies that will reap the lion’s share of profits from major tech trends, such as streaming video on demand. If you’re worried about market panics, these companies can inoculate your portfolio. To view our report, click here now.